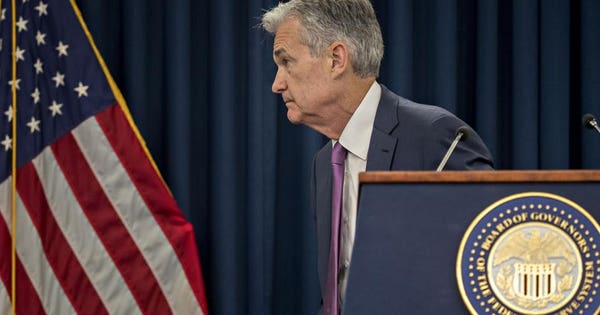 Jerome Powell, chairman of the U.S. Federal Reserve. The future actions of the Fed will have a key impact on bond markets. Photographer: Andrew Harrer/Bloomberg

We’re now firmly into a rising interest rate cycle in the U.S. With several bond metrics approaching extreme levels relative to recent history, here are a few things to be aware of, and how they may impact the performance of your investments.

Yield spreads are at low levels

Often you can boost your yield by 1% or even 2% by owning longer term bonds. However, currently this isn’t the case. You’re getting paid an extra 0.3% or so for holding a 2 year rather than a 10 year bond right now. That’s a small difference relative to much U.S. history. Does that make longer term bonds unattractive? Not necessarily. It really depends how you expect interest rates to move relative to the market’s expectations.

If you think the Fed will continue to hike rates in the coming few years, then yes, owning shorter term bonds make more sense as they are less likely to decline in value as interest rates go up. However, if you think a recession and an accompanying cut in rates is a reasonable possibility, then you may want to be at the longer end of the curve. Cuts in interest rates will likely boost performance of longer term bonds.

For example, you can currently earn 2.5% on Vanguard’s short-term Treasury Exchange Traded Fund (ETF) which has an average maturity of 2 years, but only 2.8% on the Vanguard intermediate-term Treasury ETF which has a maturity of 5.6 years. So, you aren’t earning as much as you typically can by holding longer maturity bonds. As a result, owning longer term bonds probably requires a more negative view on the overall economy and the prospects of recession. Otherwise you may end up getting hit by rate increases reducing your bond’s value. This could offset the slight premium you’re getting on yield. It’s perhaps not surprising then, that the bond market is suggesting a recession may be closer than many think, and more likely than the Fed’s own projections imply.

So are credit spreads

Just as you aren’t getting paid much to own longer term bonds, so you aren’t getting paid much extra to own riskier bonds either. For example, bonds rated BBB are currently trading at a relatively low premium of around 1.5%, we hit a notable low earlier this year of 1.2%, but during the last recession these spreads blew out to 8% and hitting 3% during minor panics is not unusual in recent years. So just as you’re not earning that much in the bond market for owning longer term bonds, so you’re not earning much additional income by taking credit risk either.

Again, we can see this in ETFs.  If you hold Vanguard’s Intermediate Term Treasury ETF your yield is 2.8% but if you hold the Vanguard Intermediate Corporate Bond ETF your yield is 4.1%. The duration of these two bonds is similar, so the impact of interest rate changes broadly cancels out. As a result, you’re getting paid an extra 1.3% for taking credit risk, similar to the credit spread data. Again, in a recession or weak growth environment some corporations can face difficulties making their interest payments. As a result you once again need to have a pretty favorable view of the economy to want to take credit risk because, currently, the market isn’t giving you much compensation for doing so.

Nonetheless, even though in the U.S. you aren’t earning much extra in yield by holding longer term bonds or taking credit risk, you definitely are seeing a big difference between what you can earn on U.S. government debt and German bonds. Currently, the Treasury 10 year bond is flirting with a 3% yield, but the German bond pays just 0.4%. That difference of 2.6% is certainly at the high range of what we’ve seen over recent decades and one reason the U.S. dollar has had a good run so far in 2018. This is because foreign investors typically buy dollars to capture relatively higher U.S. debt yields. A normal range based on history is for the two bonds to track each other reasonably closely, with yields within 1% or so of each other. This has two implications. Firstly, it makes sense to keep your fixed income investments in the U.S. currently because of the improved yield prospects. However, it also sounds a note of caution on the dollar. If the difference between U.S. and German interest rates narrows then that’s one reason investors may be less inclined to hold dollars, so the case can be made to consider holding international stocks, but probably not bonds currently if you’re a U.S. investor.

Certainly, tweaking your bond portfolio too much can be counter-productive. However, currently it appears you are receiving less than you normally would in terms of extra yield for taking duration or credit risk. Nonetheless, even if you aren’t making investment changes, knowing what the bonds markets are telling you can be instructive. Currently, the bond markets are suggesting that they think something may happen in the not too distant future to stop the Fed raising rates. However, interestingly when and if that occurs markets aren’t too worried about the prospects for corporate bonds. So the bond markets appear to be sounding a note of pessimism perhaps looking beyond the strong economic data we’re currently seeing, but equally the bond markets aren’t going so far as to signal any sort of crisis right now.