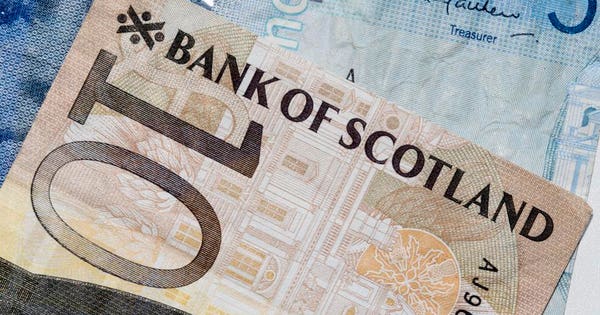 Detail of banknotes from the Bank of Scotland, which in 2016 began issuing new banknotes on polymer starting with the £5 note. (Photocredit: Getty).Getty

How many exchanges does the world need? Now with plans being unveiled to launch a Scottish stock exchange, Bourse Scot, next year in an initiative dubbed “Project Heather”, it is a question I have again been mulling. Depending on who you speak to you’ll get different answers and probably there is no definitive answer.

The new exchange venture is headed up by Edinburgh-based financial entrepreneur and broker Tomás Carruthers, who was founder and CEO of the Interactive Investor platform, and would be the first Scottish stock exchange since the early 1970s.

But a network of exchanges had operated north of the border from the 1840s up to 1971, before being consolidated into a Scottish Stock Exchange. There were exchanges that operated in Aberdeen, Edinburgh, Dundee, Glasgow and Greenock. And, subsequently in 1973 the Scottish exchange was absorbed in to the London Stock Exchange.

Bourse Scot and its backers have struck a partnership deal with Euronext, the operator of markets across Europe, for its technology platform (Optiq), which Euronext Technology Solutions leverages and sells as a license to third parties. The agreement, which was signed last week but announced this week, would enable Bourse Scot’s model to use the trading platform.

In 2018, Euronext, a leading stock exchange operator, had some 1,300 issuers on its markets representing a €3.8 trillion market capitalization.

Carruthers, a Cambridge graduate, said the deal with Euronext paved the way for it to apply to the U.K.’s Financial Conduct Authority (FCA) for approval and talks are underway with Scottish Enterprise to secure Regional Selective Assistance funding with a view to creating around 60 skilled jobs.

The exchange would look to be based in Edinburgh, but it is understood there are plans to have offices in Glasgow, Aberdeen and other locations across Scotland. Its registered and trading address is 12, South Charlotte Street in the Scottish capital and the business was incorporated and registered in mid-June 2018.

Should FCA approval be granted, Bourse Scot expected to launch in the second quarter of 2019 and said it is already in discussions with a number of potential issuers, who intend to use it to raise investment. Further news on that front is expected in the next week or so, according to sources.

Of course, one only has to look back at the history in the past decade or so of alternative equity trading venues in Europe and the fragmentation in the exchange sector to take on the incumbents (London Stock Exchange (LSE), Euronext, Deutsche Boerse, SWX Swiss Exchange, etc), to see that many entities came and went. Borsa Italiana, Italy’s national exchange, succumbed to being acquired by the LSE for an enlarged London Stock Exchange Group.

The vast majority failed to pass muster, were unprofitable and only a few survived – before the latter were acquired by the big boys. But at one time some ten years ago across Europe there were around twenty alternative exchange operators besides all the national players. Take for example, Turquoise, which was acquired by the LSE, and Chi-X that eventually became part of BATS Europe (now CBOE Europe).

Admittedly there is Aquis Exchange operating in Europe out of London, which is lead by Alasdair Haynes, a Scot and formerly head of ITG Europe, who was once in the running to head up the LSE.  The bottom line for many upstarts was that there was simply not enough of the exchange trading cake to share around for all of the then new players. I wonder if it will be the same for Bourse Scot.

Aquis, which launched back in November 2013 as a pan-European cash equities trading MTF and has its shares now listed on the London Stock Exchange, saw the value of equities traded on its platform come in at €32.4 billion in November 2018. With a market share of 4.1% it set  a new record, but this performance was after five years in operation.

A vintage engraving of the Stock Exchange, Buchanan Street, Glasgow, erected between 1875 and 1877 and designed by John Burnet in the Venetian Gothic style. (Photo credit: Getty).Getty

Businesses wishing to raise funds on the new Scottish exchange will first need to demonstrate how the investment will deliver “social and environment” impacts, a factor Carruthers said investors were increasingly seeking.

“Stock exchanges play a vital role in bringing together investors and businesses seeking investment. In the 1960s there were five such exchanges across Scotland, enabling Scottish investors to directly fund business opportunities which, in turn, supported economic growth,” Carruthers said.

He added: “Fifty years on and the economic landscape in Scotland is very different. Growth sectors such as renewable energy and biotechnology have once again established Scotland’s standing as a center of global excellence. A Scottish stock exchange will ensure companies can continue to find the financing they need to reach their full potential.”

The entrepreneur further asserted that it was “clear there are strong regional economies across the U.K., and Scotland is thriving with the combination of global industrial leaders, world-class universities, and an established professional community.”

A number of the companies listed on the Scottish Stock Exchange back in 1971 retain a stock market listing today. They include A.G. Barr, John Menzies, Scottish Television (STV Plc) and Weir Group. And, the level of survival is particularly high among the sizeable contingent of investment trusts, most notably Scottish Mortgage Investment Trust, a constituent of the FTSE 100 index today.

According to a report titled “A Stock Exchange for Scotland”  (November 2018) on the merits of a new stock exchange for the country produced for Bourse Scot, had the Scottish exchange existed in 2017 and attained the market capitalization to GDP ratio of Portugal - the lowest country ratio (34.7%) among a list of ten European countries (from Austria to Switzerland), the report’s authors have calculated what that would have meant for Scotland in terms of market capitalization.

Nick Thornton, Head of Euronext Technology Solutions, noted: “We are delighted to have been selected for this important project. The Optiq service enables our clients to focus on business innovation and growth while relying on our established pan-European infrastructure.”

Mr Carruthers had been chief executive of the Social Stock Exchange, an initiative backed by former Prime Minister David Cameron as part of his Big Society campaign, until he left last year. The Social Stock Exchange’s pitch was to provide access to the “world’s first regulated exchange” dedicated to businesses and investors seeking to achieve a positive social and environmental impact through their activities.

Big Society Capital had invested £1.2 million (c.$1.52 million) in the Social Stock Exchange to develop market infrastructure, which it said would connect social impact businesses with investors looking to generate social or environmental change as well as financial returns from their investment. From reading that venture’s website it appears dated now and indicated activity had ceased.

A spokesperson canvassed at Euronext Technologies in London confirmed that Euronext has a purely “technology deal” with Bourse Scot Ltd rather than a strategic one and being involved in the business. Euronext also offers their technology solution (through Optiq) to two banks that operate pan-European cash MTFs (Multi-lateral Trading Facilities).

Hirander Misra, chairman & CEO of GMEX Group, a British-based technology and business services provider for traditional exchanges and cryptocurrency and digital token exchanges, commenting on the exchange landscape said: “Most smaller equity exchanges across Europe are struggling to attract both listings and secondary trading volumes, as the traditional exchange business has become one that is only viable with scale through some consolidation or regional interplay.”

Misra, formerly co-founder and COO of Chi-X Europe (part of CBOE Global Markets now), added: “The exchange [Bourse Scotland] will likely face some challenges as a start up with a Scottish focus to attract an adequate numbers of listings and secondary market liquidity to make it economically viable no matter what the national sentiment is in Scotland to have their own stock exchange.”

The fact that there are existing well established markets on its door step such as the London Stock Exchange, CBOE Europe, NEX Exchange and the International Securities Exchange as well as MTFs such as Aquis Exchange will make the task harder.

“This added to the fact that the exchange model is now rapidly evolving towards securities tokenization, which some think may lead to the traditional model being less relevant and even obsolete in the coming years,” Misra further ventured.

Interestingly though, the launch of the exchange in Edinburgh in 2019 comes at a time when the number of trading venues in the European Economic Area (EEA) comprising 31 countries as of 2016 – from Regulated Markets (RM) and others like Multilateral Trading Facilities (MTFs) and Organized Trading Facilities (OTFs) – appears to be far from shrinking.

Indeed, a list of such entities provided by the Paris-based European Securities Markets Authority (ESMA), currently reveals there to be 124 Regulated Markets in the EEA, 189 MTFs and 76 OTFs.

An OTF, a category of trading venue that was introduced under the Markets in Financial Instruments Directive (MiFID) II, is a multilateral system that is not an RM or MTF and where equities are not permitted to be traded. This could be multiple third parties buying and selling interests in bonds, structured products, emissions allowances or derivatives.

Roger Lawson, ex-chairman of the U.K. Individual Shareholder Society (ShareSoc) with around 3,000 members and an active equity investor, asked: “One wonders how they expect to gain any significant liquidity when as an investor you could trade via a big exchange and secure greater liquidity. Moreover, with best execution requirements it is questionable whether a better price could be obtained in Scotland on a Scottish stock exchange. Markets depend on size and so there is always an issue when launching an exchange to garner liquidity.”

The idea of a Scottish exchange is a nice idea and I say that as a Scot. Moreover, the thirty odd page study that puts the case for it is certainly well researched and gets one in the mood. Succeeding though in making it work might be harder than founders and Euronext Technology imagine.

As one senior executive at an MTF in Europe, who declined to be named, put it to me: “It is a very ambitious project and it is going to be very difficult to get any momentum in a small cap market in Scotland to be perfectly frank. While you can announce plans, fundamentally there needs to be some substance and backing from Scottish corporates as well as support from the government.”

Mind you, I would not be surprised if the Scottish government will not be actively encouraging and getting behind the venture in some way, especially with the Brexit deadline and a possible future referendum for Scotland being part of the UK, once Britain exits the EU.

The full study, “A Stock Exchange for Scotland”, which was undertaken by John Millar at Edinburgh University Business School together with Roger Mullin, Honorary Professor at the University of Stirling’s Management School, and Clare Thomson of Momentous Change can be read via this link.