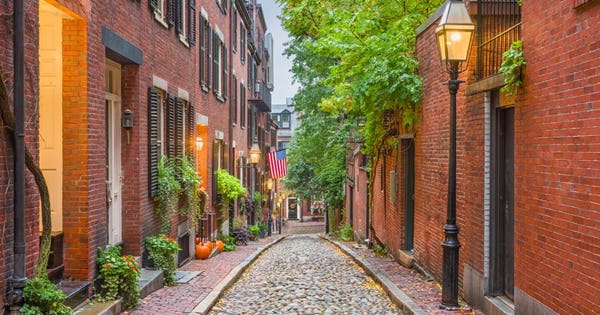 The brick houses of Acorn Street in Boston, Massachusetts, are trimmed with brownstone.Getty

Not everyone loves it. Author Edith Wharton called it “the most hideous stone.” New York’s Buildings Department once heard the complaint that it was “as if New York City were covered in cold chocolate.”Vincent Scully, professor emeritus of the history of art at Yale University, called it “not really much good as a building material.”

Brownstone is a soft sedimentary stone that is found in horizontal beds close to the earth’s surface in Connecticut’s Central Valley. It was deposited about 200 million years ago, when Africa and North America were wrenching away from each other to form the Atlantic Ocean. A series of continental rift basins, known collectively as the Newark Supergroup, formed as long, narrow, sediment- filled valleys stretching from Nova Scotia to South Carolina. One of them, the Hartford Basin, consists of deposits of sand and mud with a high feldspar content, cemented with ferric oxides, which give the stone its characteristic reddish-brown or chocolate-brown color.

Connecticut doesn’t have the only American brownstone; during the 19thcentury it was also quarried in Longmeadow, Massachusetts, in eastern New Jersey and Pennsylvania, and in the Apostle Islands off the Wisconsin shore of Lake Superior. But those are limited deposits that are steeply angled, difficult to quarry, with stone found to be variable in quality and appearance.

Brownstone was ubiquitous during the building boom of 1870 to 1890, when brownstone was the material that faced endless blocks of brick apartment houses in cities up and down the eastern seaboard. Brownstone was not the primary building material; it was a veneer applied to buildings constructed of brick, wood or other stone. The material’s name, however, was given to urban row houses, especially in New York, and many still refer to the later part of the 19thcentury as the “Brown Decades.”

If you’re lucky enough to own a brownstone building, or a house with brownstone lintels, steps, quoins, or sills, then you already know that water is the enemy of this porous stone. More specifically, what causes brownstone to spall – the word for its characteristic flaking – is water that freezes and thaws after it’s gotten between the stone’s sedimentary layers. This is most likely to happen if the stone is face-bedded, or applied to the structure with its layers perpendicular to the way they appear in nature. In the vast majority of 19thcentury row house construction, the brownstone, which was applied as a veneer over brick, was face-bedded.

Snow on the stoops of historic brownstone apartments in Crown Heights, Brooklyn. Moisture that gets between the stone’s layers leads to its deterioration.Getty

But other factors contribute to the problem. The New York Landmarks Conservancy points to too-hard mortar as a major culprit. It provides no give as the stone expands and contracts, thus causing the stone to crack. The organization recommends re-pointing with a mortar made of, by volume, one part white Portland cement, three parts sand and lime, and six parts sand and aggregate.

Re-pointing is expensive; prevention is less costly. A few tips:

• Make sure your brownstone is properly pointed and keep an eye out for areas that remain moist after rain or snow.

• Keep your roof in good shape so that the building stays dry; keep your gutters and downspouts clear so that they move water away from the house.

• Keep vegetation away from the walls: it prevents them from drying out.

• Don’t sandblast the walls or clean them with harsh chemicals. Waterproofing chemicals can trap moisture; avoid them. If your brownstone needs cleaning, seek professional advice.

• Caulk horizontal wash joints in projections such as window lintels or parapet walls.

• Do not use deicers to melt snow and ice on brownstone steps.

• Do not paint brownstone; it traps moisture behind it.

• Brownstone is not appropriate for any use below grade because it wicks moisture.