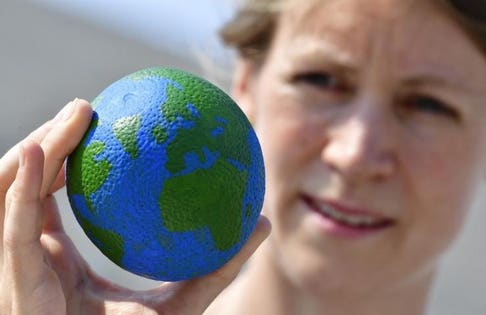 How much should you invest outside the U.S.? Photo: Tobias Schwarz/AFP/Getty Images)

One critical question for all stock investors is, what should my international exposure be? Unfortunately, here investors can be their own worst enemy. This issue may end up hurting performance, or increasing risk, or both. On average, U.S. investors hold around 15% of their stock portfolios in foreign companies, but academic research suggests that the correct level might be at least double that.

The basic problem is something called home bias. We like to hold what we feel comfortable with. Often that means favoring domestic investments over international ones. The average U.S. investor is more familiar with Facebook than Tencent and Exxon than Shell. That’s not surprising, because the former are U.S. companies and are well-positioned for U.S. markets. We see U.S. companies more during our daily lives and are more familiar with the working of U.S. businesses and the U.S. economy.

However, the revenues of Exxon and Shell are similar and the market value of Facebook of Tencent aren’t that far apart. Yet, someone who only invested in domestic companies would just hold such U.S. companies, excluding large foreign names. That matters from a diversification standpoint. It’s not to say that domestic companies are better, or worse, than foreign ones. Yet, by holding a broader set of companies you are unlikely to change your return, but may reduce your risk.

Professor Lewis of Wharton has found that a well diversified global stock portfolio, can potentially either cut your risk by a few percentage points a year, or improve returns for the same level of risk as just holding U.S. stocks by perhaps half a percentage a year. The exact numbers do depend on your assumptions and time periods, but this is about as close as you get in investing to a free lunch. It’s the principle of diversification in action. Yet, many U.S. investors don’t take advantage and load up too heavily on U.S. stocks alone.

One positive is that global diversification does appear to be getting better for U.S. investors. International holdings were very low in the 1980s, around 5% in the 1990s, but more recently have approached 15%. So international exposure is moving higher, but not especially fast. In part this because international investing used to be complicated and burdened with heavy transaction costs and other fees. However, now many funds make tracking a global index just as easy as tracking a U.S. version, and though fees may be slightly higher that now only amounts to perhaps 0.05% extra in expense ratios a year. The benefits appear to outweigh the costs.

What Is The Right Level Of Foreign Exposure?

Opinions vary on what your international allocation should be. Certain academic models put it at around 30%. If you look at the relative weights of U.S. and foreign stocks in the global market you arrive at a 50% weight. At the extreme if you were to weight your portfolio on a more fundamental basis such as by global economic activity, then the international exposure would have a weight of 75%, in fact Stanford, Harvard and Yale appear to have far more in foreign stocks than U.S. ones. Either way it is telling that all these methods suggest an appropriate international stock weighting is far more than the current 15% average.

On notable exception to this general view though are investing luminaries Warren Buffett and Jack Bogle, both are fine recommending buying only U.S. stocks.

The Case For Domestic Only

Let’s examine why investors may want to stay in the U.S. Perhaps the most persuasive is that U.S. companies are already global enough. For example, Apples sells products globally, hence there’s no need to own stocks overseas. If, for example, China does well, it will appear in growth in Apple’s sales.

There is some truth to this argument, but it has some weaknesses. First off, though some U.S. companies are global, not all are. In addition, U.S. companies tend to represent certain parts of global industry and not others. For example, by only owning U.S. companies you’ll likely end up holding a lot of technology firms, but being underrepresented in other important parts of the global economy. Plus, even though many U.S. firms sell their products and services overseas, for most U.S. companies, the U.S. is, unsurprisingly, still their largest market and so there is still a bias to the U.S. relative to other markets. Finally, many issues such as tax, politics and trade policy are unique to countries you invest in, and so by holding just one single country you are loading up on those potential risks, when you could diversify them, or spread your bets, by being more global.

Another reason investors are tempted by focused U.S. exposure is simply because the U.S. has seen strong stock market performance over the past decade relative to other countries. This is true, but unlikely to predict similar success in the future. In the past we’ve seen the fortunes of the U.S. relative to other markets rise and fall, and current U.S. market valuations suggest foreign markets may represent better value in the coming years. The recent success of the U.S. relative to foreign markets seems unlikely to recur in future years.

So, there are reasons to favor the U.S. but none seem too compelling. The U.S. may be fairly diversified, but it can’t match a global portfolio, and as you often here past performance is not a reliable indicator of future performance, so the recent good run for U.S. stocks is unlikely to continue indefinitely relative to other markets if history is any guide.

If you’d like to be globally diversified in your portfolio then there are a few ways to get there. The easiest is just to purchase global stock funds, these will include both U.S. and foreign investments and you won’t have to worry too much about the process. For example, if you owned the Vanguard Total World Stock ETF, you’d get 47% of your money invested overseas with Japan, China and the U.K. being other countries your money would be put to work in. The expense ratio on this fund is 0.1%, so that’s $10 a year for every $10,000 you invest. That’s a little more than some domestic funds, but not by much and there are even free fund options available now if you’re very cost conscious.

However, if you don’t want a single solution and would like more control on your international exposure, you can own a fund such as the iShares Core MSCI International Stock ETF. This holds only foreign investments, and the expense ratio is again low at 0.10%. In this way you could choose how much you wanted invested overseas, rather than have it set at around 47% currently by the Vanguard fund above. As mentioned early, 30% may be a good starting point for international stock exposure, but the case can be made to go higher if you are cautious on current U.S. stock valuations.

Finally, being potentially too focused on domestic investments is not just a U.S. problem. Studies have shown that Japanese and British investors tend to load up on their own country’s investments too. Nonetheless, global diversification appears to be one of the few free lunches available to investors. Now, as fund costs keep coming down it’s cheaper to implement than ever.

Subaccounts: As Good As Their Clone Funds?
Can You Get a Home Equity Loan Without Fees?
Muni yields fall on back of UST strength
RWE warns UK tax on electricity generators would risk £15bn investment in renewables
Philippines’ economic tsar brushes aside fears of ‘cronyism’ under Marcos Jr