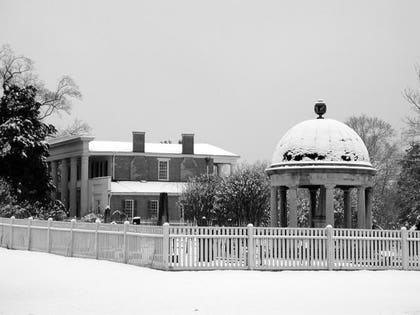 Beside their Greek Revival mansion outside of Nashville, Tennessee is the tomb of Andrew and Rachel Jackson.The Hermitage

Visiting the homes of famous Americans has been a favorite American pastime since before the advent of the automobile. However, cars made these pilgrimages a lot easier, and for many children, summer vacation meant a road trip to Mount Vernon or Monticello to see something beautiful while (hopefully) absorbing some history.

But until recently, they only saw a small part of the story. Historic house museums worked strenuously to tell the stories of the lord and lady of the manor, their children, friends and neighbors, while they ignored and avoided talking about the people who did the work. In many grand historic American houses, and in all of the ones south of the Mason-Dixon line, enslaved African Americans did the work.

Today’s house museum visitors want a more complete picture, and the institutions are responding. One is The Hermitage, Andrew Jackson’s home 10 miles east of Nashville, Tennessee. The seventh President of the United States owned the plantation from 1804 until he died in 1845, though he only lived there sporadically until he retired from public life in 1837. He and his wife, Rachel, lived in a log cabin until 1819, when he built a two-story federal mansion. When that house was nearly destroyed by fire in 1834, Jackson built the 13-room Greek Revival house we see today on the same site.

The Hermitage was a 1,000 acre, self-sustaining plantation that relied entirely on the labor of enslaved African American men, women, and children to produce the cash crop, cotton. It also needed their labor to build the house and to keep it running. In 1804, Andrew Jackson owned nine enslaved African Americans. 25 years later, that number had increased to more than 100 through purchase and reproduction. At the time of his death in 1845, Jackson owned approximately 150 people who lived and worked on the property.

For almost 200 years, their stories remained untold. Archaeologists began uncovering the mysteries of their lives at The Hermitage in the 1970s. Since then, nearly 800,000 associated artifacts have been discovered, analyzed, catalogued and curated. The archaeologists have also located the foundations of thirteen slave dwellings in three different areas of the property.

Few slave cabins remain, but today’s visitors to grand homes like the Hermitage want to know about the people who did the work.The Hermitage

Only one actual slave cabin survives. It is known as Alfred’s Cabin because Alfred Jackson, formerly enslaved, lived in it as a free man until his death in 1901. Recent studies suggest it may have been built as early as 1841.

Visitors to The Hermitage find Alfred the slave’s cabin as interesting as the grand home of his owners.The Hermitage

It is not much, but it’s a start. Today’s visitors still tour the grand house, but many of them find more to see in Mr. Jackson’s simple one-room cabin.

Political Ads Targeting Inflation Ahead Of Midterm Elections Could Force The Fed To Keep Hiking Rates: Goldman Sachs
Forget the Forecasts, the U.S. is Already In a Recession… Here’s How to Profit From It!
The top 3 trends of tech that investors need to know – Martin Migoya
Coursera Growing, But Shares Still Slowing
Prenups are rare. Here’s why that’s bad for wealth management