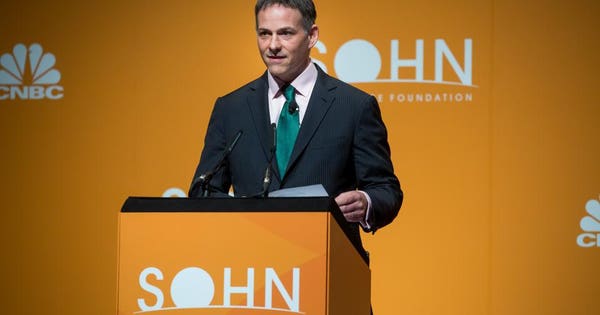 Famed hedge fund investor David Einhorn is having a brutal year. He’s down over 18% in 2018, posting one of the worst performances in the entire hedge fund industry. Surprisingly, it could have been worse for Einhorn.

Despite his losses, Einhorn actually dodged a big bullet in 2018. He wasn’t caught short on one of this year’s high-flying stocks, Athenahealth. It opened the year in the mid $130s and surged as high as the $160s by midyear, before fading to its current price of $150.

For years, Einhorn has railed against Athenahealth and its former CEO Jonathan Bush. At the Ira Sohn Investment Conference in May 2014, he highlighted the health record software company as the most egregious among “a narrow group of cool kid stocks” that later became more prominently known as his “bubble basket.”

In a 66-page presentation, Einhorn portrayed Bush as a promotional CEO who’d hoodwinked investors into believing Athenahealth was a cloud software company, though he believed it to be a less exciting business-process outsourcing company for health records. Einhorn predicted Athenahealth could drop 80% as sales slumped and its cloud multiple compressed.

It turned out to be a good short, especially in a red hot market where valuations have surged. Subsequent to his Ira Sohn pitch, Athenahealth had problems winning sales to keep up with investors’ lofty expectations, and its stock languished.

The only problem for bears came a year ago in the form of activist hedge fund investor Elliott Management, which took a large stake in the company and called for its sale. When Athenahealth and CEO Bush slow-played Elliott, the fund then floated a $6.5 billion, all-cash buyout bid at $160 a share this May.

Soon after, Athenahealth’s colorful pitchman Jonathan Bush was felled by the “Me Too” movement, only hastening expectations of a looming sale. After Bush’s ouster, Athenahealth confirmed it was seeking strategic alternatives, code name on Wall Street for a sale.

Einhorn, despite his troubles in 2018, generally sidestepped the Athenahealth spike this spring, apparently having closed exposure to his short trade at some point. Athenahealth hasn’t caused Greenlight losses year-to-date. And now he is redoubling his bets against the company. In a monthly letter dated July 31, Einhorn told limited partners he reopened the short, doubting Elliott will come through on its buyout offer, or that a heftier strategic bid will emerge. Here’s what Einhorn told his investors:

Athenahealth (ATHN) is another position of note. Though we have been short for several years, we managed to trade around it such that it has not been a material loser in 2018. This quarter, an activist forced out the CEO and convinced the company to put itself up for sale. Notably, the activist indicated that it would be willing to pay $160 a share and possibly much more pending due diligence. Our take is that the activist has little interest in actually buying the company, but hopes someone else does. The risk is that the other buyers realize that ATHN is not a SaaS company, but rather a business process outsourcer in a mature market that already cut costs to the bone last year in response to the activist. The prospective buyers might also waver should they conclude that many of the best employees were personally loyal to the now deposed CEO. We have used the recent spike to re-short some shares that we covered previously.

As one of the most feared and persistent short sellers of this era, Einhorn isn’t light on conviction or analysis. It took almost a decade for his bet against business development company Allied Capital to pay off famously during the 2008 bust. When criticizing the likes of Lehman Brothers, Einhorn has also stood his ground amid significant pushback. Even now, he’s preparing to dig in his heels in a
and Amazon-fueled market that’s proven to be perplexing for short sellers and those long value stocks.

“We have been accused of being stubborn, but one person’s stubbornness is another person’s discipline,” Einhorn told his investors in the July letter. He professed no interest in changing course, stating “we will continue to be disciplined.”

Short Athenahealth in face of a sale process and an unsolicited (but conditional) cash offer from Elliott Management certainly proves the point.

Steadier tone ahead of uptick in supply
Toyota recalls EV fleet as challenge to Tesla dominance suffers setback
Cardano Vasil Hard Fork Postponed to Allow for More Testing
The Fed’s Rate Increases: Too Little Too Late?
Divorcing With A SLAT – 5 Things You Should Know