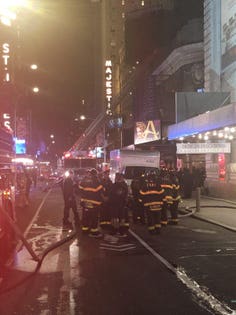 Despite slowing sales of Anastasia at the box office, the Broadhurst Theatre remains a hot venue.

Several hours ago, a small fire broke out in the lower lounge of the Broadway theater. Deputy chief Joseph Ferrante and his team of firefighters from the New York City Fire Department responded to the alarms, and extinguished the blaze within an hour.

According to one person who inspected the damage, the area is “bad, but not too bad.” The basement has “water all over the place,” he said, and people will be be cleaning up the mess throughout the night.

Officials from the Shubert Organization, which owns the 101-year-old theater, are not yet certain about the cause of the fire. Its current tenant, Anastasia, did not have a scheduled performance, and the historic Broadway house should have been empty for hours. The local fire marshal is now investigating the incident.

The small fire and street closure did not stop audiences from attending a preview performance of To Kill a Mockingbird at the Shubert Theatre next door. But, a few minutes after the curtain went up, a member of its backstage crew complained that there was too much noise coming from the Broadhurst Theatre.

It is expected that theater owner will submit a claim to its insurance company to cover the cost of repairing the damage. The Nederlander Organization, for example, submitted a claim

to its insurance company in 2013 when a repairman tinkering with the security sprinkler system in the Marquis Theatre between performances of Evita hit a sensor, and released gallons of water into the musical pit, causing almost $200,000 worth of damage.

“It looked like the Titanic,” recalled one of the lead producers, Hal Luftig. “Sheet music was floating on this gross puddle,” he said.

However, unlike how Evita cancelled a performance to repair the damage, Anastasia will not be not affected. “The show must go on,” declared a Shubert official.