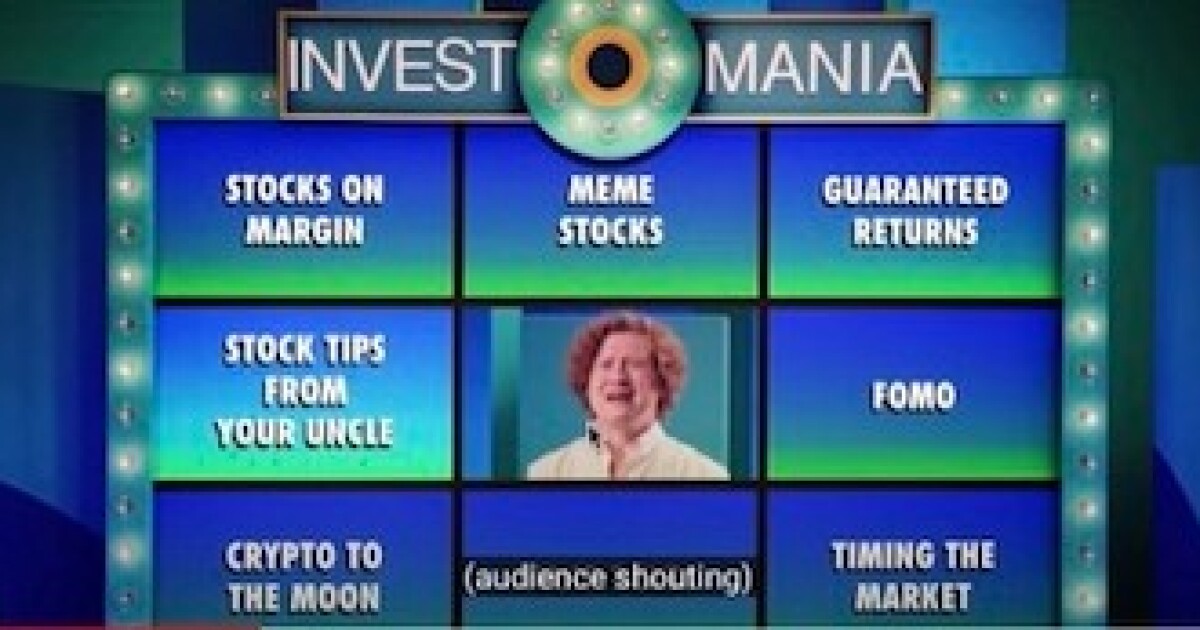 That’s the new approach the SEC is taking to educate people who buy and sell risky stocks frequently or on a whim, often on apps like Robinhood Markets. The digital retail brokerage, an object of scrutiny for its game-like look and feel, offers fast, free trading on a platform full of animated graphics that critics say encourages excessive risk-taking.

In a bid to counter such “gamification,” Wall Street’s regulator unveiled on June 1 a consumer education campaign whose main component is … a game show.

Tacky leisure suit
The anchor of the SEC’s digital effort is “Investomania,” a cheesy television show hosted by a man in a peach-colored leisure suit and fake tan. With a grin, he asks contestants to pick among nine investment options on an electronic board. Ranging from “stocks on margin” and “guaranteed returns” to “FOMO” and “tulip bulbs,” all of the choices are bad. Contestant “Brad,” who looks like a college student and is already down $5,250, hollers enthusiastically, “I’ll take meme stocks! Invest!” A red “X” buzzer sounds, Brad immediately loses another $10,000 and a cream pie smacks him in the face.

Next, it’s his opponent’s turn. “I’m going to do some research first,” “Julie” says, declining to invest in any of the options. “We can do research?” a clueless “Brad” asks. A voice then intones that “investing is not a game” before referring viewers to investor.gov for research tips.

The twist of the SEC’s approach is not lost on industry experts.

“Yes, they’re sort of doing the very thing they’re criticizing,” said Scott Smith, the director of advice relationships at Cerulli Associates. “But the end goal is different.” While Robinhood “is gamifying to create revenue,” he added, the SEC “is gamifying to educate consumers.”

‘Free stock!’
Robinhood has drawn scrutiny over whether its playful features — some no longer in existence — encourage inexperienced investors to make ill-considered moves, often with complex products like cryptocurrencies and options that can lose big money. In an age where posts on Twitter, TikTok and Instagram routinely dispense financial advice, investing from a recommendation on social media can lead to unhappy outcomes.

Last August, the SEC called for comments on “digital engagement practices” in financial services, including behavioral prompts, marketing techniques, gamification features and the design elements of retail-facing websites, portals and apps. In March 2021, a Senate Banking Committee hearing centered on Robinhood and its role in the once-exploding price of GameStop, a “meme” stock that rose 25-fold in January 2021 after small investors hyped the company on a Reddit page, WallStreetBets. Massachusetts regulators first accused Robinhood of “predatory practices” that made investing like gambling in 2020.

Until March 2021, Robinhood offered a digital deluge of colorful confetti to cheer an investor’s first trade or referrals of friends to the brokerage. Today, its website and app have features including rewards for inviting friends and family to the app. “Pick your free piece of stock! Earn up to $200 in stock for every referral!” the company says, with animated Rubik’s cubes levitating above Fortune 500 corporate logos. “You can get up to $1,500 in a year from referring friends,” it adds. One referral link sends users to Twitter.

Zero-commission brokers like Robinhood, Schwab and E*Trade are also under SEC scrutiny for payment for order flow, in which market makers pay brokerages to funnel customer orders to them instead of to exchanges. The practice can mean a retail investor doesn’t get the best price.

Publicly-traded Robinhood didn’t respond to a request for comment.

Risk, shmisk
Other videos in the SEC campaign warn about celebrity endorsements of cryptocurrencies, the chimera of guaranteed returns and the danger of borrowing money from a brokerage to buy stock, known as investing on margin. It’s a message many financial advisors hew to but sometimes struggle to get clients to grasp.

Jim Crider, the CEO of Intentional Living FP in New Braunfels, Texas, said that while game-like features that introduce people to responsible investing can potentially be helpful, they can also turn things into a casino, not a long-term plan.

“We’ve seen with young investors a conversion of investing into speculation, thanks to over-gamification,” he said.

Lori Schock, director of the SEC’s Office of Investor Education and Advocacy, said in a statement that “we continue to look for creative and memorable ways to reach and educate investors, and we hope this year’s public service campaign, with its lighthearted approach, will attract the attention of all kinds of investors.” Investors, the statement added, “are inundated with a lot of so-called ‘investment advice,’ and we encourage investors to outsmart the chatter by doing their own research.”

The regulator is trying to drive ordinary investors to investor.gov for detailed overviews of investing and finance, including fees, product types and retirement plans. In the process, it’s battling financial advice dispensed on Twitter, TikTok, Instagram and other outlets. “SEC posts video mocking retail investors as game show idiots,” scoffed one WallStreetBets poster. Another wrote of the government agency, “worst part is, your tax money paid for that content … the whole entire market is a meme stock.”

In January 2021, as small investors sent shares in GameStop soaring after hyping them on social media, the SEC warned in an investor alert that “retail investors should understand that all investments have risk, and that short-term investing in a volatile market carries significant risk of loss.”

Robinhood has a different take on risk. Its “What’s the stock market?” module says: “Myth: Investing is gambling. The truth is … it’s up to you. The stock market can be whatever you want, whether that’s a place to build wealth over time, or a place where you make big, risky bets.”

Isn’t it ironic
Whether it’s game-like investing apps or the SEC’s game show, “the human mind is very influenced by simple sound bites, vivid and salient images and dramatic narratives,” said David Hirshleifer, an economics professor at USC’s Marshall School of Business in Los Angeles who specializes in behavioral finance.

At the same time, he added, “it is extremely ironic” of the SEC “to use a game show format as a way of combating investor reliance on memes.” While he said it can “potentially make sense” to fight fire with fire, doing so “can legitimize the idea that it’s good to think casually about investments and to treat it as entertainment.” The SEC didn’t respond to requests for comment.

Smith of Cerulli said that amid the explosion of social media, getting the attention of Main Street investors, especially younger ones, is an uphill battle. “To get any form of connection or engagement, it has to be amusing or exciting,” he said. “No one reads the 50-page disclosures.”