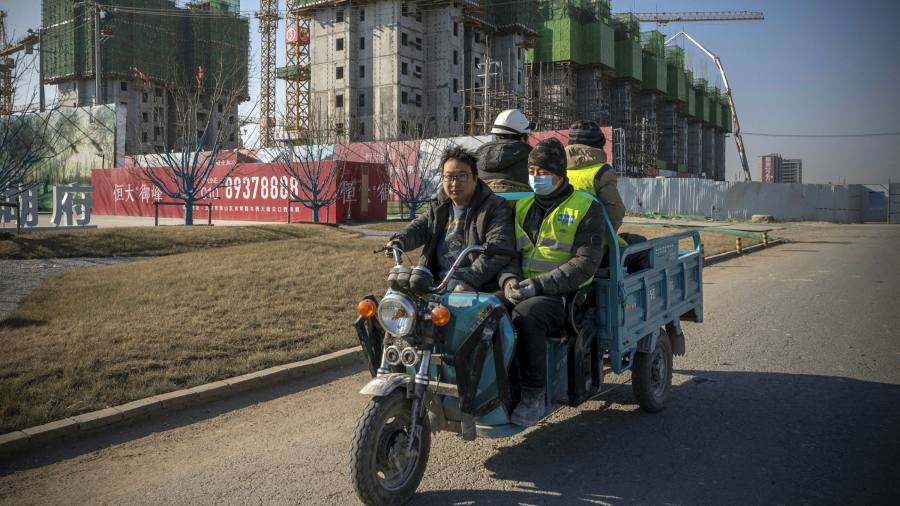 China will release its estimates for fourth quarter and full-year gross domestic product growth on Monday at a critical economic and political juncture for President Xi Jinping, who is seeking an unprecedented third term as head of the Communist party, military and government.

The party’s politburo last month emphasised the importance of stabilising the economy and financial system, which have been jolted by a downturn in the property sector. But it did not signal any intention to ditch the policies that have led to defaults at Evergrande and other big developers.

Striking a balance between stability and fiscal discipline will test Xi’s economic team, led by vice-premier Liu He, over the coming months.

Here are five things to look out for at the release.

Will quarter-on-quarter growth be close to zero or more than 1 per cent?

On a quarterly basis, China’s economy grew just 0.2 per cent in both the first and third quarters of last year and 1.2 per cent in the second quarter.

The quarter-on-quarter figure is a far more accurate measure of the economy’s health than year-on-year headline figures, which have whipsawed down and then back up because of the Covid-19 pandemic.

Full-year growth for 2021 should easily exceed the official target of 6 per cent. But another low quarter-on-quarter reading will put pressure on Liu and the central bank, which he in effect controls as head of the governments’ Financial Stability and Development Committee, to do more to boost growth.

Is the outlook for the property sector continuing to deteriorate or stabilising?

This is consistent with Xi’s pledge to bring “common prosperity” to one of the world’s most unequal countries in terms of wealth distribution. But it could also trigger unintended economic consequences if prices fall too rapidly.

The sector is estimated to account for more than one-quarter of total economic output. Its woes over recent months have been reflected in slowing fixed-asset investment, which increased 5.2 per cent year on year in the January to November period.

That was slower than projected and well below the 7.3 per cent year-to-date figure for September, when it became evident that leverage limits imposed on developers in 2020 were likely to push Evergrande into default.

Is the party’s zero-Covid strategy sustainable or about to inflict unacceptable costs on the economy?

China’s export sector has performed robustly ever since coronavirus was effectively contained in the first half of 2020. Periodic lockdowns in crucial manufacturing areas and at large ports to contain local clusters have not dented overall export growth, which has been consistently strong.

But this could change as the more transmissible Omicron variant threatens to trigger ever more lockdowns, which alongside the property downturn has damped consumer sentiment. Retail sales increased just 3.9 per cent in November year on year, well below consensus projections of 4.7 per cent growth.

This week, Xi’an, a provincial capital with a population of 13m, and two smaller cities are under complete lockdown. Two other large cities, Tianjin and Shenzhen, are enforcing partial lockdowns to facilitate citywide testing.

The party, however, is unlikely to relax its uncompromising approach to pandemic control until a congress — likely to convene in October or November — formally endorses Xi’s third term in power.

Will the increasing pressure on China’s economy lead to a more forceful monetary policy response?

China’s central bank cut its benchmark one-year loan prime rate for the first time since April 2020, but only by 5 basis points. It also did not alter the five-year benchmark used to price mortgages.

The People’s Bank of China has preferred to use targeted reserve rate cuts in an attempt to direct credit towards favoured sectors of the economy, such as agriculture and high-tech manufacturing, rather than resort to “flood-like stimulus” that would undermine its efforts over recent years to rein in high debt levels.

Will China’s demographic peak arrive even earlier than expected?

The National Bureau of Statistics is likely to announce its preliminary estimate for the country’s 2021 birth rate, or the number of births per 1,000 people. This fell to 8.5 in 2020 from 10.5 the previous year, the first time the rate dropped below 10.