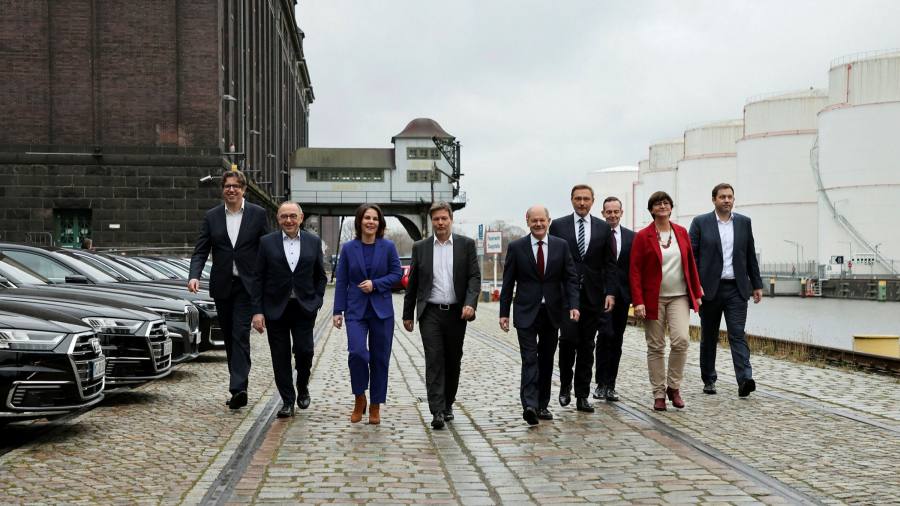 The wait is over. Germany has a new government, Olaf Scholz is set to become chancellor, Christian Lindner from the pro-business Free Democrats scoops up the finance ministry, Green leader Robert Habeck will be the minister for economy and climate, with co-leader Annalena Baerbock as foreign minister.

I’ll unpack what the coalition agreement has to say on EU topics, including the banking union, rule of law and why the Greens got in a bit of a pickle over the future of European Commission chief Ursula von der Leyen.

We’ll also explore an ill-timed commission snipe at Italy’s draft budget and what it means for sensitive eurozone discussions on fiscal rules reform.

The largest group in the European parliament, the centre-right European People’s party, meanwhile, selected Maltese MEP Roberta Metsola as its candidate for the leadership of the parliament in January.

On the financial regulation front, the EU yesterday agreed to further postpone a set of rules on trades that fail to settle — which were agreed in late 2013 and were due to kick in beginning of February (More here).

In anti-vaxxer news, we’re exploring how the far right in Austria is fully embracing the conspiracy theories that have led to a spike in poisonings in the US from horse de-wormer Ivermectin.

With its 178 pages, the new German coalition agreement continues the tradition of lengthy pacts (the previous coalition accord was 175 pages long). On the content, the deal is also continuity rather than radical change.

The most significant policy shifts from the previous coalition government led by Angela Merkel’s Christian Democrats seem to be headline-grabbing measures such as the legalisation of cannabis for recreational use and the lowering of the voting age from 18 to 16. But on Europe, you’d be hard-pressed to detect huge differences. Here’s a look at what matters:

Advances in technology and funding have sparked optimism about mankind soon being able to harness the fusion reaction that powers the sun to generate clean, limitless electricity on Earth. This research field was first developed in the Soviet era but that has delivered little in six decades of research. (More here)

Age-old divisions over the eurozone’s budgetary rule book are beginning to heat up as finance ministries start dissecting each others’ 2022 spending plans, writes Mehreen Khan in Brussels.

Next month, EU finance ministers will have to sign off on the European Commission’s assessment of countries’ draft budget plans for next year. It’s a debate that will serve as an appetiser for how northern frugals and the high-debt southern countries line up on the tastier debate about what to do with the Stability and Growth Pact (SGP).

The commission seemingly threw a bone to the so-called Hanseatics yesterday, by warning that a number of high-debt countries are in danger of overshooting their fiscal restraints next year.

According to Brussels: “In several member states including some high-debt ones, the projected supportive fiscal stance is set to be driven by higher nationally financed current spending, or by unfunded tax cuts. In some cases, this is expected to have a sizeable impact on the underlying fiscal position.”

The language is unusually pointed for the commission’s annual end-of-year assessment. It’s likely to be leapt upon by frugal countries which are worried that the expanding debt burdens accumulated during the pandemic pose a serious risk to the eurozone’s wider financial stability.

Even more unusually, Italy was singled out as needing to curb its nationally financed spending and pursue a “prudent” fiscal policy. Like other indebted economies, Prime Minister Mario Draghi is being encouraged to use the billions of loans and grants provided by the EU’s recovery fund for investments and reforms instead.

The size of Italy’s debt burden — more than 155 per cent of gross domestic product — has long been a source of neurosis for the eurozone’s thrifty northern states. Previous Italian governments such as the populist-led coalition of Giuseppe Conte sparked tremors in the bond markets in 2018 by vowing to defy Brussels’ debt and deficit rules.

Draghi’s arrival has helped alleviate immediate fears about Italy’s public finances in hawkish finance ministries such as The Hague and Vienna, partly because of his plans to implement root and branch structural reforms in return for EU recovery cash.

But Brussels’ warnings that even Draghi’s government is at risk of spending money it doesn’t have, threaten to poison a looming debate about how best to rewrite the post-pandemic fiscal rule book before it has even begun.

As Austria prepared to go into yet another national lockdown this week, 40,000 Austrians took to the streets in Vienna on Sunday in protest. When the government collapsed amid scandal in 2019, only 6,000 demonstrated in the capital, writes Sam Jones, FT’s Switzerland and Austria correspondent.

The anger of the crowd — directed primarily at the government’s plan for compulsory vaccination from next February onwards — has not been lost on Austria’s long-established rightwing populists.

Austria’s Freedom party (FPÖ) has now gone all out as the party of opposition to lockdowns, vaccine certificates and vaccines.

Leader Herbert Kickl (who, ironically, is housebound with coronavirus) has compared the current government to both east-German communists and fascists, called for “unrestricted resistance”, and recommended horse de-wormer Ivermectin as post-infection treatment (that same false information has led to rising numbers of poisonings in the US).

For most of 2021, the party’s leadership equivocated on politicising the pandemic. A campaign built around opposition to lockdowns in 2020s important to Viennese municipal elections fell flat.

In September, a new party of vaccine sceptics, MFG, swept up 6 per cent of the vote in Upper Austria, taking a large portion of FPÖ supporters and signalling vaccine-scepticism as an increasingly powerful political touchstone.

A month later, with the ousting of conservative People’s party chancellor Sebastian Kurz, the FPÖ gained a political opening: Kurz had long resisted implementing tougher restrictions nationally, but his successor, Alexander Schallenberg, has not held back.

Many moderate conservative voters are deeply opposed to them, and as a result, are now seen by the FPÖ as turnable. The People’s party’s poll collapse means that everything is to play for. Bold bets may pay off.

It is a high-stakes course for the FPÖ to pursue, given lives are genuinely at stake. But with more than one in five Austrians still having refused even a first dose of the vaccine as of this week, the party is perhaps reasonably calculating that on this highly contentious issue, the odds are good that it can boost support from the 16 per cent vote share it recorded in September 2019, its poorest in a decade.

Other European populist movements will be watching closely.

What to watch today

Recommended newsletters for you