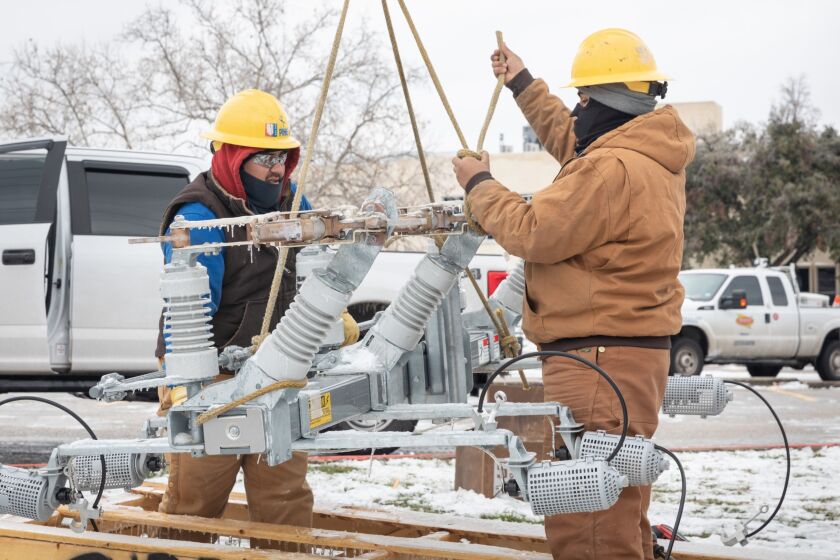 With winter coming on, Texas is still trying to overcome the damage from three days of freezing weather in February that crippled the state’s main power grid and undermined the credibility of its leaders.

According to a poll released this month, Texas voters disapprove of how state leaders have handled the reliability of the electricity grid.

In the October University of Texas/Texas Tribune poll of 1,200 voters only 18% approved of how state leaders handled the issue, and 60% disapproved.

“If there’s another even moderate infrastructure problem in the state in the grid or service delivery writ large that can be connected with the February outages and the failure of the Legislature to respond in a way that people expect it to be effective, it’s a real political problem for incumbents,” said Jim Henson, head of the Texas Politics Project at the University of Texas at Austin and co-director of the survey.

Republican Gov. Greg Abbott is facing a 2022 re-election challenge from Democrat Beto O’Rourke, a former congressman who said the grid failure motivated him to run for governor.

“Those in positions of public trust have stopped listening to and trusting the people of Texas, so they’re not focused on the things we really want them to do, like making sure we have a functioning electricity grid or creating the best jobs right here in Texas,” O’Rourke said.

The state’s power grid faced near collapse in February after days of sub-freezing temperatures that knocked unprepared power plants offline. Many residents faced a lack of heat and then water when their pipes froze.

According to the Texas Department of State Health Services, 210 people died because of Winter Storm Uri. Causes of death ranged from hypothermia to carbon monoxide poisoning and chronic medical conditions complicated by the storm.

The Federal Reserve Bank of Dallas estimated the state’s storm-related damage would range from $80 billion to $130 billion.

Several public power utilities were forced to issue long-term debt to cover the exponential increase in the cost of fuel supplies during the freeze. In some cases, the cost of natural gas was equivalent to the entire previous year’s tab.

Abbott said power supplies today are about 15% greater than they were during the February freeze.

The main Texas grid is the Electric Reliability Council of Texas, or ERCOT. The Public Utility Commission of Texas regulates ERCOT.

“I’m extremely confident the power grid is stable, and resilient, and reliable,” Abbott said in a statement at a recent economic forum. “I’ve been working very closely with both the PUC chairman and the head of ERCOT, as well as the team we’ve assembled at ERCOT. If you know all of the changes that they have already implemented, as well as additional changes they will continue to implement over the coming weeks, you will know we will have a robust, effective, and safe power grid.”

ERCOT is the only grid in the continental United States disconnected from either the Eastern or Western Interconnection.

More than 26 million Texas customers, or nearly 90% of the state’s population, depend on ERCOT for electricity, according to the Texas Comptroller’s office.

A survey conducted by the University of Houston Hobby School of Public Affairs in March found that 69% of people in the state lost power at some point during Feb. 14-20, and almost half saw water service affected.

ERCOT will barely exceed the minimum expected operating reserve this winter, according to a report from the North America Electric Reliability Corp. Texas’ power grid is estimated to be depleted to negative 37.1% of its reserve margin in an extreme weather event. That is the worst of all grids by a wide margin. The second worst figure is negative 2.1% for Canada’s Maritime provinces.

“Assuming that the ERCOT Region experiences typical winter grid conditions, ERCOT anticipates that there will be sufficient installed generating capacity available to serve the system-wide forecasted peak demand for the upcoming winter season,” the grid operator said in a recent report.

The February disaster could have been even worse.

Joshua Rhodes, University of Texas at Austin professor of energy resources, said the blackouts were the “last line of defense” against a complete loss of the grid.

“Texas manufacturing would likely have come to a halt,” he said, “and its ripple effects would’ve affected the state’s GDP in a major way.”

Supply chains, which already were in turmoil because of the COVID-19 pandemic, suffered more disruption due to the deep freeze, according to a recent report from the Texas comptroller. Texas chemical plants, which make up nearly 75% of U.S. chemical production, suffered equipment damage, further slowing supply lines.

In a recent report detailing the outcome of ratings watches, Fitch Ratings saw more uncertainty ahead for Texas utilities.

“Operating risks within the ERCOT market remain pronounced and could pressure credit quality further,” Fitch said. “Many details related to the legislative response to the storm are yet to be determined by the Public Utility Commission of Texas and the Railroad Commission of Texas, despite directives to change ERCOT governance, require weatherization upgrades and increase reporting requirements.

“Broad sweeping overhauls of the Texas electricity market are not anticipated at this time,” Fitch analysts added. “We expect the outlook to remain negative for most, if not all, issuers subject to ERCOT market rules until measures are implemented and/or risk mitigation strategies provide sufficient protection against recurrence of a financial event of this magnitude.”

Fitch placed 19 issuers in Texas on its rating watch negative list after the February storm.

In resolving the watch list, Fitch downgraded seven utilities and affirmed the ratings of 11. One rating was withdrawn for lack of information and the rating of one issuer was downgraded and remains on the negative outlook.

Utilities across the state must submit a report detailing their improvements for the coming winter to the Public Utilities Commission and ERCOT by Wednesday.

One of the nation’s largest public utilities, CPS Energy of San Antonio, has been coping with massive costs and litigation related to the storm. But CPS officials say they are prepared to face the coming winter.

CPS estimates that costs accumulated in the week of the freeze exceeded $1 billion. That would equate to CPS Energy’s annual fuel costs for a typical year, according to Moody’s.

“In the event CPS Energy needs to absorb financial costs on the outer range of its current estimates, it could be required to potentially issue up to $1 billion of additional debt, while creating a regulatory asset which would enable it to recover costs from customers over an extended period of time,” Moody’s said.