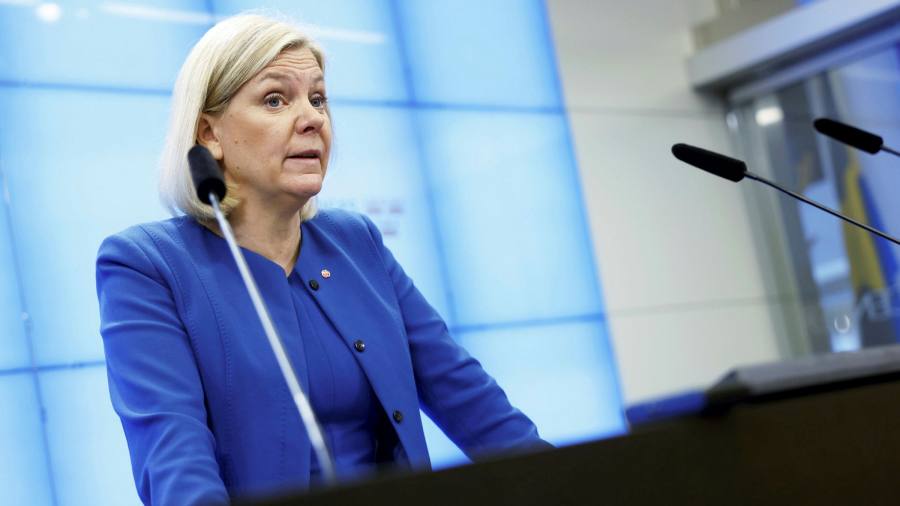 After the most remarkable and chaotic day in modern Swedish political history, Magdalena Andersson — prime minister for just seven hours on Wednesday before resigning — could agree on one thing with her opponents: the country’s politics is a mess.

Within one day all the tensions brewing over the past decade as a result of the rapid rise of the nationalist Sweden Democrats erupted, underlining the difficulties of forming a stable government in the Scandinavian country’s fragmented political system.

First, at 10am, Andersson, leader of the centre-left Social Democrats, was confirmed as prime minister despite losing a vote on her appointment as the opposition could not muster a majority to stop her taking office.

By 4pm she was deep in trouble as her own spending plans — drafted when she was finance minister in the previous coalition — were rejected. Instead the budget drafted by the opposition, anti-immigration Sweden Democrats and two mainstream centre-right parties was adopted. It was the first time that a budget drafted in part by a party dubbed far-right by most in Swedish politics had been passed.

An hour and a half later, Andersson’s government collapsed as the junior party, the Greens, quit the coalition, forcing the prime minister to resign herself.

“Many people are wondering what the hell is happening in Swedish politics right now,” said Ebba Busch, leader of the centre-right Christian Democrats. Ulf Kristersson, leader of her ally the Moderates and a possible future prime minister, added: “This political circus is very bad for Sweden.”

Out of all the chaos, Andersson has a chance at redemption. The same parties that backed her as prime minister on Wednesday indicated that they still support her. This means that she is likely to be reconfirmed in the coming days as prime minister, leading a one-party minority government.

Andreas Norlen, speaker of the parliament, said he would nominate Andersson as prime minister again on Monday, but in an angry outburst on Thursday criticised the Greens, saying he “deeply regretted” the previous day’s events.

Some political experts believe the upheaval could strengthen her party’s position. “A solo Social Democratic government could come out better from this chaos we’re in. It’s easier for them to govern on their own than with the Greens,” said Jenny Madestam, senior lecturer in politics at Sodertorn University.

All parties are now looking to national elections next September, which analysts cite as a reason for Wednesday’s chaos as several groups aim to raise their profile. But it is far from certain that new elections will solve Sweden’s fundamental problem: a fragmented political system in which forming a stable government has become a struggle.

“The big issue is the parliamentary situation, the weakness we have seen over the past 10 years. As far as most can tell that will be the same after the next election. It makes it difficult to raise the big important policy measures,” said Andreas Wallstrom, head of forecasting at lender Swedbank.

Swedish businesses have been dismayed at the inability of the government to tackle energy problems, infrastructure, housing and the integration of immigrants. “This government has, as far as I can see, achieved very little in policy terms in its seven-plus years,” said one senior executive this month.

The political winds appear to favour the opposition rightwing, and particularly the nationalists. “The Sweden Democrats’ biggest victory since our founding is a fact,” said Mathias Karlsson, the party’s chief ideologue, as he posted pictures of him and the party leader drinking champagne yesterday.

Not only has their budget been adopted, but their main issues — soaring gang crime including shootings and bombings, as well as immigration — are voter priorities. The Sweden Democrats also appear close to their goal of creating a conservative bloc with the Moderates and Christian Democrats.

“The winners from Wednesday are the Sweden Democrats. The right side have a clear government alternative. The issues are all rightwing currently,” said Madestam.

Andersson has problems in cobbling together a viable government coalition. Her support parties range from the ex-communist Left to the nominally centre-right Centre as well as the Greens. The latter two descended into mutual recriminations over Wednesday’s chaos, while the Centre refuses to allow the Left any influence.

Stefan Lofven, Andersson’s predecessor and the caretaker prime minister, managed to paper over the differences for seven years, but ahead of elections Centre, Left, and the Greens all want to increase their support.

However, Madestam thinks the biggest parties — the Social Democrats, Moderates and Sweden Democrats — stand to benefit most. “The voters are seeing what happens when we have an unclear situation. They will think twice when they choose their party in the next election and think how can Sweden have a stable government,” she added.

Until then, Andersson may well get the chance to begin again as prime minister but with little possibility of enacting big reforms.

Wallstrom said he and many economists were frustrated by the lack of investment despite growing integration and crime problems. Sweden’s public finances are strong, with debt-to-GDP levels already back to pre-pandemic levels at about 35 per cent.

He added: “We see the political price of the weak economic policies of the past few years. The extremist parties [the Left and Sweden Democrats] are gaining votes. The ways to hold those extremes away from power would be to improve the economic situation for the many people, and we could afford to both cut taxes and increase welfare expenditure.”