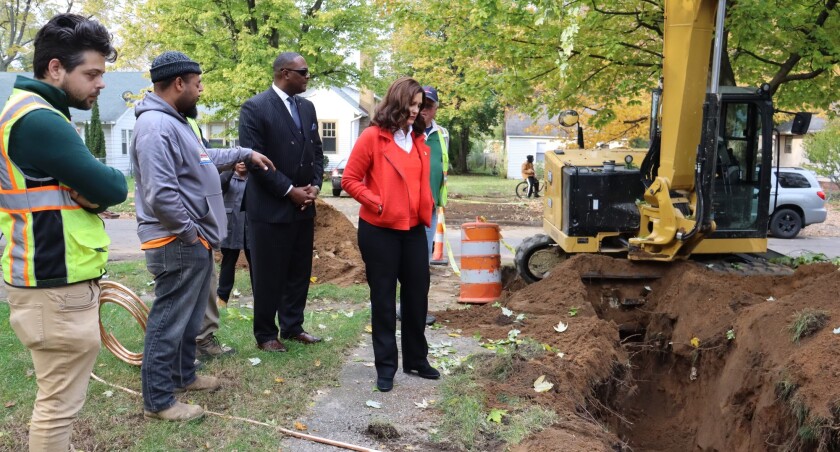 Michigan is set to receive about $10 billion over five years from the package signed by President Biden, with additional allocations possible through competitive grants. The executive orders signed by Whitmer deal with road and bridge funding and the replacement of lead lines.

Both are trouble spots for the state, which has bolstered funding through programs dubbed Michigan Clean Water and Rebuilding Michigan, but officials have warned more funds are needed and the infrastructure package will bolster both.

The state is in line to receive $1.3 billion under the traditional state revolving fund formula to improve water infrastructure, including lead service line replacement.

Michigan can expect $7.3 billion for federal-aid highway apportioned programs and $563 million for bridge replacement and repairs over five years and $110 million to expand an electric vehicle charging network and can apply for a share of $2.5 billion in EV-related grants. The state can also compete for allocations under a $12.5 billion bridge investment program for economically significant bridges and nearly $16 billion of national funding for major projects.

On Monday, Whitmer signed an executive order laying out a series of directives for state departments and agencies to work in collaboration with lawmakers in an effort to speed up the timelines for lead pipe replacement and other water improvements.

“With this executive directive, we are accelerating the timeline to replace 100% of lead service lines in Michigan, prioritizing communities that have been disproportionately impacted, fostering enhanced collaboration across departments, and ensuring that the projects are built by Michigan workers and businesses,” Whitmer said in a statement.

Agencies are directed to prioritize lead service line replacement for communities that have been disproportionately burdened by lead in their drinking water and communities that require financial or technical assistance to utilize water infrastructure dollars, to examine how to control costs, and to prioritize the use of state-based businesses.

Under Michigan’s Lead and Copper Rule which is considered one of the strictest nationwide, every community is required to replace 5% of its lead service lines every year, which would result in full compliance in 20 years across the state. However, any community experiencing an action level exceedance, or ALE, of lead levels is required to replace their LSLs at a rate of 7% per year, meaning 100% completion in just under 15 years.

“With additional federal funding from the bipartisan infrastructure plan, Michigan will be able to speed up this timeline and fix and replace more water infrastructure, including lead pipes,” the governor said.

Flint’s 2014-2015 water contamination crisis put the state at the epicenter of the national spotlight on safe drinking water and lead contamination, which is especially damaging to the developing brains of children.

In Flint’s case, the poisoning occurred when the city failed to properly treat river water, leading to corrosion in the pipes. While under state emergency management, the city had cancelled its contract with Detroit to receive Lake Huron treated water and instead use Flint River water as it awaited completion of a pipeline.

Flint returned to Lake Huron water and the replacement of most lines are expected to be completed this year. A judge recently signed off on a $600 million state settlement of claims that the administration of former Gov. Rick Snyder failed to take action to avert and then deal with the crisis. Criminal charges are pending against Snyder, the city’s former emergency managers, and others. All are fighting the charges.

More recently, high lead levels in Benton Harbor, a mostly African American city along Lake Michigan’s shore, have renewed scrutiny of the dangers of high lead levels. The state, under pressure from residents and environmental groups and activists, has stepped up action after persistent high lead levels forced residents to use bottled water.

The state committed to fully replace Benton Harbor’s lines in 18 months. The $30 million cost is being covered by $18.6 million in state and federal funds with $11.4 million still needed. Whitmer this week called on state lawmakers to agree to use remaining dollars from the state’s share of the American Rescue Plan Act.

The order signed by Whitmer Tuesday directs state agencies to take a series of actions and work in tandem on a series of goals related to putting the federal funds in action for road and bridge work.

“With this executive directive, we are getting ready to build up local roads and bridges across Michigan, create thousands of good-paying jobs for Michiganders, and ensure small businesses, downtowns, and neighborhoods have high-quality, reliable infrastructure to rely on as we usher in a new era of prosperity for our state,” Whitmer said.

The executive order lays out directives on planning, including the prioritization of in-state businesses and workers, using the funds to complement work already underway under the $3.5 billion Rebuilding Michigan package, prioritizing projects that make roads and bridges more resilient against flooding, and pursuing opportunities to expedite the deployment of electric vehicle infrastructure when rebuilding and restoring roads and bridges.