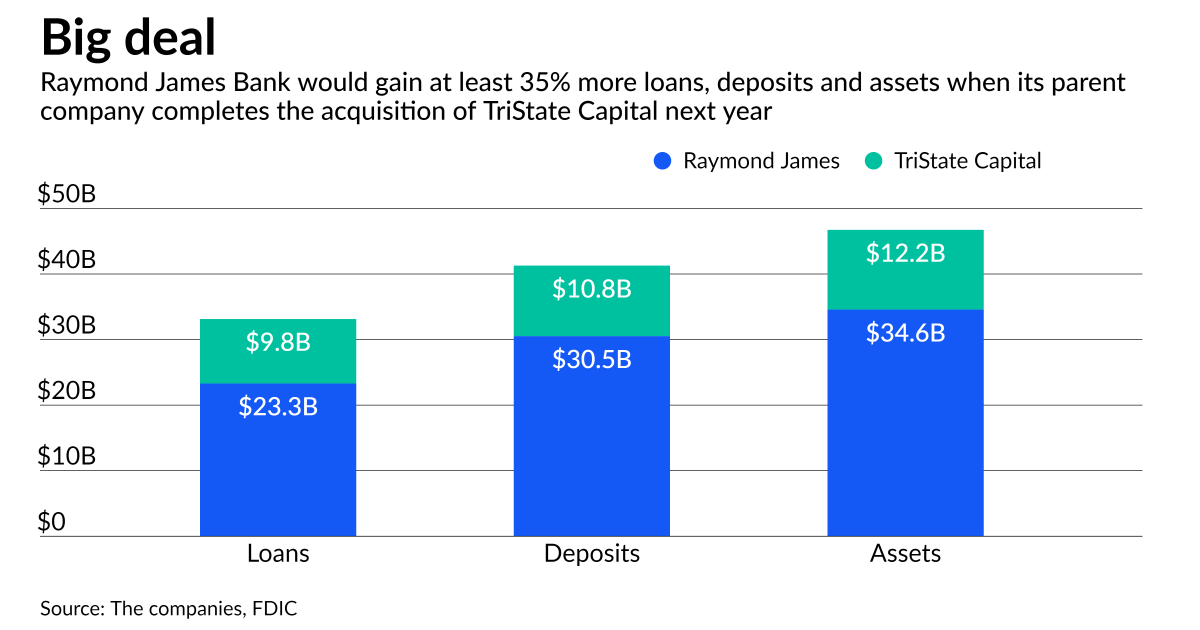 With its $1.1 billion cash-and-stock acquisition of TriState Capital Holdings, Raymond James Financial could deploy its bank’s relatively low-cost deposits into more high-yielding loans, fueling growth at a time when interest rates remain stubbornly low and profits from lending have narrowed.

Raymond James Chairman and CEO Paul Reilly said the $12.2 billion-asset TriState, a Pittsburgh-based company that caters to middle-market businesses and wealthy individuals, is on a fast-growth trajectory but needs lower cost deposits to maximize profits. The cost of funds at St. Petersburg, Florida-based Raymond James — the parent of the $35 billion-asset Raymond James Bank — was about eight basis points in the third quarter, significantly lower than the 41 basis points TriState is paying on its deposits.

“They need deposits,” Reilly said Thursday during a call to discuss the deal. “We have excess deposits” that have been difficult to deploy “at a good cost. So not only do they get low-cost deposits, but we’re going to earn a lot higher spread on that cash than we would on our own.”

Raymond James is primarily an asset management firm and its deal for TriState, announced after the markets closed Wednesday, would be its first whole-bank acquisition.

It is also the latest in a string of merger agreements struck among banks of all sizes in recent months. Persistently low interest rates, a need to curb costs and broad pursuit of scale are key factors driving merger-and-acquisition activity across the banking industry. As of Oct. 15 there were 166 bank deals announced this year, up from 111 for all of 2020, according to the most recent S&P Global tally.

TriState has about $10.8 billion of deposits and nearly $10 billion of loans. It focuses largely on private banking securities-based lending — making loans using securities as collateral. Its SBL balances have increased at a 32% compound annual rate since 2017, and are up 39% over the last 12 months to $6.2 billion.

Once the deal is completed in 2022, SBL loans would account for 33% of the combined bank’s total portfolio. That would be up from 21% at Raymond James Bank now.

The deal is “really about tomorrow and taking this company to a much higher pace and leveraging off” Raymond James’s “very strong balance sheet,” said James Getz, TriState’s chairman, president and CEO.

Raymond James expects the transaction to be accretive to diluted earnings per share in the first full year after closing. The accretion is expected primarily from cost savings. Raymond James said expenses will fall as it replaces TriState Capital Bank’s higher-cost deposits with its own.

German inflation of 6% adds to pressure on ECB
Jamie Dimon/CCP: party on, dude
At least 52 dead, including 6 rescuers, in methane explosion at Russian coal mine
How to Sell Put Options to Benefit in Any Market
WHO calls for balanced response to new virus variant