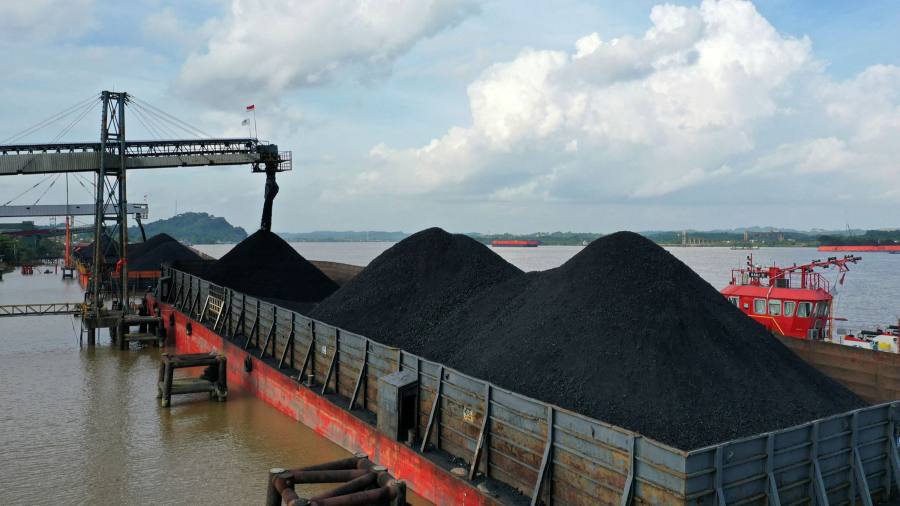 The country’s coal benchmark price has soared to $150 per tonne, up from about $90 per tonne at the beginning of June, bolstering its mining groups as China ramped up coal purchases to relieve an energy crisis that has forced it to resort to power rationing.

South-east Asia’s biggest economy is now China’s biggest overseas supplier of coal, with imports hitting a record of more than 21m tonnes in September, up from 17m in August. China, which banned Australian coal last year, agreed to buy $1.5bn of thermal coal from Indonesia in 2021.

The coal boom has come as Indonesia’s broader economy has defied predictions of a sustained slowdown that has gripped its neighbours.

The country has returned to pre-pandemic growth despite a devastating outbreak of the Delta coronavirus variant over the summer, while the rupiah is south-east Asia’s best-performing currency since the beginning of September. Inflationary pressures are also the least pressing in the region, according to analysts.

Indonesia has escaped an economic rut and is now in a “sweet spot”, said Trinh Nguyen, a senior economist at Natixis. Unlike most of the region, its commodity exports are higher than its manufacturing exports, meaning it benefits during a commodity supply shortage.

“China slows but still grows. Energy demand is going to continue and that will help Indonesia,” she said, referring to China’s slowing economic momentum.

The energy crunch has pushed up the stock prices of Indonesia’s coal companies and put many back on track to book a profit after suffering net losses last year.

Shares in Bumi Resources, the country’s biggest producer, have jumped almost 40 per cent since the beginning of September, while those of Adaro Energy and Indika Energy have risen 31 and about 50 per cent, respectively.

But heavy rainfall has hindered local companies’ ability to boost production. Bumi, which counts China as its biggest importer, said the weather “has been the key constraining factor in increasing output this year”.

The company said it would maintain its production target of 83m to 87m tonnes for 2021, up from 81m tonnes last year.

Steel companies have also enjoyed increased Chinese demand. Gunung Raja Paksi, Indonesia’s biggest privately owned steel company, said 90 per cent of its production went to the domestic market, but that number was expected to drop to 50 per cent over the next few years.

Kelvin Fu, a director of Gunung Capital, a family office founded by the steelmaker, confirmed that it had ramped up exports. “Chinese-forced production cuts are being filled by [south-east Asian] steel mills, especially in Indonesia,” he said, adding that power and production cuts in China would get worse as winter sets in.

The external demand for commodities has fed into other indicators in Indonesia, analysts said, as the economy accelerated out of a Covid-19 downturn. The country of 274m people has gone from reporting 50,000 coronavirus cases a day in July to less than 1,000.

“Core inflation is muted and there is no currency crisis so the central bank is not in a rush to hike rates — unlike a lot of other regional banks,” said Priyanka Kishore, an Asia economist at Oxford Economics.

Mansoor Mohi-uddin, chief economist at the Bank of Singapore, said that while the rupiah had performed well over the past few months, the US Federal Reserve’s expected tapering of its pandemic stimulus as early as next month would put pressure on emerging market currencies.

“As the Fed starts tapering its quantitative easing, the Indonesian rupiah and other emerging market currencies may start to soften again,” he said.

Others cautioned that China’s thirst for coal, and Indonesia’s attendant commodities boom, would be temporary.

Shahim Zubair, a Singapore-based director for rating group Fitch said he did not expect to see investment to increase production on a larger scale: “Most industry players don’t think [Chinese-driven price increases] will be a long-term thing.”

Nor does the boost for coal fit Indonesia’s green ambitions for its economy, or a broader regional shift away from coal. Jakarta has set a goal of reaching net zero emissions by 2060.

“Temporary increases in coal demand do not alter the longer-term trend of an energy transition where the share of coal power in Asia’s power mix will decline over the next decade,” said Maisam Hasnain, a vice-president and senior analyst at Moody’s.