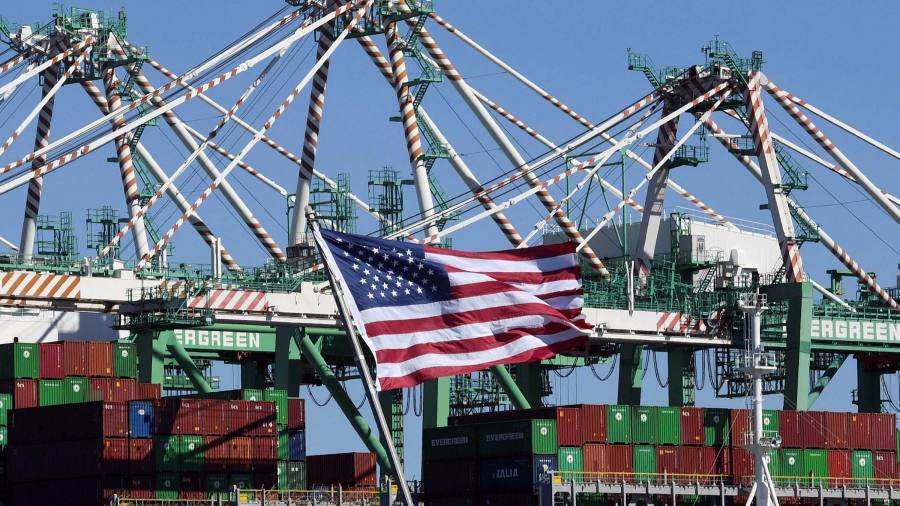 Joe Biden has secured pledges from Walmart, UPS and FedEx to extend their working hours in a bid to ease supply chain bottlenecks that are weighing down the US and global economic recoveries.

The three companies on Wednesday committed to move towards a round-the-clock, seven-day-week model as part of a broader effort to help clear the mismatches between booming demand and lagging supply and alleviate shortages.

The moves from corporate America were unveiled at White House summit hosted by Biden, who met with business leaders, port and freight executives and union officials to discuss the strained state of global supply chains.

“I know you’re hearing a lot about something called supply chains and how hard it is to get a range of things from a toaster, to sneakers, to a bicycle, to bedroom furniture,” Biden said after the event. “Today’s announcement has the potential to be a game-changer.”

Senior Biden administration officials noted that UPS and FedEx combined shipped 40 per cent of American packages by volume in 2020 and their move would spur others to do the same. They also singled out Target, Home Depot and Samsung for taking steps to move more containers out of the ports.

The Biden administration has been pushing rail freight companies, trucking groups and ports to increase their own capacity to meet rising demand. Many have struggled to find enough staff, however, and the scarcity of warehouse space near the ports has exacerbated the bottlenecks.

One senior administration official said the Port of Long Beach in California had taken steps towards operating on a 24/7 schedule about three weeks ago, while the neighbouring Port of Los Angeles had decided to match that, with the critical backing of the International Longshore and Warehouse Union.

“It is up to the terminal operators to actually open up those hours and book the cargo movements in the off hours, so labour has pledged that they will be there. We know that they’re committed to doing this,” the official said.

The move by the White House to more aggressively push corporate America to boost hours and capacity comes amid growing concern that the economic recovery will be stymied by an extended period of supply chain bottlenecks that could also contribute to rising inflationary pressures.

In an interview with CBS on Tuesday, Janet Yellen, the US Treasury secretary, said supply chains were “very stressed”, noting that “close to 100 ships” were docked outside the ports of Los Angeles and Long Beach “waiting to unload goods”. But she was also confident that the problems would be resolved.

“There may be isolated shortages of goods and services in the coming months. But there is an ample supply of goods. And I think there’s no reason for consumers to panic about the absence of goods that they’re gonna want to acquire at Christmas,” Yellen said.

Some analysts cautioned that the measures announced on Wednesday would not be sufficient. Brian Whitlock, a Gartner research analyst specialising in logistics, said it would be too little, too late to ease retailers’ holiday season concerns.

“What’s sitting in the ports today is taking 60 days to get out, so Christmas is gone,” he said. “For sure, every little bit helps but this is a drop in the ocean in terms of what needs to be done.”

“You have these highly efficient ports sending these big ships in waves because of these Covid lockdowns,” he said. “They’re unloading these huge ships . . . to ports that are one-third as efficient. At the end of the day they have to do a better job of getting containers out of the ports.”

According to a fact sheet distributed by the White House, Walmart is specifically pledging to increase its use of night-time hours “significantly”, raising its “throughput” — or capacity — by “as much as 50 per cent over the next several weeks”.

UPS has vowed to move ahead with round-the-clock operations and more data sharing with ports. FedEx said it would make changes allowing it to double the volume of cargo moving out of ports at night.

Biden’s focus on supply chains has intensified over the year, as it has become a source of weakness for an otherwise strong, stimulus-fuelled US economic recovery, and also a potential point of political vulnerability for Democrats ahead of the midterm elections next year.

In June, the president created a task force to deal with supply chain troubles in areas ranging from semiconductors to rare earths and pharmaceutical ingredients. But the supply chain crunch has now broadened out to other more basic consumer goods, leading to additional pressure on corporate America to help clear the backlogs.