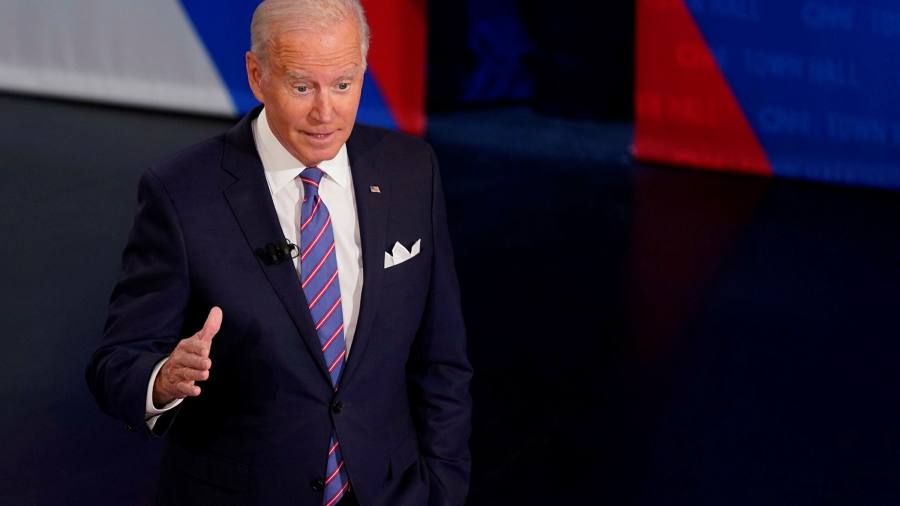 Joe Biden vowed to defend Taiwan from Chinese military action, in comments that contradicted US policy to maintain an ambiguous stance over whether it would come to its rescue.

Asked whether the US military would defend the country in the event of a Chinese attack, the president said: “Yes, we have a commitment to do that.”

Biden made the comments during a wide-ranging CNN town hall event that covered pivotal tax-and-spending negotiations on Capitol Hill and rising prices, including for energy.

Biden’s comments on Taiwan appeared to upend a decades-long policy of “strategic ambiguity”, under which Washington has refused to say whether it would defend it from a Chinese attack. The policy is designed to discourage Taipei from declaring independence and to give Beijing pause about taking military action to seize the country, which it views as Chinese territory.

The White House sought to play down the comments, saying Biden was “not announcing” a change. “We will uphold our commitment under the act, we will continue to support Taiwan’s self-defence and we will continue to oppose any unilateral changes to the status quo,” it said.

But Biden’s remarks were much more explicit than similar comments he made last month, which US officials were also forced to clarify.

Under the Taiwan Relations Act, which was passed when Washington normalised relations with Beijing in 1979, the US provides Taiwan with support to defend itself. This has generally focused on arms sales and the law does not bind the two countries in a formal defence alliance.

Biden’s remarks came amid mounting tensions between the US and China. The countries have seen some improvement in diplomatic relations in recent weeks but relations remain under pressure over Taiwan, as the Chinese military continues its assertive activity near the island.

The US has also become alarmed by the pace of China’s military modernisation after the Financial Times revealed that Beijing tested two hypersonic weapons in the summer. Asked this week if he was worried about the Chinese hypersonic weapons, Biden said: “Yes.”

Some experts have called for Washington to switch to a policy of “strategic clarity” over Taiwan, arguing that it would send a stronger signal to China.

But many senior officials in the Biden administration have privately argued that a shift might embolden President Xi Jinping to take action sooner, believing “strategic ambiguity” has helped keep the peace between the two adversaries.

Kurt Campbell, the top White House Asia official, said in May that a shift would entail big disadvantages. “There are some significant downsides to . . . strategic clarity,” he said.

China hit back at Biden’s comments. Wang Wenbin, a spokesperson for the foreign ministry, said Taiwan was “an inalienable part of China” and urged Washington to be “cautious in its words and deeds”.

Kolas Yotaka, a spokesperson for Tsai Ing-wen, Taiwan’s president, said the Biden administration had been “clear and consistent about its rock-solid support for Taiwan”.

The CNN event came at a crucial moment for the US president after a sharp drop in his approval ratings and on the eve of his departure for the G20 summit in Italy and the COP26 climate conference in the UK.

White House officials are immersed in talks with some Democrats to see if they can secure a spending package worth up to $2tn in investments in childcare, paid leave, education and measures to fight climate change. But the size of the bill has already been driven down from $3.5tn by resistance from moderate Democrats.

Crucially, Biden conceded that he might fail to enact corporate tax rate increases to fund his flagship spending plans, a big defeat after he had put a reversal of Donald Trump’s 2017 tax cuts on large businesses at the heart of his fiscal agenda.

“I don’t think we are doing to be able to get the vote,” Biden said, when asked about the tax increases.

The opposition was driven by resistance from Arizona’s Kyrsten Sinema, whose support is essential to any deal and who is also averse to individual tax rate increases in the package.

But people familiar with the talks say other potential tax increases, both on corporations and the wealthiest Americans, remain on the table, so paying for the spending without adding to US deficits should not be in question. Among the alternative options being discussed are a surtax on share buybacks and a wealth tax on billionaires.

Additional reporting by Tom Mitchell in Singapore, Edward White in Seoul and Xinning Liu in Beijing

U.S. Poverty Rate By City In 2021
Online content streaming is dead. Long live the music NFTs
Elon Musk Calls Binance’s Dogecoin Problem ‘Shady’ — Says He’s Raising the Issue on Behalf of Other DOGE Holders
Mineral exploration expenditure in Australia up 32% in September quarter 2021 y-o-y – report
The Government Created Inflation…and Has No Idea How to Fix It