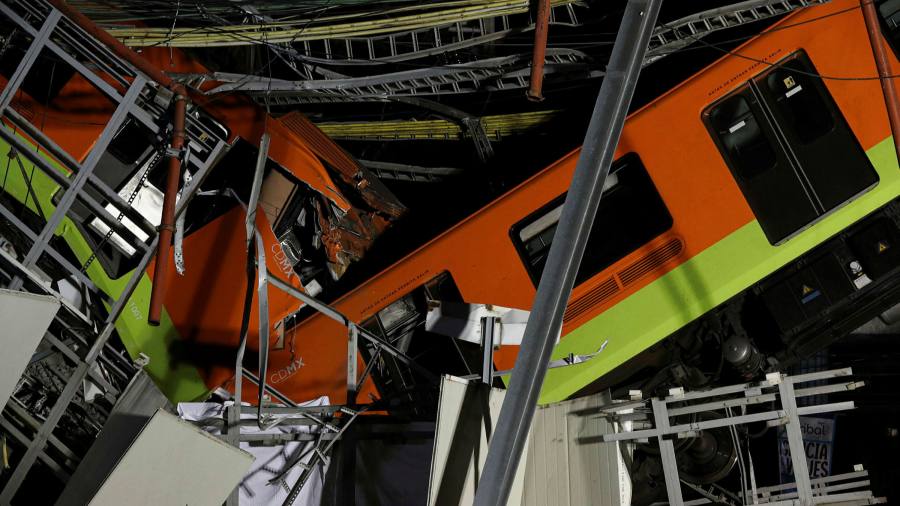 At least 20 people died and 70 were injured when an elevated section of the Mexico City metro collapsed on to a road below, leaving the train split in two and hanging precariously.

The accident, which happened late on Monday, came after reports that a car had crashed into a pillar supporting the rail bridge. Mayor Claudia Sheinbaum, addressing reporters at the scene in a hard hat, said a support beam had given way.

Videos shared on social media captured the moment when the line collapsed, crashing on to a busy road below. Sheinbaum said at least one car was trapped under the train.

Rescue workers were at the scene, searching for survivors or trapped passengers. Forty-nine people were taken to hospital.

The accident happened on Line 12, the newest metro line, in the south of the capital. The line was built when Marcelo Ebrard, now the foreign minister and considered a leading contender to succeed President Andrés Manuel López Obrador, was mayor of the city.

On Twitter, Ebrard promised his full assistance in the investigation of the “terrible tragedy”.

Line 12 was partially closed in 2014-15 to repair what the authorities described at the time as structural faults. Four stations were also shut after a major earthquake struck the capital in 2017.

One survivor told Foro TV that he felt the train “brake suddenly and we were all pulled in the other direction. My cell phone flew out of my hand . . . I saw people who had fainted and were unconscious.”

The US Brainwashes the World
Another Eight-Figure Pocket Deal: Patriots Owner Robert Kraft Snags $43 Million Hamptons Mansion
The Hamptons home on the market that evokes the beauty of Beijing’s Summer Palace gardens
Street re-elected as West Midlands mayor in fresh blow to Labour
5 Takeaways From The 2021 Berkshire Hathaway Annual Meeting