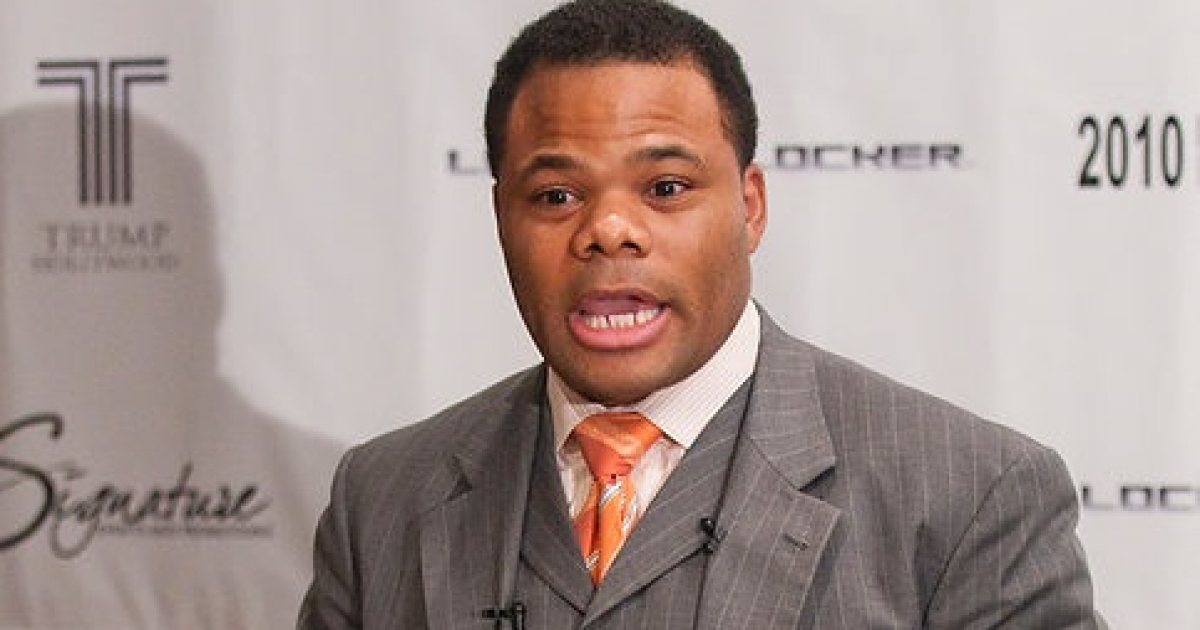 He promised his clients, many of them retirees who turned over their life savings, that they were “guaranteed” to make money with him. Instead, the Chicago-based financial advisor stole their money to bankroll a $40,000-a-month mansion in the Hollywood Hills, luxury sportscar rentals and other lavish expenses.

A federal judge handed DaRayl D. Davis a 160-month jail sentence — 13 years and four months — on Monday after he pleaded guilty to defrauding more than 25 clients out of $5.1 million. Judge Robert Gettleman of the Northern District of Illinois handed down the sentence after Davis, 48, pleaded guilty earlier this year to mail fraud in connection with the case.

Davis, whom prosecutors said “slithered” his way into his clients’ lives, framed himself as a “financial coach,” media personality and investment advisor. He held seminars on financial planning that he marketed as the “Smart Money Academy” and “The Smart Money Millionaire Experience.” In 2009, he self-published what he touted online as a best-selling book, “Economic Secrets of The New Retirement Environment.” (It ranks #6,740 on Amazon’s list of best-selling books on retirement.)

$40,000 a month to rent a mansion in Hollywood Hills
But instead of investing his clients’ money, he spent it. Purchases included rent on an eight-bedroom mansion in the Hollywood Hills (about $476,500, at $40,000 per month), airline tickets ($102,000), luxury hotels ($42,000), car rentals for a Lamborghini, Ferrari and Rolls Royce, theater tickets and other items (including $706,000 in credit card payments), his indictment in June 2018 said. He tried to conceal his scam “by using funds from some investors to make Ponzi-type payments to other investors.”

When he was indicted in 2018, he showed up on FINRA’s BrokerCheck as having worked at Investors Capital Corp., a broker-dealer and advisory firm, between 2005 and 2008. The firm was banned by the SEC in 2017 after a long string of violations. Because Davis subsequently never registered with another firm, and because BrokerCheck doesn’t show records for people who haven’t been registered within the last 10 years, his record doesn’t appear there now.

What’s evident is that his deceit lurked beneath a carefully-polished image that cultivated celebrities (though none appear to have been his clients, according to court records). His Instagram page describes him as the “CEO of Affluent Advisory Group, Founder & CEO of Smart Money Academy, Bestselling-Award-Winning Author, Executive Producer & Host.” One photo shows him with actor Will Smith; another with basketball star Magic Johnson; another with Barack Obama. His LinkedIn profile shows that he spent two years at Howard University but did not complete his degree. On his Pinterest page, he calls himself an “eradicator of financial illiteracy.” A blurb for one of his books on Amazon said he was “poised to become the next big voice on financial education and wealth mastery,” and he was quoted by The New York Times in a 2011 story on retirement.

Prosecutors argued in court papers that Davis was a “charlatan” who “targeted his victims personally, seeking out fellow church members, individuals who had previously purchased legitimate investment products from him, or ‘friends’ to whom he offered the ‘favor’ of an inside investment opportunity.”

Between at least 2003 and 2018, Davis falsely promised clients that they would receive fixed annual interest payments and “guaranteed protection against losses” if they invested with him through two firms that he owned and controlled, Financial Assurance Corp. of Washington, D.C., and Affluent Advisory Group of Los Angeles. He told clients that some of their money would be backed by Allianz, the insurer.

In fact, Davis had no affiliation with Allianz, even as he called the insurer “our primary investment partner.” He also claimed an affiliation with Nationwide Financial and told clients that he used Wells Fargo as a custodian. He used bank accounts at Chase and Bank of America, court records of cashed checks show. He did not segregate investors’ money, set up separate accounts or acquire any actual investment products.

A ‘Ponzi-like scheme’
The SEC filed a civil complaint against Davis and Affluent Advisory Group in December 2017, alleging that he was “a former securities industry professional who has held himself out to be an investment adviser and life coach” but was actually running “a Ponzi-like scheme.” The securities regulator won a default judgement against him in March 2018.

The Justice Department case unfolded after the FBI began investigating Davis in April 2017 in response to a complaint by two clients, a married couple in Chicago, court filings show. One spouse was a retired US Postal Service employee, who in 2015 invested more than $200,000 in retirement savings with Davis through an account that the advisor held at SunTrust Bank. Davis prepared fake account statements showing, falsely, that the clientssgained 30% over a 17-month period. In fact, the clients lost all but $15,000 of their savings, after Davis spent it on personal expenses, including the Bronze Buffalo Club, a members-only, Western-themed sportsmen’s club. In late 2017, Davis violated court orders that froze his assets, opening new bank accounts and taking out new credit cards to bankroll his daily expenses and incorporate a new business entity, and sending his mother to make ATM cash withdrawals with his new cards, all while lying to the SEC, FBI and federal court about it. He was indicted in June 2018.

On typed letters detailing some of his offerings, Davis wrote, “I will personally continue to serve as your trusted advisor and investment coach.”
But the investigations found that instead of investing clients’ funds, he was stealing them. One client, a retired school teacher, lost more than $652,000 in retirement savings. Another, a widower, was scheduling brain surgery at the Cleveland Clinic while trying to track down her money. “Where is my $600,000?” yet another client texted Davis frantically in 2016. One of Davis’s own lawyers at the time, according to court filings, admitted that his client had “wiped them out of all of their savings.”