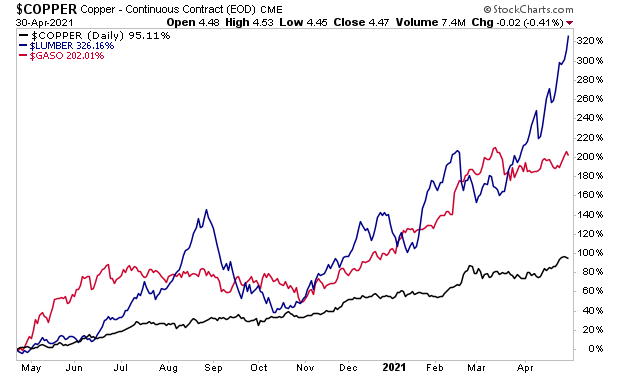 You see, inflation arrives in stages. It’s not as though it appears overnight and suddenly the cost of everything rises.

Instead, inflation slowly works its way into the financial system in phases.

The first stage occurs in the manufacturing/ production segment of the economy when you see producers suddenly paying more for the raw goods and commodities they use to manufacture/ produce finished goods.

We first hit this stage several months ago as the below chart illustrates. The price of raw materials such as copper, lumber and even gasoline are all up triple digits in the last 12 months.

Now, one or two months of higher commodities or raw goods is no big deal, but once you’re talking 6-8 months of steadily rising prices it’s significant. At that point manufacturers/ producers are forced to start raising the prices of finished goods or face shrinking profit margins.

This is when you see the next phase of price hikes, in factory gate prices.

You see, in today’s economy the company that makes something is rarely the one that sells it to the public. Instead, producers/ manufactures first sell their goods to retailers/distributors, who then sell the goods to the public.

Put another way, the last time producers were forced to charge this much was in 1980… and that was during one of the worst inflationary storms in history when the Fed was forced to raise rates to over 15%.

Retailers and distributors can stomach these prices increases for a time, but eventually they are forced to raise the prices they charge consumers or go broke.

As the Financial noted over the weekend, are now officially there:

Nestlé, Procter & Gamble and Unilever are among the global groups to have set out plans for price rises in their latest market updates following commodity price jumps and a spike in transport and packaging costs.

These are not isolated instances either as the below headlines reveal. Everyone from Coca-Cola to Costco is being forced to hike prices.

How Costco Is Masking A 14% Price Jump With Shrinkflation

That last term is key. Companies don’t always simply hike raise prices. Sometimes they engage in “shrinkflation” of the policy of selling less of a product for the same price. You’ve probably noticed when you open a food container than between 30% and 50% of the container is empty.

That’s shrinkflation: less of a good for the same price, means higher prices per unit.

Bottomline: inflation is DEPLY embedded in our financial system. Will the Fed act to stop it, or are we entering a true inflationary storm in which prices spiral out of control?

On that note, we just published a Special Investment Report concerning FIVE secret investments you can use to make inflation pay you as it rips through the financial system in the months ahead.

The report is titled Survive the Inflationary Storm. And it explains in very simply terms how to make inflation PAY YOU.

We are making just 100 copies available to the public.

To pick up yours, swing by: