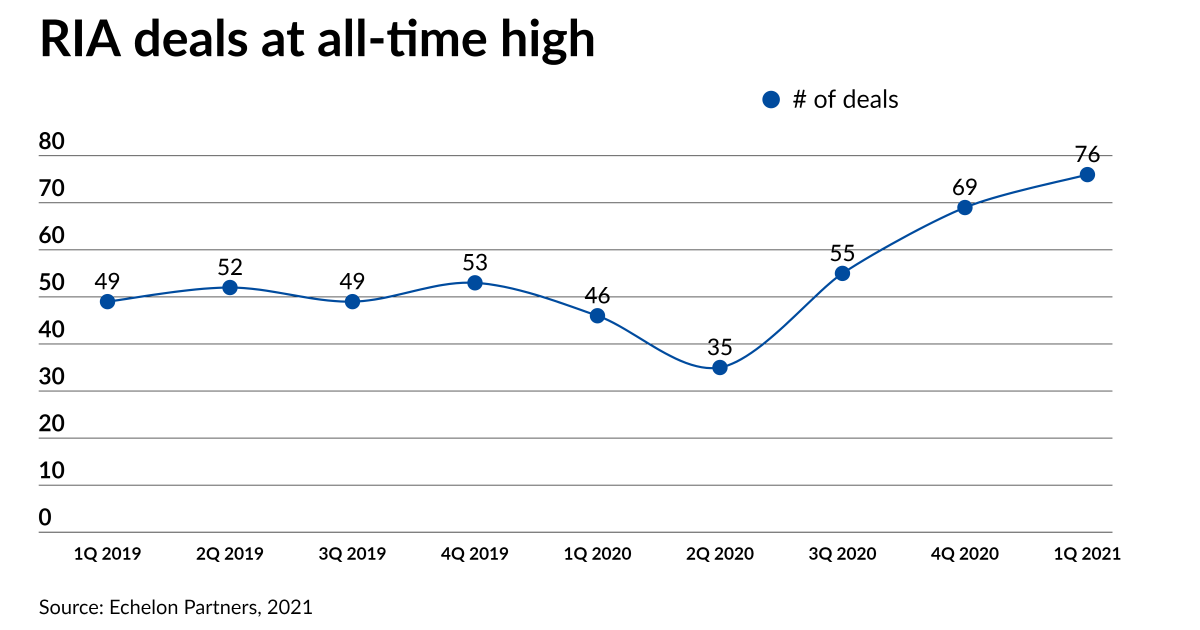 Firms backed by one of the industry’s fastest-growing RIA consolidators are scaling quickly, too.

Congress Wealth Management will nearly double its client assets as a result, to $5.8 billion, up from about $3.4 billion, according to the firm.

“It’s more rare to have similarly sized firms join up … Although it is certainly not unprecedented,” says Brian Lauzon, managing director of investment bank and M&A advisor InCap Group. InCap was not involved in this deal, but Lauzon has done consulting work with Congress Wealth Management in the past, he says.

Congress Wealth Management was seen as one of Toronto, Canada-based CI’s “keystone” investments in the U.S., according to Lauzon. CI Financial acquired a “strategic interest” in the RIA in May 2020, when Congress Wealth Management had approximately $2.3 billion in client assets, according to the firm. CI helped finance the RIA’s purchase of Domus Capital Group, which offers family office services primarily on the West Coast, earlier in 2020.

A CI Financial spokesman said that the Canadian asset manager is the largest stakeholder in Congress Wealth, although it is a minority stake.

In addition to scale, Congress Wealth’s purchase of Pinnacle may help land the firm a spot in Charles Schwab’s referral network. Pinnacle is a member on both Schwab and TD Ameritrade’s referral platforms, according to its latest ADV. Both of the firms custody at Schwab, TD and Fidelity, according to documents.

A Schwab spokesman did not return a request for immediate comment.

The deal will also boost CI Financial’s presence in the U.S. The asset manager entered the market last year and has since been on a buying spree. While the company’s pace has slowed relative to competitors like Mercer Advisors since last year, CI Financial, or the RIAs it owns, have minted five deals already in 2021, according to data by investment bank Echelon Partners — including its largest deal to-date.

In total, the Canadian asset manager has purchased a stake in 13 RIAs since 2020, all of two of which have been a majority or full purchase, according to the firm. There have been four sub-acquisitions, including Pinnacle. CI Financial is currently building out its U.S. wealth platform with executives from the firms it’s purchased, its CEO said earlier this year.

Deals are at an all-time high across wealth management — and the size of firms on the auction block are getting bigger. In the first three months of 2021, there were at least 76 deals, according to data by Echelon Partners, and the average seller managed more than $2.3 billion in client assets.

“The size of the companies is definitely creeping up,” Lauzon says.

Pinnacle is a former employer of financial advisor and wealth management blogger Michael Kitces, who occasionally contributes to Financial Planning.