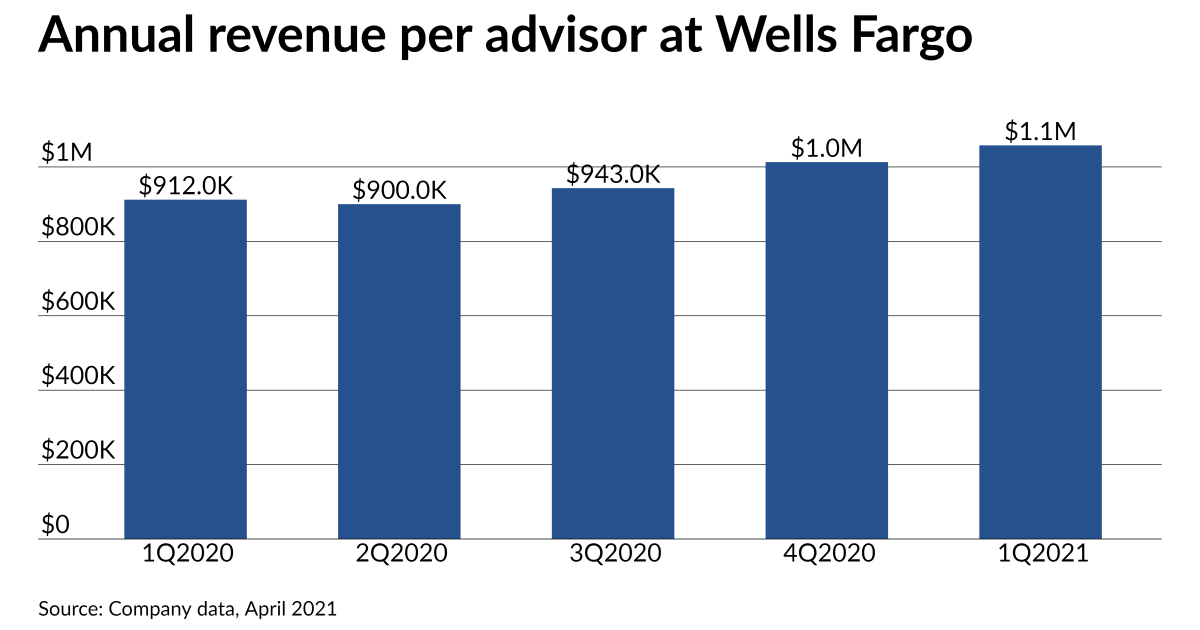 Wells Fargo’s headcount has shrunk yet again as the bank’s wealth management unit moves forward with its plans to exit the international advice business.

A net 236 advisors left either Wells Fargo Advisors or Private Bank in the three months that ended in March, the company said in its latest quarterly report. The bank now staffs 13,277 advisors — that’s 1,000-some fewer than it did this time last year.

A portion of these departures stems from Wells Fargo’s decision earlier this year to abandon services for international clients, although the company says that this represented only “a small percentage of assets under management and accounts.”

The wirehouse is exiting the international market in an effort to simplify its business, as “this segment requires different processes, approaches and infrastructure maintenance,” Wells Fargo spokeswoman Shea Leordeanu said in an email.

By the end of March, approximately 25% of the advisors who were focused on non-U.S. clients had either already left the company, or announced they planned to, she said, which was “in line” with what the company had expected, Leordeanu wrote.

Although she wouldn’t specify the number of advisors who had been affected by the wirehouse’s decision, Leordeanu noted it was “a small fraction” of the overall advisor workforce. The company had been consulting with these advisors about their options, she said.

“We understand this is a difficult change for our international-focused advisors and this business will take a number of additional months to exit,” Leordeanu said.

The matter was not addressed by executives on the company’s April 14 earnings call, although it was briefly mentioned in a note within the bank’s investor presentation deck.

A steady stream of advisors have left the company for competitors or to open up their own firms in recent years, particularly after repeated scandals. Recent departures included a $500 million advisor who left the wirehouse and opened an RIA with Dynasty and a team of six advisors that left the company in August after they said the bank failed to secure Paycheck Protection Program loans for about 50 of their clients.

The company changed the way it reported advisor headcount at the end of 2020 — now reporting wealth advisors, of Wells Fargo Private Bank, alongside brokers within its wealth management unit, according to earnings reports.

Revenue in Wells Fargo’s wealth and investment management division grew to $3.5 billion in the last quarter, up $274 million from the year ago period, according to the company. Companywide revenue was more than $18 billion this quarter, up from $17.7 billion in the year-ago period.

In October, Wells Fargo fired more than 100 staffers it suspected had improperly collected coronavirus relief funds, according to reporting by Bloomberg News.

In addition to its exit of the international advice market, Wells Fargo sold its asset management business to two private equity firms for $2.1 billion and its corporate trust services unit to an Australian financial services company for $750 million. Those two deals are expected to close in the second half of the year, according to company executives.

The wirehouse has $885 billion in advisory assets and $1.2 trillion in other brokerage assets and deposits within its wealth and investment management division.

Cronos Group 1Q Profit And Revenue Miss Estimates; Shares Up 4%
Get Ready For The Most Painful Inflation Since The Jimmy Carter Years Of The 1970s
Stocks making the biggest moves after the bell: Activision Blizzard, T-Mobile, Lyft and more
Cameco Posts Better-Than-Expected Results In 1Q; Shares Soar 8%
Dell To Sell Boomi For $4B To Francisco Partners And TPG Capital