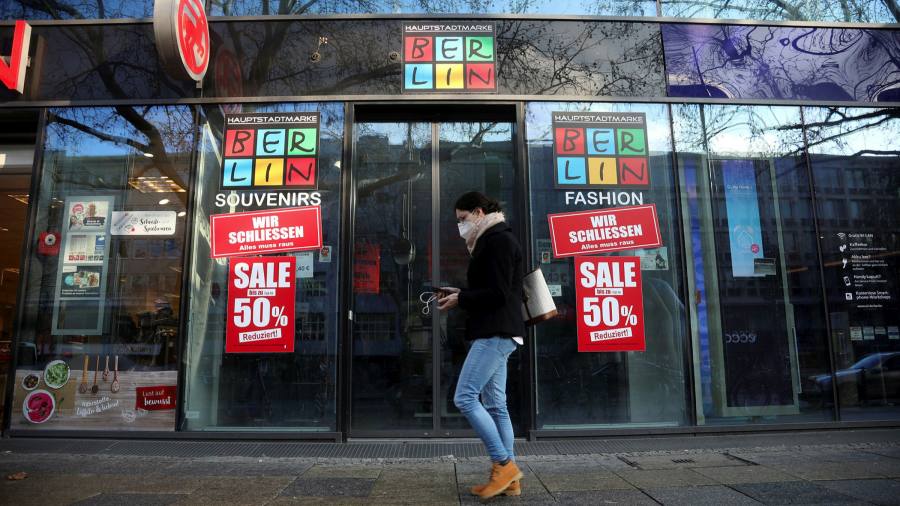 US stocks pulled back from record highs as investors weighed a mixed economic picture of strong recovery in the US, a technical recession in the eurozone and slowing growth in China.

The blue-chip S&P 500 index, which crossed 4,200 to close out Thursday at an all-time high, dropped 0.5 per cent in early New York trades. The technology-focused Nasdaq Composite fell 0.6 per cent.

The eurozone economy contracted 1.8 per cent in the first three months of the year, compared with the first quarter to 2020, data released on Friday showed. Economists surveyed by Reuters had forecast a deeper 2 per cent decline, but the pandemic-scarred eurozone economy has now recorded two consecutive quarters of contraction, technically entering a recession.

China’s manufacturing activity gained momentum in April, according to a purchasing managers’ index released by Caixin and IHS Markit on Friday. But while the index bounced back from an 11-month low in March, the reading of 51.9 for April was well below levels recorded for much of last year.

Brent crude futures dropped 1.8 per cent to $67.31 a barrel following the China and eurozone data. The moves came a day after the US reported a 6.4 per cent annualised rise in GDP for the first quarter, beating analysts’ expectations for a 6.1 per cent increase.

“The market has a lot of conflicting newsflow to contend with,” said Georgina Taylor, multi-asset fund manager at Invesco.

“The bar is now high for what will provide continued momentum in equities . . . We’ve had a big advance on the back of the US recovery and strong earnings from market leaders,” she added, after a host of US companies including large technology and oil groups reported surging profits.

Jonathan Golub, chief US equity strategist at Credit Suisse, said businesses’ recovery from the pandemic was unlikely to have peaked, arguing that analysts looking ahead to the second quarter were probably not optimistic enough.

“In the early stages of an economic cycle, analysts tend to underestimate operating leverage,” he said, referring to the profit-magnifying effects of sales growing while businesses’ cost bases remain stable. Misreading this effect often leads to analysts needing to revise up earnings forecasts in “a trend that can last two to three years”, he added.

European stocks looked set to end the week flat, with the regional Stoxx 600 index adding 0.1 per cent to 439 points, barely moving from this time last week.

In debt markets, the benchmark US Treasury bond yield was steady at just under 1.64 per cent. The yield, which moves inversely to the price of the debt, has climbed from about 0.9 per cent at the start of the year as a brightening outlook for the US economy sparked bets on of a jolt of inflation, which erodes the returns from fixed interest securities such as bonds.

Germany’s benchmark Bund yield fell by 0.02 percentage point to minus 0.21 per cent but remained around its highest since early March. German consumer prices rose 2.1 per cent in April compared with the same month last year, data released on Thursday showed, pushing slightly above the European Central Bank’s target for the eurozone.

The ECB, however, has echoed the view of the US Federal Reserve that any sharp increases in inflation this year will prove transient, caused by factors such as a recovery in oil prices after they collapsed during the pandemic last spring.