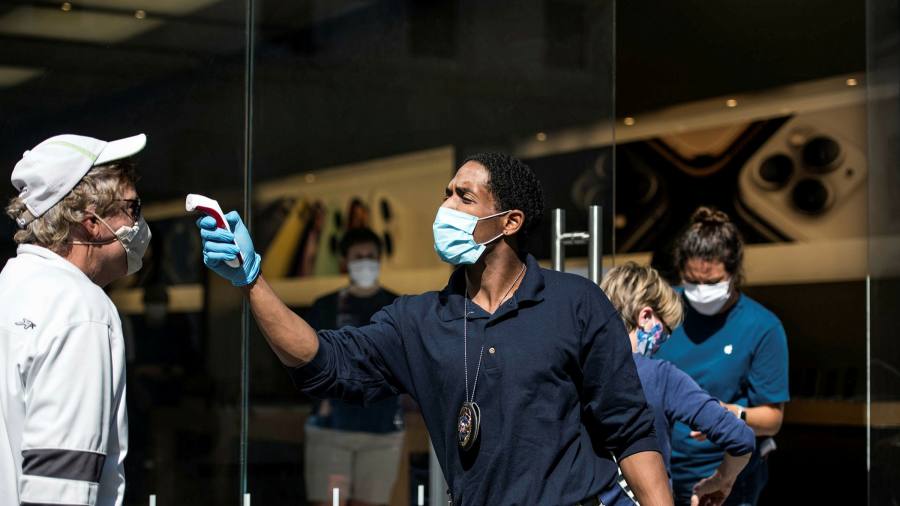 South Carolina’s Republican governor has been sued over his mandate to “immediately expedite” a return to in-person work for state employees, in a move that underscores sharp divides in the US over how to resume normal activities during the Covid-19 pandemic.

The American Civil Liberties Union of South Carolina filed the lawsuit on Tuesday against Henry McMaster, South Carolina’s governor, in response to an executive order he issued last month directing state agencies to “immediately expedite the transition back to normal operations” by submitting plans to bringing public workers back into the office full-time.

The same order also lifted requirements for face masks to be worn in state-owned buildings and in restaurants.

The ACLU, a non-profit, said it was challenging the order because it “exceed[ed] the governor’s authority and will disproportionately harm women, people with disabilities, caregivers and black people”.

“The governor does not have the authority to require non-essential state workers to put themselves and their families at an unnecessary health risk,” the ACLU said in a statement. “This order is dangerous, irresponsible, and completely unnecessary.”

McMaster’s office did not immediately respond to a request for comment.

Brian Symmes, a spokesperson for the governor, told The State newspaper: “The Department of Administration has done an incredible job working with agency heads to bring state employees back into the office in a safe way, providing flexibility to make accommodations when necessary and giving agencies time to implement safety precautions in the workplace.

“It’s ridiculous to think that requiring employees to go to work is discriminatory in any way,” he added.

The lawsuit highlights the discord over how Americans should resume working and leisure activities amid rising vaccinations and a decline in Covid-19 cases.

According to the US Centers for Disease Control and Prevention, 167m doses have now been administered — more than any other country. While 40 per cent of adults have received at least one shot, about a quarter have completed their course of vaccinations, including 55 per cent of people aged over 65.

The White House on Tuesday said all American adults would be eligible for a vaccine from April 19.

But federal and state policymakers remain at odds over how to resume normal activities, from in-person working to eating out to attending musical performances and sporting events.

Many state governors have pressed ahead with reopening plans even as the federal government urges a more cautious approach. Republicans have been the loudest voices calling for a return to normalcy, but many Democratic leaders are also laying out plans to relax regulations.

Gavin Newsom, the Democratic governor of California, on Tuesday said he was aiming to fully reopen the state’s economy by June 15.

“With more than 20m vaccines administered across the state, it is time to turn the page on our tier system and begin looking to fully reopen California’s economy,” he said.

“We can now begin planning for our lives post-pandemic,” he added. “We will need to remain vigilant, and continue the practices that got us here — wearing masks and getting vaccinated — but the light at the end of this tunnel has never been brighter.”