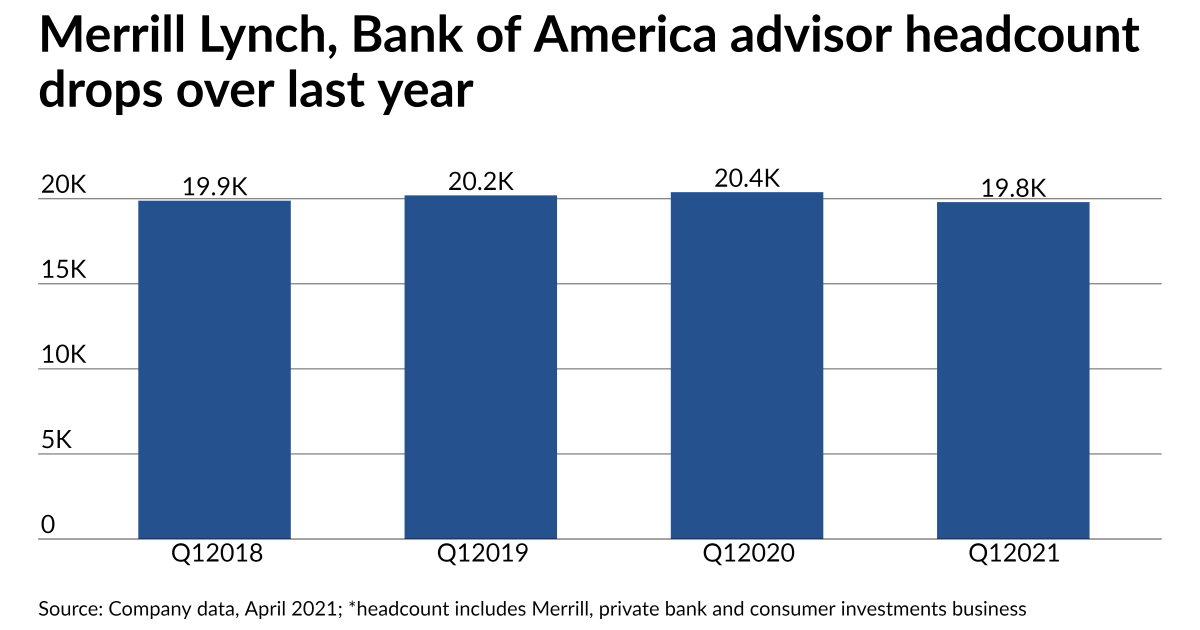 Bank of America lost a net 585 advisors in the twelve months ending in March, reducing its headcount to 19,808 advisors, according to the company. A net 295 of those departures took place in the first quarter of this year — more defectors than left rival Wells Fargo in the same period. (Bank of America’s financial advisor headcount includes advisors across Merrill, the private bank and the consumer investments business.)

The company attributes a “large part” of last year’s attrition to “slower hiring into our advisor development program” due to the coronavirus, a senior executive at Merrill Lynch told reporters ahead of Bank of America’s earnings call April 15. The executive spoke on condition of anonymity.

The wirehouse’s advisor development program, one of the largest and most well-known training programs for industry entrants, has had a tumultuous year.

Last April, approximately 650 advisors-in-training were repositioned within the bank to field banking customer calls, according to a Business Insider report.

In July, the wirehouse paused client prospecting within the program. Business Insider later reported there had been a series of prospecting violations across the firm.

The training program’s director, Jennifer MacPhee, retired at the end of last summer after serving in that role for a little more than a year. She denied that her retirement correlated to any violations in the program, according to AdvisorHub.

Just this week, Business Insider reported low morale in the program. Trainees were sitting through frequent virtual training sessions and their outbound calls were being monitored, according to the report.

When asked by Financial Planning about hundreds of trainees being moved to assist in banking operations, the senior executive confirmed that the number was “roughly accurate.”

Newer members of the development program, who had not yet begun working with clients, and some who had not yet obtained their securities licenses, had been moved to help staff Bank of America’s Paycheck Protection Program loan initiative, the executive said, adding that this would continue for the next month or two and that “their time away” from the program would be considered in the time allotted to complete the program.

Regarding reports of low morale, the executive stated that these trainees were “very proud of their opportunity” to help the country during the pandemic, and said that the work would make them more well-rounded.

“They’re learning the company and aspects of financial services that are outside of what they would have experienced in the first couple of years, and so that’s only going to make them more effective in terms of serving clients going forward,” the executive said.

The company plans to unveil its new advisor development strategy over the next few months, the executive said, without giving specifics. The company said at the end of last year that Eric Schimpf, the Southeast division executive and managing director for the community markets, and Matt Gellene, head of consumer client management and consumer banking and investments, are co-leading the effort.

On the call, the company also addressed prospecting methods on the call, namely cold calling, which has proven to be a compliance issue at the wirehouse in recent years within its development program and wirehouse branches, according to a Financial Planning investigation.

The executive said on the call that the company is shifting away from cold-calling, saying Merrill Lynch can more effectively reach clients by better leveraging Bank of America. The company said it would utilize platforms like LinkedIn to reach out to clients and that it was focused on being “much more modern.”

As for its existing workforce, Merrill brought on more than 6,000 net new households and had about $2.9 trillion in client balances, which is up 32% year over year. Many wealth management firms have experienced record inflows over recent months with the markets surging, and reaped the benefit of new investors entering the market and increasing demand for advice.

At Merrill, 90% of its financial advisors are on track to exceed last year’s results, and 80% are on track to have their best year on record, according to the executive. Revenue within Merrill was up $4.2 billion by the end of March, Merrill’s second best quarter in history.

Later on this month, the company said it would be launching a fully digital client onboarding process, which it anticipates will reduce the time to open an account from about one week to a day. It launched personalized client videos earlier this year.

Bank of America says it remains committed to growing its firm organically through its training programs, rather than recruiting from competitors. The company brought on 210 advisors through both its accelerated growth program, which is aimed at advisors early in their careers, as well as its community market program which focuses on underserved markets. It brought on 60 new advisors in the first quarter from these programs, it says.