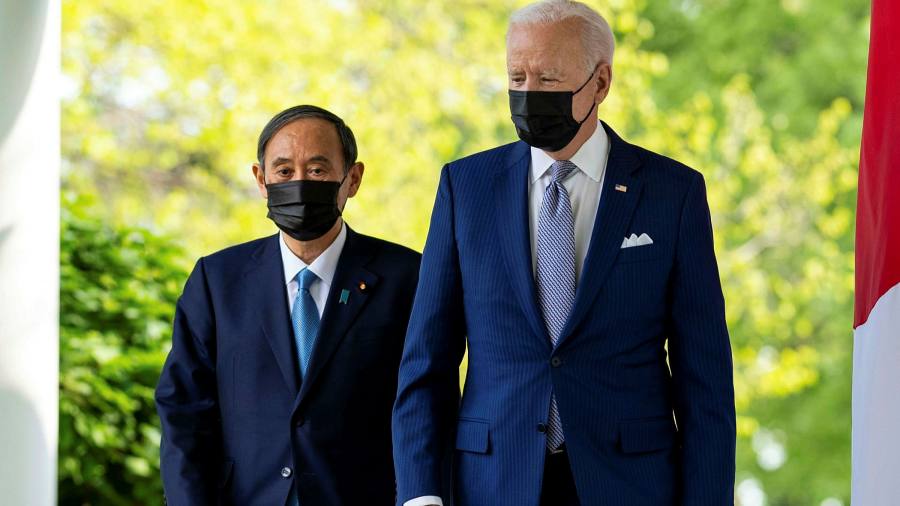 Japanese prime minister Yoshihide Suga said the US and Japan would “oppose” coercion or force in the South and East China Seas, in unusually blunt remarks about China after his summit with Joe Biden.

Speaking alongside the US president at the White House on Friday, Suga said the two leaders had held “serious” discussions about China and the “severe security environment” in the Indo-Pacific region.

“We agreed to oppose any attempts to change the status quo by force or coercion in the East and South China Seas and intimidation of others in the region,” Suga said.

The US and Japan are concerned about Chinese military activity near Taiwan in the South China Sea. They are also worried about Beijing’s actions around the Senkaku Islands in the East China Sea that are administered by Tokyo but claimed by China, which calls them the Diaoyu.

Suga said the leaders also stressed the importance of peace in the Taiwan Strait, in language that highlighted growing concern in the US and Japan about rising Chinese military activity around the island.

He said the two leaders had also “reaffirmed” the recent statement that their top defence and foreign policy officials had made in Tokyo about “the importance of peace and stability of the Taiwan Strait”.

Michael Green, a Japan expert at the Center for Strategic and International Studies in Washington, said Suga’s comments on Taiwan were the most assertive from a Japanese leader since the US and Japan both switched diplomatic recognition of China from Taipei to Beijing in the 1970s.

“There was a lot more nodding to the Taiwan problem than we have seen in a US-Japan summit since 1969,” he said, referring to the summit Richard Nixon held with prime minister Eisaku Sato.

Green added that Suga’s statement about opposing unilateral efforts to change the status quo mirrored a phrase that the US has used about Taiwan since the George W Bush administration.

At the press conference, Biden said the US and Japan were “committed to working together to take on the challenges from China” including the East and South China Seas.

China immediately criticised the joint statement, saying the comments from the US and Japan went “far beyond the scope” of normal bilateral relations.

“It cannot be more ironic that such attempt of stoking division and building blocs against other countries is put under the banner of ‘free and open’. The scheme of the U.S. and Japan goes against the trend of the times and the will of people in the region,” China’s embassy in Washington DC said in a statement.

The statement also re-iterated that Taiwan, Hong Kong and Xinjiang were China’s “internal affairs” and that Beijing will “firmly safeguard its national sovereignty, security and development interests”.

Japan has become increasingly worried about Taiwan since any US-China conflict over the island would draw in Tokyo because of its mutual defence treaty with Washington.

A senior US official recently told the Financial Times that Washington was worried that China was flirting with the idea of invading Taiwan, which Beijing claims as part of its sovereign territory.

In addition to Suga’s comments at the news conference, the leaders reiterated their concern in a joint statement issued after the summit, the first time such language has been included since the Nixon-Sato meeting.

In the statement, the leaders said they also shared “serious concerns regarding the human rights situations” in Hong Kong, where China has cracked down on the pro-democracy movement, and also in the northwestern province of Xinjiang.

The White House had pushed Suga to voice support for Taiwan ahead of the summit but Japanese officials were divided over whether he should agree to refer to the island during his visit to the US. Some argued that the recent statement in Tokyo had sent a strong enough signal to China, while others said Japan should demonstrate a united front with the US.

Suga was the first foreign leader to visit Biden since he entered the White House in January, underscoring the importance the US is putting on relations with Japan as part of his broader strategy to counter China.

Ahead of the summit, China had warned Japan to avoid getting involved in the “confrontation” between Washington and Beijing.

As well as taking aim at China, Suga said he would push to reinforce Tokyo’s defence capabilities and bolster US-Japan deterrence.

“China has engaged in a massive military build-up in Japan’s backyard — while increasingly menacing territory that Japan sees as its own. Yet Japanese defence budgets have remained at a remarkably low level, at 1 per cent of gross domestic product,” said Jennifer Lind, an Asia security expert at Dartmouth College in New Hampshire. “The dangers from China mean that Japan simply must do more. And Suga’s statement suggests that it will.”

Inflation Watch: We Are Entering the Final and Most Critical Phase
What Will You Do When Inflation Forces U.S. Households To Spend 40 Percent Of Their Incomes On Food?
The key to Northern Ireland’s future lies in retaining its young talent
With 212 possible designations, what exactly is a financial planner?
Gold’s Pullback A Buying Opportunity