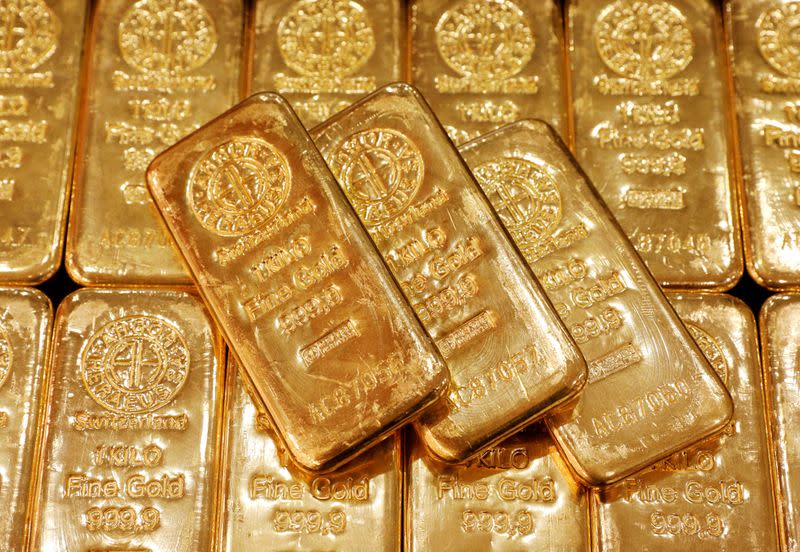 (Reuters) – Gold prices fell on Friday as robust economic data from China boosted hopes of a swift recovery, although bullion was set to rise more than 1% on the week as the U.S. dollar and Treasury yields pulled back from recent highs.

Still, the metal has gained nearly 1.5% this week, after two weeks of losses.

“The (falling) dollar and Treasury yields have helped gold this week along with the Fed’s dovish tone, that has been topped with lockdowns in Europe and parts of Asia with some negative vaccine results,” said Brian Lan, managing director at dealer GoldSilver Central. [USD/]

“On the other side, a strong data set from the United States have led some short-term investors to book some profits after the metal climbed to a one-month high on Thursday.”

Federal Reserve Chair Jerome Powell on Thursday signalled the central bank is nowhere near to reducing its support for the U.S. economy and cautioned that the anticipated price increase this year is likely to be temporary.

“The likely rise in inflation April could support gold prices in the coming weeks, especially if it rises faster than bond yields. In the more medium term, the rise in bond yields is likely to put renewed pressure on gold,” Fitch Solutions said in a note.

(Reporting by Diptendu Lahiri and Swati Verma in Bengaluru; editing by Uttaresh.V and Amy Caren Daniel)