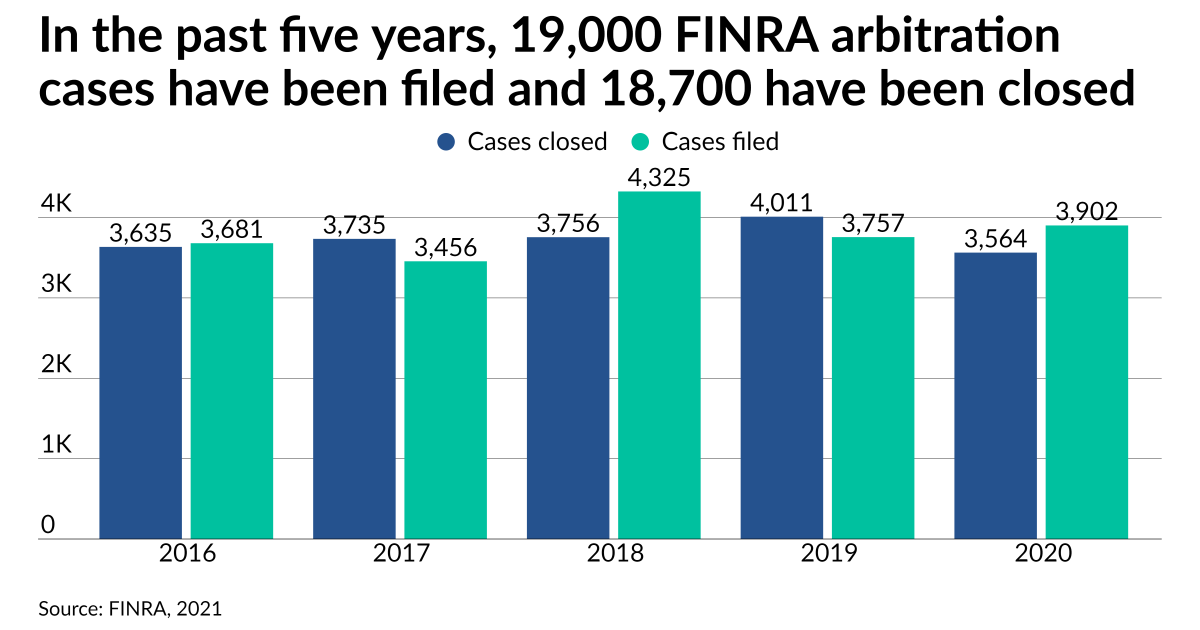 A new bill recently re-introduced in Congress would give wealth management clients the choice of pursuing any claims against firms in court or through arbitration.

At least 12 Democratic members of the House and Senate have signed on as co-sponsors of the Investor Choice Act — introduced April 15 by Rep. Bill Foster of Illinois and Sen. Jeff Merkley of Oregon. The legislation would ban provisions of brokerage and RIA customer contracts requiring clients to pursue any damages or other legal claims through arbitration.

Lobbyists and trade groups are lining up on either side of the bill. While the pending legislation has earned support from the North American Securities Administrators Association, the Public Investors Advocate Bar Association and other organizations, the Securities Industry and Financial Markets Association opposes it and the Financial Services Institute hasn’t taken a position. In the absence of industry advocacy or Republican votes, passage of the bill — a longtime piece of legislation that’s been introduced regularly for roughly the past decade or so — is “going to be difficult,” says Christine Lazaro, a PIABA board member and the director of the Securities Arbitration Clinic at the St. John’s University School of Law.

“Issuers, brokers, dealers, and investment advisers hold powerful advantages over investors, and mandatory arbitration clauses — including contracts that force investors to submit claims to arbitration or to waive the right of investors to participate in a class action lawsuit — leverage those advantages to severely restrict the ability of defrauded investors to seek redress,” the legislation reads. “Investors should be free to choose arbitration to resolve disputes if they judge that arbitration truly offers them the best opportunity to efficiently and fairly settle disputes and pursue remedies in court should they view that option as superior to arbitration.”

The bill comes amid efforts to ban all mandatory arbitration for workers and customers, including for victims of sexual harassment. In addition, the lawmakers re-introduced it days before FINRA reported that “customer agreements used by some member firms contain provisions that do not comply with FINRA rules” about predispute arbitration agreements, according to a notice issued by the regulator on April 21.

FINRA rules prohibit member firms from dictating arbitration hearing locations, reducing or increasing the six-year statute of limitations or waiving clients’ rights to class action, among other guidelines, the notice states. Claimants have filed between 3,400 and 4,400 arbitration cases against firms in each of the past five years, according to FINRA.

SIFMA stands behind the current rules.

“The securities arbitration system has worked effectively for decades because it is subject to public oversight, regulatory oversight by multiple independent regulators, and rules of procedure that are designed to benefit investors,” SIFMA CEO Kenneth Bentsen said in a statement. “Predispute arbitration agreements are a vital component of this system.”

Representatives for the Insured Retirement Institute declined to comment on the bill. The National Association of Insurance & Financial Advisors didn’t respond to an inquiry for the group’s position.

On the other side, the bill has picked up backing from progressive advocacy group Public Citizen and the American Association of Justice, an organization for trial lawyers. State regulators under NASAA wrote last July to Merkley expressing approval of the bill.

“NASAA has long been concerned with the widespread use of mandatory predispute arbitration clauses in customer contracts used by broker-dealers and, where applicable, investment advisers,” former President Christopher Gerald said. “These ‘take it or leave it’ provisions deny retail investors important choices in resolving disputes with their investment professionals.”

In the group’s own statement supporting the bill, PIABA President David Meyer pointed out that RIA clients are “usually forced into other arbitration forums” that are costly and haven’t undergone the same improvements as FINRA arbitration rules in the past 20 years. The claims of smaller investors with smaller accounts are “generally well-suited” for arbitration, though it depends on the case, Lazaro says.

“There’s no question that they benefit from the confidentiality of the system,” Lazaro says. “The question back to the firms, generally, is, ‘If it’s such a great alternative to resolve disputes, then why is there the fear that investors won’t voluntarily choose it?’”