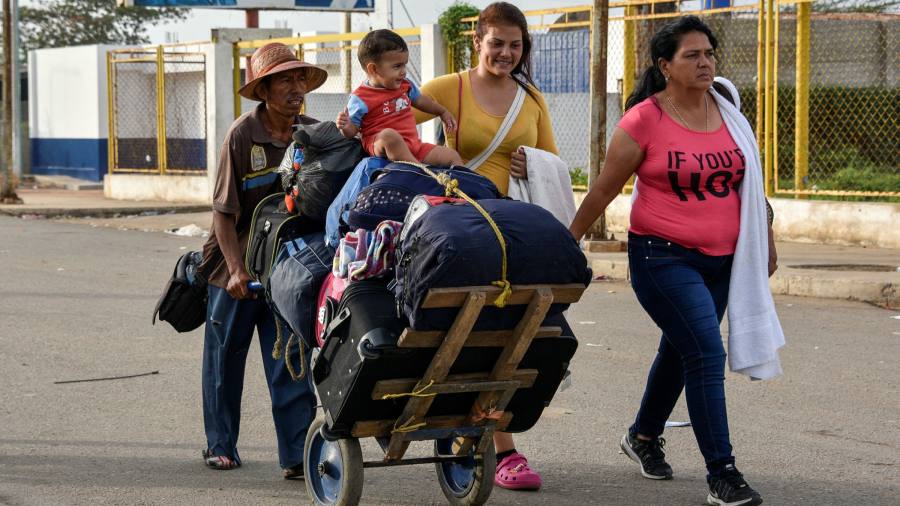 The writer is UN High Commissioner for Refugees

The decision this month by Iván Duque, president of Colombia, that his government will grant temporary protection status to almost 2m Venezuelan refugees and migrants could turn the tide on one of the biggest crises of its kind in recent history.

A move that is both compassionate and pragmatic, it deserves immediate international support. In fact, with more than 80m displaced people around the world, its vision of both protecting and empowering the vulnerable should apply to every major humanitarian emergency.

About 5.5m Venezuelans have left their country in recent years, mainly for other parts of Latin America and the Caribbean. There they have found respite from the political upheaval and economic chaos at home. But hundreds of thousands have also been stranded without jobs, shelter or healthcare.

This was made plain to me when I visited a disused airstrip in Maicao, in northern Colombia. Now serving as a shanty town, it is the epitome of poverty and hopelessness, suffused with the threat of violence. Yet thousands of people have ended up in such places, exhausted and penniless, often forced to sleep rough.

Of course, every refugee and migrant crisis is different and each needs a specific approach.

Across the Sahel, renewed violence has displaced 2m people in the past few months, while this year marks a decade since conflict erupted in Syria, driving 6.6m people across the border in search of safety. Some refugee situations, such as Afghanistan’s, endure for decades. Others flare up after long periods of relative stability. Many crises today are exacerbated by the effects of climate change or unforeseen threats such as Covid-19.

But even though the circumstances of each case may differ, a sweeping and timely response can make the difference between life and death. In fact, granting wide-ranging access to social rights before more permanent solutions can be found has been an effective response in the past.

European states deployed it during the refugee crisis that was sparked by the Balkan wars of the 1990s. Turkey also extended access to essential services for refugees soon after violence in Syria erupted in 2011.

In Colombia, the 10-year grant of temporary protection status takes an entire refugee and migrant population out of legal, financial and social limbo. As such, it is the boldest and most visionary response to date in the Americas to Venezuela’s humanitarian crisis. Crucially, it also recognises that protecting and supporting large numbers of vulnerable people has mutual benefits.

By allowing refugees to enter the job market, instead of relying on the informal sector, it reduces their dependency on humanitarian aid and lets them contribute to Colombia’s post-pandemic economic recovery.

By enabling access to the country’s national health system, it opens the door to Covid-19 vaccination plans — an urgent need of the poor and vulnerable everywhere, regardless of their legal status. Allowing refugee children to go to school further helps restore dignity and purpose. The measure is about as close to the definition of a win-win solution as you can get.

Clearly, announcing a policy does not by itself change reality on the ground. Success will require support from international donors, humanitarian organisations, development banks and the private sector. It will need investment in the form of job creation, vocational training and apprenticeships; an expansion of healthcare; funds for housing support and other benefits for the most vulnerable; and more.

About 85 per cent of refugees are located in developing countries. Educating them is not easy when there are not enough schools and teachers. Similar capacity problems apply when it comes to labour markets, healthcare and housing. More than one state has made steps towards inclusive policies, only to falter thanks to a mix of financial constraints and strident populism.

But the returns on such investments are large: safer and more orderly population movements, more informed and targeted public policies based on better data, more efficient mobilisation of resources, a stronger economy, a more robust labour market and a bigger post-pandemic rebound, and more hospitals, clinics and schools. Crucially, these improvements will endure long after the Venezuela crisis has passed.

Colombia is bucking the global trend of marginalising and even demonising refugees and migrants — and it has both moral right and pragmatism on its side. Other countries should take note and follow suit.