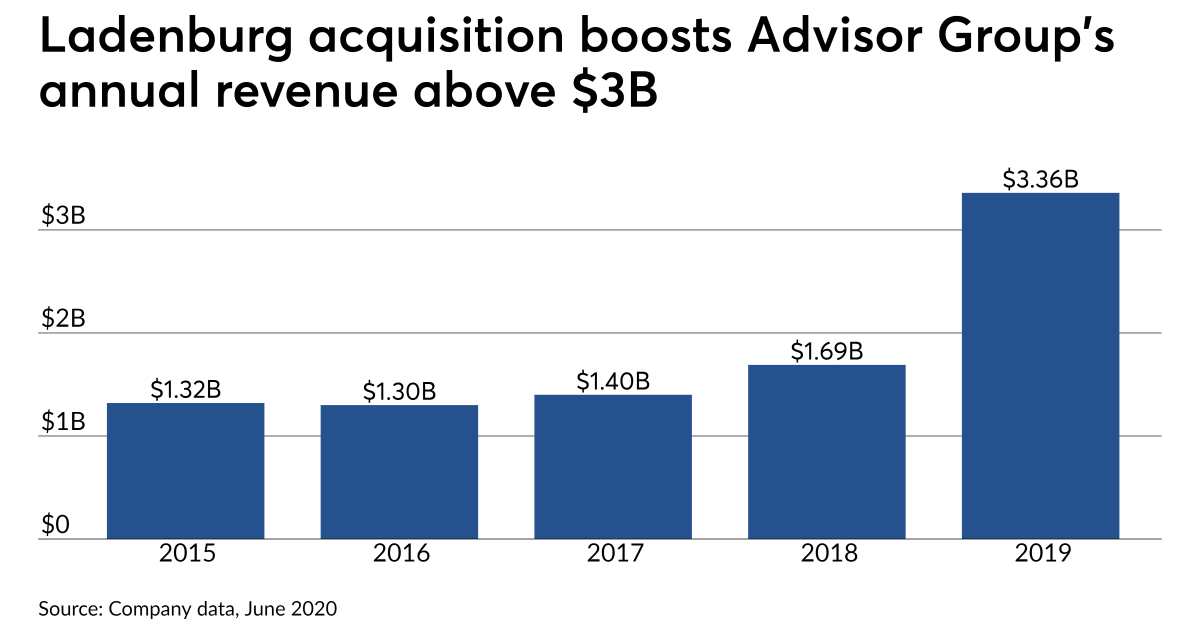 A year after adding thousands of financial advisors from a massive acquisition, Advisor Group is taking steps to build connections across its six firms.

The 11,000-advisor network held the first quarterly meeting of its new National Advisory Board of a dozen advisors last month, according to Erinn Ford, the Phoenix-based wealth manager’s executive vice president of advisor engagement. Advisor Group appointed advisor Debra Brennan Tagg the chair of the committee and made Ford its executive sponsor.

Advisor Group’s independent broker-dealers each have their own advisor councils, but the new council will supplement their work. Other wealth managers have created similar councils in recent years, as well as groups collaborating with executives on diversity and inclusion efforts and technology upgrades. After taking over her new role a couple of weeks ago, Ford also says she’s planning a comprehensive program aimed at advancing women and people of color across Advisor Group’s expanded network after last year’s Ladenburg Thalmann acquisition.

Describing herself as “a fan of honest and direct feedback,” Ford says the discussion at the inaugural board meeting revolved around tech and the varying needs of practices based on whether they’re solo firms, ensembles or large enterprises.

“We definitely came out with some really distinct themes that they shared with us,” Ford says. “It brings that culture of connection and makes that feedback for us very actionable.”

“The National Advisory Board will provide real-time, on-the-ground intelligence to Advisor Group to inform future enhancements to the tools we use to serve our clients, as well as the development of new services, platforms, and corporate strategy,” Brennan Tagg said in a statement.

The new board and “further reinforcing the lines of communication between the parent company and the advisor community” will help Advisor Group strengthen its relationship with practices nationwide, according to Kropp, whose firm is affiliated with Securities America and based in Omaha, Nebraska. In an email, she acknowledged that some advisors decided to go to other firms after Advisor Group bought Ladenburg.

“Each advisor has their own thought process when it comes to the long-term decisions they make for their practice, and it’s not unusual for some of those advisors to be approached with large upfront recruiting offers when there’s a change of control of their broker-dealer,” Kropp says. “With that said, Advisor Group has done a great job of quickly re-establishing a sense of stability and reassurance that they understand advisors’ views and are committed to helping us grow.”

While the group hails from 10 different states, each of Advisor Group’s firms, and a range of tenures with the network, it doesn’t include any members who are Black, Latino or other minorities. However, diversity and inclusion will be “an area of real focus and energy” of Ford’s role, she says, adding that the firm’s new program will roll out within the next few months.

“Our whole profession needs to become a better reflection of the communities that we serve,” Ford says. “I’m looking to bring forth definitely a number of proposals.”

Rival firms have garnered praise from advisors through programs like the Advisor Inclusion Council started by LPL Financial in 2018 and the Black Financial Advisors Network opened by Raymond James in 2015. The other major IBD network besides Advisor Group, Cetera Financial Group, launched seven advisor councils around various topics in 2018 as well.

Advisor Group built its annual W Forum for women advisors into an event attracting hundreds of them each year. In addition, the firm has several executives who are women, including Chief Strategy Officer Cindy Hamel, Head of National Sales Allison Pratt and the new CEO of Advisor Group firm SagePoint Financial, Desireé Sii.

Ford had served as president of Cetera Advisors for six years before she joined the ex-Ladenburg firm KMS Financial Services in 2018. Reverence Capital Partners-backed Advisor Group purchased KMS and the four other Ladenburg wealth managers for $1.3 billion before consolidating Ford’s firm and two others into the largest ex-Ladenburg firm, Securities America.

The next meeting of the new board of advisors in April will focus on tech, with participation from Advisor Group’s new senior vice president of digital solutions, Peter Clemson, according to Ford. The advisors will also break up into smaller groups divided by their business models.

As her team considers additional councils, Advisor Group’s goal is to “drive solutions and find those growth opportunities” through the groups, Ford says. “I always want to make sure that we help make every council alive, that we’re really listening to and accountable to that feedback.”

Cooper Tire Pops 28% On $2.8B Takeover Deal By Goodyear
Researcher Finds an Old Twitter Profile May Have Been Satoshi Nakamoto’s Account
Broadridge looks to securities-based lending to extend its footprint in wealth management
Maryland P3 agreement a milestone in U.S. market
Doug Casey on Rapidly Rising Taxes and 3 Other Imminent Dangers to Your Wealth