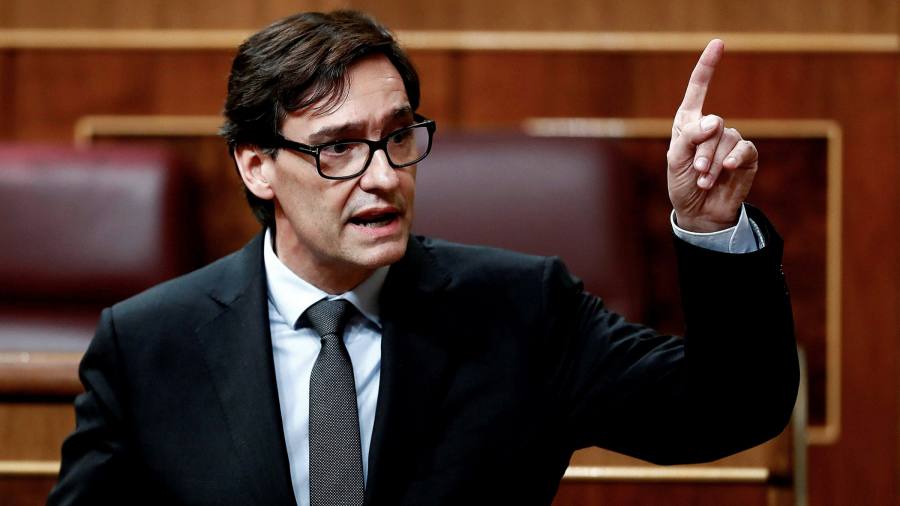 Spain’s health minister quit on Tuesday to run as his party’s lead candidate in Catalonia’s regional elections, a political gamble by the ruling Socialists when the country is contending with a record number of coronavirus cases.

The party is seeking to capitalise on what supporters say is the reputation Salvador Illa has forged over the past year as a voice of calm amid Spain’s hyper-partisan debate.

But critics depict the 54-year-old as an opportunist who has left the health ministry at a precarious moment: infection rates are higher in Spain than in any other large EU country and have been rising rapidly.

“He is leaving the state at the worst time, with record infections,” said Carolina Telechea, an MP for the pro-independence Catalan Republican Left. “He is more interested in votes than in lives.”

At a press conference on Tuesday, Mr Illa said he “would always be where I can be most useful”, adding that recent data indicated rates were beginning to decline.

Mr Illa was a relatively little known Catalan Socialist official before being chosen by Prime Minister Pedro Sánchez to join the national government a year ago, his profile rising as the Covid-19 crisis deepened. He will fight the Catalan election — scheduled for next month — largely on his record as Spain’s health minister.

He recently declined to back calls from Spain’s regions for more powers to fight coronavirus and the course of the pandemic over the next couple of weeks could shape the election result.

At present, Spain is running at 885 infections per 100,000 of population over 14 days — its highest contagion rates of the pandemic, although first wave data are incomplete.

The timing of the Catalan vote has yet to be settled. While almost all the other main parties favour delaying it until May 30 because of the health emergency, the Socialists are anxious for it to take place on the originally scheduled date of February 14 and the courts have so far ruled against postponement.

Mr Sánchez is hoping to de-escalate tensions with Catalonia’s nationalists after a turbulent decade in which the regional parliament issued a unilateral declaration of independence following an illegal referendum in 2017, prominent separatist politicians were jailed for sedition and Madrid imposed a period of direct rule.

The last regional elections, in December 2017, returned a narrow victory for the pro-independence camp — with less than 50 per cent of the votes but a majority of seats in the Catalan parliament — leading to a continued impasse with the central government in Madrid.

Some, but not all, recent polls have given a narrow lead to the Socialists — an apparent indication of an “Illa effect”, with the party closely followed by the two main separatist groupings, the Catalan Republican Left and Together for Catalonia.

“The pro-independence parties are acting as if they have a rival who is dangerous, and could really win — that has transformed the electoral landscape from past elections, which were seen as plebiscites on independence,” said Oriol Bartomeus, a professor of politics at the Autonomous University of Barcelona. “But the evolution of the pandemic could really be the factor that hurts Illa and the Socialists.”

No single party expects to win a majority and Mr Bartomeus said the positions of the main three parties would do much to decide if the pro-independence parties can form another government — and how hardline such an administration would be.

Of the two big pro-independence parties, the Catalan Republican Left, whose leader Oriol Junqueras is still in prison for his role in the events of 2017, is more willing to co-operate with the Socialists and has backed Mr Sánchez in crucial votes in Madrid. By contrast, Together for Catalonia, led by Carles Puigdemont, a former regional leader who fled the country rather than face arrest, favours a more confrontational approach.

Together For Catalonia has accused Mr Illa of “complicity with fascism” for his past support of direct rule.