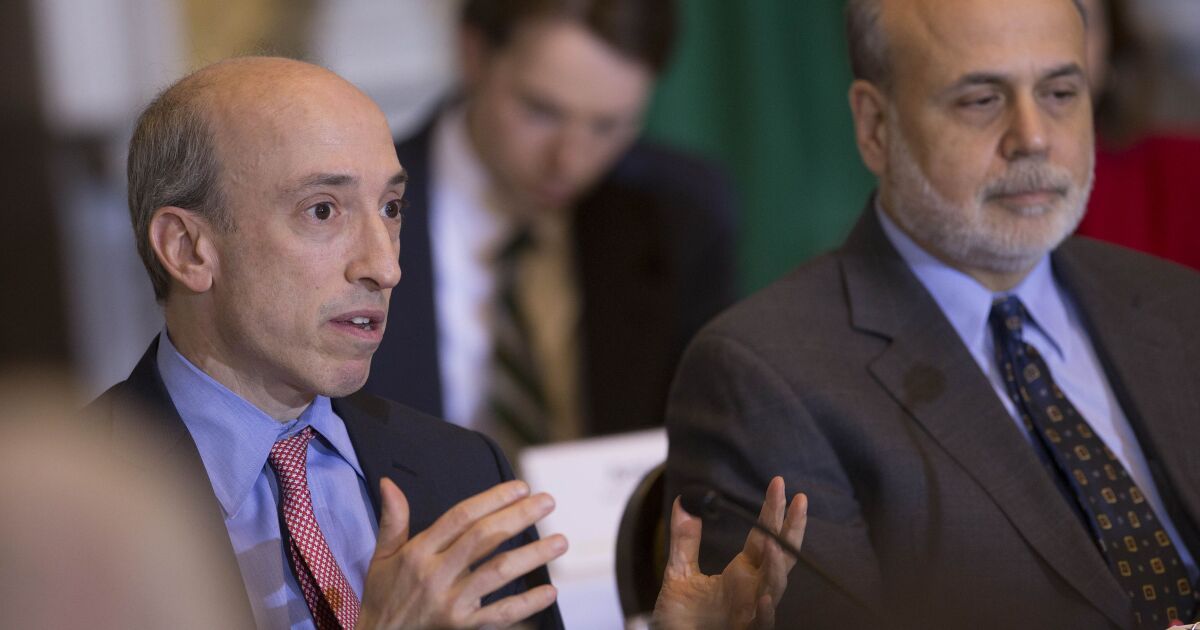 The tale of Gary Gensler’s transformation has always been remarkable. He went from being one of the youngest partners in the history of Goldman Sachs to becoming a favorite of progressive Democrats as a financial regulator during the Obama administration. Now, it’s about to add another chapter and Wall Street is very worried.

President-elect Joe Biden is expected to pick Gensler, 63, to head the SEC. Corporate executives are already bracing for him to steer a sharp turn from the more laissez-faire approach taken by the agency during the Trump administration. Progressives’ expectations are sky high for the same reason. He’s best known for winning bruising battles with financial titans when he led the nation’s top derivatives regulator following the 2008 financial meltdown.

“The sheriff is coming to the preeminent financial regulator in the world,” said Justin Slaughter, a consultant at Mercury Strategies in Washington who previously worked at the Commodity Futures Trading Commission. “It means regulation and enforcement are about to get much tougher.”

Financial lobbyists, who Gensler sometimes referred to as “the enemy” during the battle over the 2010 Dodd-Frank Act, spent Wednesday commiserating with each other over emails and telephone calls.

At the SEC, Gensler will face a set of brewing crises, much as he did while running the CFTC, from concern over a stock market bubble to rising tensions with China. He’s most likely to spook Wall Street with a bare-knuckled approach to attacking what progressives see as many of the excesses of the Trump era. They range from the ballooning growth of private equity to policies that they say put banks, traders and corporate executives ahead of mom-and-pop investors.

Democrats are counting on Gensler, who has declined to comment on the expected nomination, to boost enforcement and fines for financial firms and executives accused of wrongdoing. He will also face pressure to push companies to disclose political spending, climate-change risks and the diversity of their employees.

“He developed a reputation for being adversarial to Wall Street because he came from the industry and understood the business so he could push back against their arguments when they were hollow,” said Graham Steele, who served as an aide to Senator Sherrod Brown of Ohio, and is now director of the Corporations and Society Initiative at Stanford University.

Ian Katz, an analyst at Capital Alpha Partners in Washington, adds another reason why bankers are fearful of Gensler.

“What’s really unnerving to a lot of people is that it’s pretty clear that he doesn’t need them,” Katz said. “He doesn’t need to go back there for a job, he’s made his money. He’s not terribly interested in who he ticks off or not and that’s very powerful.”

His money comes from his years at Goldman, which he joined in in the late 1970s out of the University of Pennsylvania’s Wharton School. His mentor was Robert Rubin, who rose to vice chairman of Goldman before becoming Treasury Secretary in the Clinton administration. Gensler had stints trading stocks and bonds, and also worked on the mergers and acquisition team, before eventually making partner. He left the firm in 1997 to follow Rubin to Treasury.

His Wall Street background didn’t exactly endear him to progressives when President Barack Obama selected him to head the CFTC in 2009. Vermont Senator Bernie Sanders, in the wake of the financial crisis, tried to block his nomination.

But Gensler, who’s known for wearing ties that are too long for his slight stature and having holes in the soles of his loafers, eventually won over his critics. Some on the political left even began to see his time in industry as an advantage because he understood how financial firms sought to dodge regulation.

He pushed for an aggressive approach to implementing Dodd-Frank, which called for reforming the derivatives market. He won over progressives for his insistence for a tough version of the Volcker Rule, which banned proprietary trading by Wall Street firms, over stiff resistance from financial firms including Goldman, JPMorgan Chase and Citigroup.

Under Gensler, the CFTC, which was long considered a backwater, became a major Wall Street regulator. At the same time, his hard-charging style left some staff exhausted and ultimately contributed to a push to unionize.

That approach may be a challenge for Gensler at the SEC, which is more than five times the size of the CFTC. One person at the SEC who asked to remain anonymous said that staff there have noted that morale plummeted during his CFTC tenure. A survey of federal employees at the time named the derivatives regulator as one of the worst places to work among small agencies, giving it low marks for work-life balance, pay and quality of leadership.

Still, few dispute the output of the agency while he was in charge. Gensler was at the forefront of the push for tough new rules on one of Wall Street’s biggest profit machines: the over-the-counter derivatives markets. He oversaw a slate of new rules and series of enforcement actions. Many of the biggest banks in the world paid billions of dollars in fines for rigging a rate used to price everything from complex derivatives to mortgages.

He also put in place a regime, some of which was undone in the Trump era, that meant CFTC oversight would apply to derivatives’ transactions involving American banks that were handled in foreign countries. In the face of lawsuits from industry and intense lobbying on Capitol Hill, Gensler made his case for tighter regulations in the media.

The sheriff is coming to the preeminent financial regulator in the world. It means regulation and enforcement are about to get much tougher.

Critics point out that while Gensler expanded the CFTC’s jurisdiction, he failed to secure budget increases from Congress to match the increased responsibilities, leading to a years-long cash crunch. The regulator also drew criticism from Capitol Hill for failing to prevent the implosion of MF Global Holdings and $1 billion of client money going missing.

Gensler, in his current role as a professor at MIT’s business school, has testified before lawmakers about cryptocurrencies where he argued for Washington to take a more active role. Still, the nascent crypto industry is optimistic that Gensler will be more open to digital assets than former SEC Chairman Jay Clayton, who was widely seen as an impediment to their adoption.

If he choses, Gensler will be able to use the SEC’s reach to push for racial and financial inclusion, which Biden has said are priorities. His appointment may also accelerate efforts to get companies to disclose the race and gender of corporate directors, which is currently not required by SEC regulators or federal law.

”At a time when many are questioning whether capitalism can really work for everyone and address huge societal challenges like racial justice and climate change, the importance of the SEC becomes enormous: it sets the rules for companies and their investors,” said Tyler Gellasch, a former SEC aide who now runs the Healthy Markets trade group whose members include large asset managers.