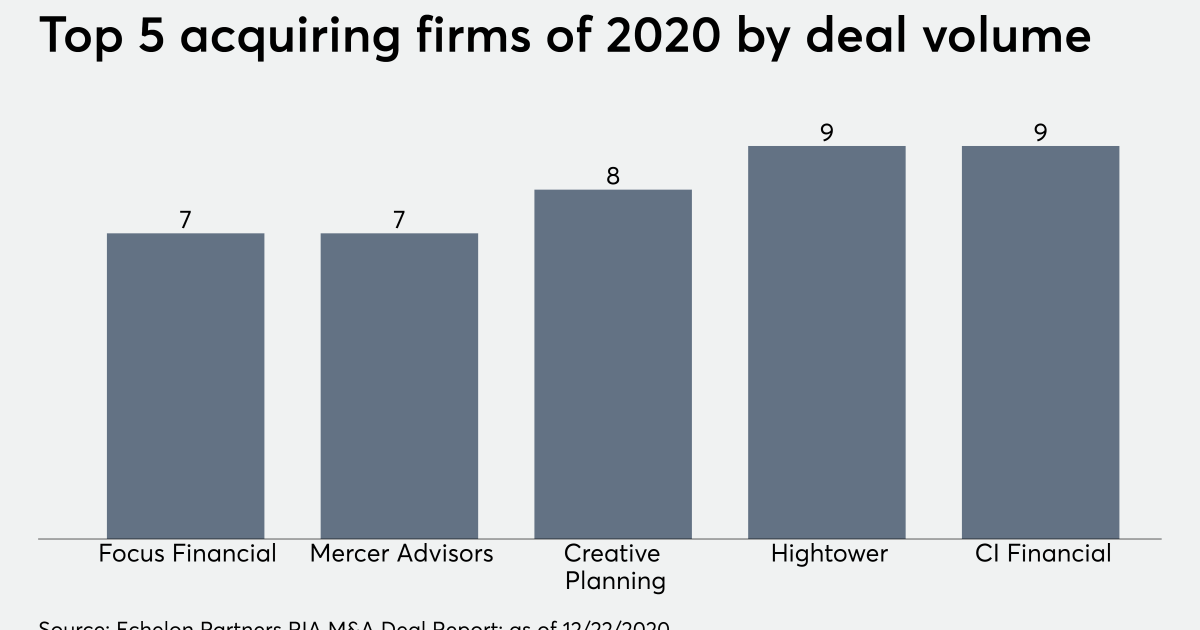 Nearly 30 years after two financial advisors started their practice with a couple of telephones and Rolodexes, they sold it to one of the largest private equity-backed RIA acquirers.

Julianne Andrews and Cathy Miller of Atlanta Financial Associates have “not a few but many clients who were with us” when they launched in 1992, Andrews noted in an interview with the co-founders. On Jan. 7, Mercer Advisors announced it had acquired Atlanta Financial, which now has a 13-member advisor team and $815 million in assets under management.

With seven deals announced before Dec. 22, the Oak Hill Capital and Genstar Capital-backed firm is one of the most active acquirers in wealth management, according to Echelon Partners, an investment bank and consulting firm. Mercer is also the No. 3 firm onFinancial Planning’s RIA Leaders ranking of the largest fee-only RIAs.

The parties didn’t disclose the terms of the deal.

Andrews and Miller say the choice of Mercer capped about a year of work narrowing down suitors in consultation with investment banking firm Park Sutton Advisors. The succession plan-focused deal will “fast forward the development of the firm by a decade or more,” according to Miller.

“The business has gotten so much more complex,” she says. “At this stage in our career, we wanted to get back into what got us into the business in the first place, which is working with clients.”

Atlanta Financial has 19 employees, including Rick Henderson and Chris Blackmon, who are fellow shareholders in the practice along with Andrews and Miller. Post-deal, the firm is retaining its broker-dealer affiliation with Purshe Kaplan Sterling Investments and its custodial relationship with Charles Schwab.

Succession planning requires a major financial commitment from owners that can reduce the bottom line and create internal strife among employees, according to Carolyn Armitage, a managing director with Echelon.

“An external succession plan with the right partner” has proven “a terrific solution for so many advisors looking for that succession plan,” Armitage says. “It’s really difficult for advisors to get their arms around for a variety of reasons.”

Denver-based Mercer has more than 440 employees and advisors managing nearly $25 billion in client assets out of more than 45 offices across the country. In addition to the Atlanta Financial deal, the firm has already unveiled three other acquisitions in 2021 for RIAs with more than $2.4 billion in combined AUM: McGee Wealth Management, Kays Financial Advisory and Rowland Carmichael Advisors.

Miller notes that she began her career as a financial advisor on Black Monday in 1987. The two founders of Atlanta Financial adopted fee-based services in the early 2000s before it was common to do so in the industry. Andrews recalls that it was also “a little bit unusual to have a women-founded” wealth management firm in 1992.

Under Mercer, their team will gain access to estate planning and other services associated with family offices, according to Miller.

“This move to Mercer is our recognition that clients want a more comprehensive service,” she says. “We think this really positions us to compete locally really well and gives us the platform to take us through the next few decades.”

How Mat Ishbia Cashed In On The Biggest SPAC Ever: From Benchwarmer To $13 Billion
IAMGOLD and Sumitomo confirm significant gold mineralization near Côté
Enjin Coin Becomes the First Gaming Cryptocurrency Approved by Japanese Regulators
Rock, Paper, Scissors? What’s The Best Way You Can Learn How To Retire?
No Taxation Without Reform