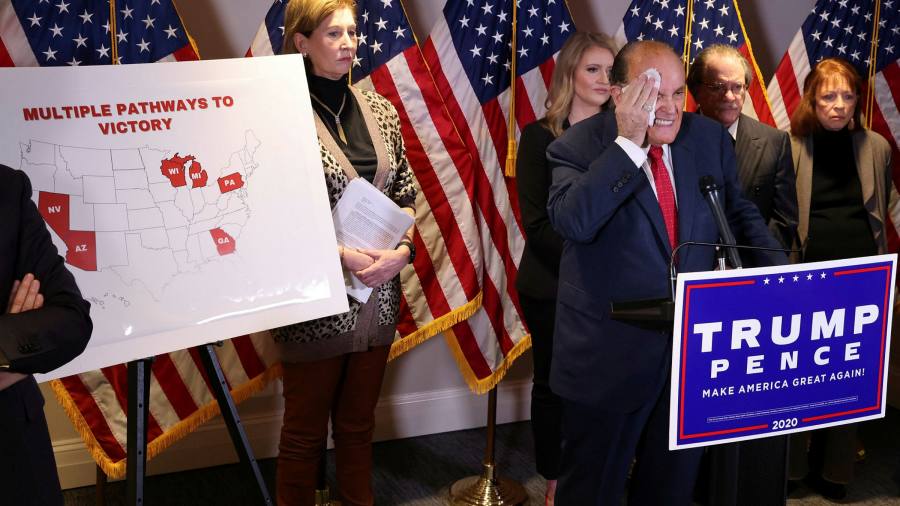 Donald Trump’s legal advisers, including Rudy Giuliani, the former New York City mayor, vowed on Thursday to file more lawsuits challenging the results of the presidential vote while dismissing calls that they support their claims that Democrats stole the election.

The threat of more legal action came at a press conference in Washington, where Mr Giuliani made unsubstantiated allegations of widespread voter fraud, mopping sweat from his brow while what appeared to be hair dye trickled down his face.

Jenna Ellis, another campaign adviser, described the almost two-hour long press conference as merely an “opening statement”, and chided the media for asking for evidence to support their claims.

“Your question is fundamentally flawed when you’re asking where’s the evidence,” said Ms Ellis, claiming the Trump campaign would produce it in court.

Since the presidential election was called for Joe Biden, Mr Trump has filed a flurry of lawsuits, falsely claimed that he won, and refused to engage in a transition process with Mr Biden’s team.

His legal efforts have included seeking to block the certification of votes in key battleground states Mr Biden has won.

So far, the Trump campaign has received a sceptical reception in courtrooms in several battleground states, in part because of a lack of evidence to support their claims of fraud.

The Trump campaign has been unable to attract top-tier legal talent to its cause, and at times even the lawyers it has recruited have withdrawn, with it losing two successive legal teams on a case in Pennsylvania. Ms Ellis insisted the president had an “elite strike force” of lawyers assembled to fight on his behalf.

Earlier on Thursday, the Trump campaign dropped a lawsuit in Michigan that sought to halt the certification there after days of controversy about the finalisation of votes in the state’s biggest county.

Wayne County, which includes Detroit, had on Tuesday unanimously voted to certify its results after its bipartisan board of canvassers initially deadlocked 2-2.

The following day, the two Republican members of the board signed affidavits seeking to withdraw their votes. One of the members told The Washington Post she had received a brief call from Mr Trump on Tuesday evening, but said she was not pressured by him to change her vote.

It was not clear that the affidavits would have any legal effect. A spokeswoman for Jocelyn Benson, the Michigan secretary of state, said Wayne County’s vote was still certified.

“There is no legal mechanism for them to rescind their vote. Their job is done and the next step in the process is for the Board of State Canvassers to meet and certify,” the spokeswoman said.

Mr Giuliani on Thursday said that the Trump campaign would file a lawsuit in Georgia, where a state judge has previously dismissed a Trump election case for lack of evidence, and “probably” Arizona.

He insisted that the Trump campaign would provide substantive evidence of their claims, which has been lacking so far, and urged the public to take trust in the character of the lawyers presenting the case. “There is nobody here that engages in fantasies,” Mr Giuliani said.

He was joined at the press conference by Sidney Powell, a defence lawyer who also represents Michael Flynn, Mr Trump’s former national security adviser, who talked about “the massive influence of communist money through Venezuela, Cuba, and likely China” in the US election.

She claimed the company had helped fabricate votes for Mr Biden, an allegation rejected even by the Mr Trump’s own administration.

The US Cybersecurity and Infrastructure Security Agency said last week it had the “utmost confidence in the security and integrity of our elections”.

Mr Trump fired Christopher Krebs, the Cisa director, on Tuesday. In a tweet on Thursday, Mr Krebs described the press conference as “the most dangerous 1hr 45 minutes of television in American history. And possibly the craziest.”

US presidential election 2020: You tell us