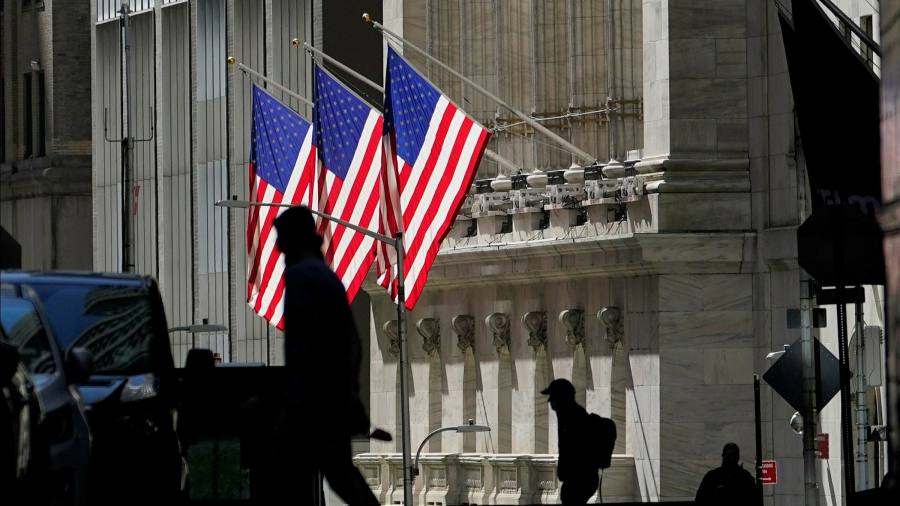 Wall Street followed European bourses sharply lower on fears that rising coronavirus infections will dampen business activity and as hopes for pre-election fiscal relief in the US dimmed.

The US S&P 500 index fell as much as 2.9 per cent in afternoon trading on Monday, before trimming its losses to trade 2.1 per cent lower, as the latest infection data undercut hopes of the virus being contained.

The sell-off was broad, with economically sensitive sectors like energy, financials and industrial groups under pressure. Travel and leisure companies sustained heavy selling.

It followed a gloomy day in Europe, in which Frankfurt’s benchmark Dax index slumped 3.7 per cent. Germany’s SAP tumbled as much as 22 per cent — its worst one-day fall since the mid-1990s — after the business software group warned that renewed lockdown measures had hit demand for its services.

“Nothing is to be gained by pretending that the pandemic and the economic pain it has caused are coming to a swift end,” said David Kelly, chief global strategist at JPMorgan Asset Management.

“Rather, investors, policymakers and the general public would all be well served by accepting the reality of both what it will take and how long it will take to recover from the pandemic recession.”

US coronavirus case numbers have surged in recent days, taking the seven-day total to a record for the pandemic. In the EU, Italy and Spain announced sweeping measures on Sunday to address a jump in new cases.

“Cases hit an all-time high in the US, hospitalisations are up, vaccines are coming but not right away, Europe is having a brutal second wave and stocks were really close to their highs,” said Jim Tierney, chief investment officer of concentrated US growth at AllianceBernstein.

With that and the election just over a week away “some pullback seems warranted,” he said, adding that the severity in the stock market sell-off “is not always rational on a daily basis”.

Wall Street’s Vix index climbed 4.8 points to 32.3, the highest level since early September. The rise in the so-called “fear gauge” signals traders are bracing for further jolts of volatility over the next month.

Energy stocks were among with worst fallers in the US and Europe, reflecting a decline in crude oil prices. Brent crude, the international benchmark, slipped more than 3 per cent to below $41 a barrel on fears that rising infections would hit global demand.

Investors shifted into Treasuries, considered to be haven assets during times of market tumult. The 10-year yield fell 0.04 percentage points to 0.8 per cent, reflecting an increase in price. The dollar advanced 0.3 per cent against a basket of six peers.

Hopes that a stimulus a deal might be passed before the November 3 election have been dimming. Steven Mnuchin, Treasury secretary and House Speaker Nancy Pelosi were due to speak on Monday afternoon but the Congressional timetable is now truncated.

White House economic adviser Larry Kudlow told CNBC that stimulus talks have slowed down, but are not ending. “The big issue here right now is we are close, but there are still important policy issues that separate us,” he said. “Right now, unfortunately the goalposts have moved and there are still some unanswered questions,” he added.

“Markets had mostly been buoyed by stimulus hopes,” said Randy Fredrick managing director at Charles Schwab. With that optimism “going away and virus cases rising the sell-off doesn’t have much to do with outcome of presidential election any more.”

Savvas Savouri, chief economist for Toscafund Asset Management, said the impasse amounted to pre-election “politicking” but said there was likely to be a deal approved after polling day.

Former subprime player claims he can now short the mortgage market for climate and Covid risks
How Much Are Taxes on an IRA Withdrawal?
Gold Retests $1,800 As Forecast Over Two Months Ago, Silver Eagle Sales Top 4 Million
2021 Would Be a Great Time to Audit the Fed
Buying a home: Why it’s harder for younger generations than their parents