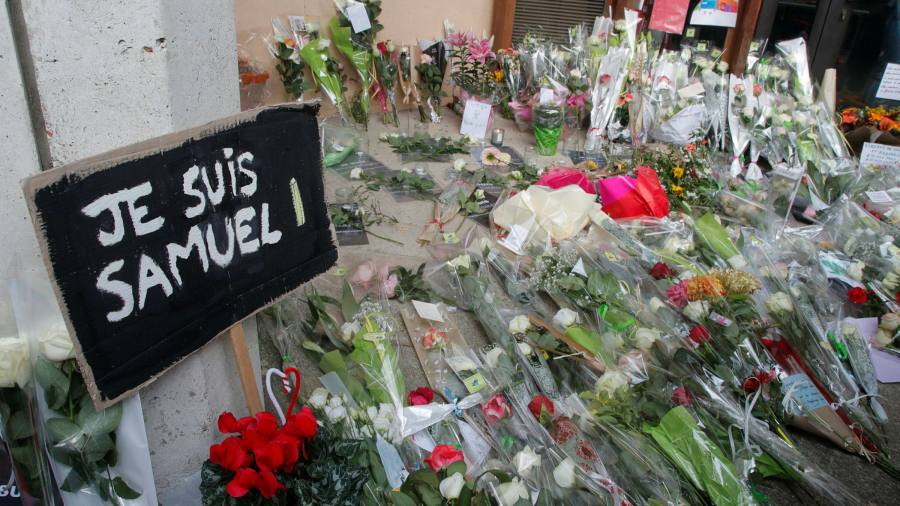 French police have detained nine people after a Chechen Muslim decapitated a history teacher near Paris on Friday for having shown his pupils satirical cartoons depicting the Prophet Mohammed in a lesson about freedom of speech.

The assassination of 47-year-old Samuel Paty in a street near the school in Conflans-Sainte-Honorine was immediately condemned by the government as an Islamist terror attack, and President Emmanuel Macron called for national unity.

“They shall not succeed. Obscurantism and the violence that goes with it will not win,” Mr Macron said outside the school hours after the murder.

On Saturday, Jean-François Ricard, the national anti-terrorist prosecutor, said the attacker, who was shot dead shortly after the attack by police, was an 18-year-old Chechen refugee born in Russia. He had been granted a 10-year permit to stay in France in March this year.

The man named as Abdoullakh Abouyezidovitch A had no criminal record and was not known to be linked to extremists although he had been accused of property damage and public violence as a minor. Four of his relatives and five others have been detained in the aftermath of the attack.

After the freedom of speech class given by Mr Paty earlier this month, the Muslim father of a pupil at the school complained and demanded that the teacher be fired. A threatening video naming Mr Paty, giving the address of the school and calling for action was published on social media.

Mr Ricard said the half-sister of the parent who complained — he is among the nine people arrested — had joined Isis in 2014 in Syria and was still being sought by the French authorities. He also said that Mr Paty’s killer had asked people outside the school to identify the teacher on Friday afternoon, and had claimed responsibility for the murder in a message on his phone.

The message on a Twitter account that has since been deleted was addressed to Mr Macron, “leader of the infidels”, and claimed the killing of “one of your hell dogs who dared to denigrate Mohammed”, according to French media.

The killing appeared to be linked to the continuing trial in Paris of 14 people accused of involvement in a terror attack on the offices of the satirical magazine Charlie Hebdo in January 2015. They are charged with helping two extremists who killed 12 people when they stormed the newsroom to take revenge for cartoons it had published of Mohammed — which Charlie Hebdo republished last month to mark the beginning of the trial.

Mr Ricard said of the latest attack: “This confirms the very high level of terrorist threat we must face.” A dagger, a knife with a 35-centimetre blade and a replica “airsoft” pistol were recovered from the street. Police said the attacker ran towards them firing his gun. He was hit by nine police bullets.

On Saturday, dozens of pupils and parents paid homage to Mr Paty outside the school, carrying white roses and signs declaring “I am a teacher” — an echo of the “I am Charlie” messages displayed worldwide after the 2015 terror attack on the offices of Charlie Hebdo.

After the start of the Charlie trial last month, two employees of a press agency were injured in an attack with a meat cleaver outside the magazine’s former offices. Zaher Hassan Mahmoud, a Pakistani man, was charged with attempted terrorist assassinations.

In a speech earlier this month in Yvelines — the department where Mr Paty was murdered — Mr Macron announced plans to curb the spread of radical Islamism with strict new controls on religious, cultural and sporting associations and a ban on home schooling.

He said 172 people were being monitored in Yvelines for suspected violent radicalisation, while 70 youths had left the department for Syria as jihadis.