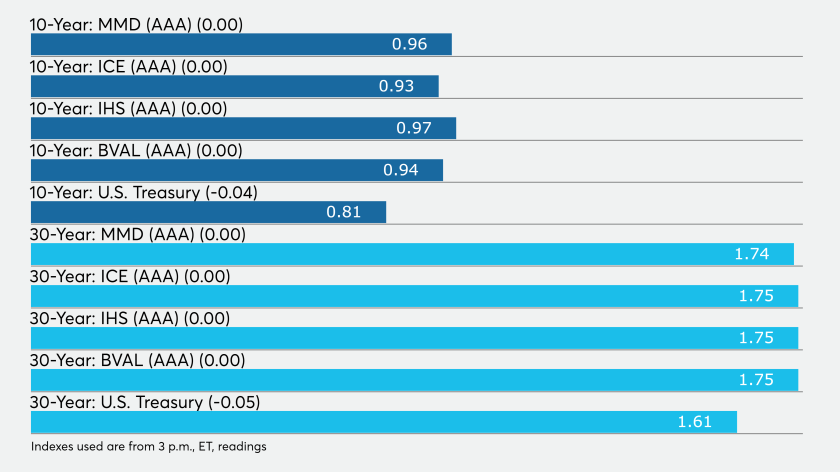 Municipal bond buyers will see a wide variety of issues come to market this week, with most of the major sectors represented, with special emphasis on education, transportation and power deals.

“It is a relatively high-grade week with a diverse basket of credits. Transportation and power are featured with deals from CTRMA and Santee Cooper,” said John Hallacy, founder of John Hallacy Consulting LLC. “Perhaps, now that rates are moving a bit, they wanted to get in before a sharp change.”

He said there were many issues for buyers to choose from this week.

“The ‘No Place Like Home Program’ bonds from California Health are also different and are social bonds as in ESG. Social is gaining traction in our market,” Hallacy said. “We have not seen a moral obligation bond in some time. The offering out of the Wisconsin Center District will also benefit from bond insurance.”

In secondary trading, municipals were little changed Monday, with yields on the AAA scales remain mostly steady across the curve.

Munis held firm as equities crumbled on worries over that more COVID-19 cases will continue to hurt the global economy while prospects for a fiscal stimulus package from Washington looked unlikely before next week’s Presidential election.

Despite ongoing uncertainty and volatility, the municipal market has kept pace with the generous slate of new issuance in recent weeks, and demand is expected to grow ahead, according to Jeffrey Lipton, managing director and head of municipal credit and market strategy, at Oppenheimer & Co.

“We expect taxables to maintain a meaningful presence throughout the balance of the year, likely surpassing 30% of aggregate issuance, Lipton said.

“All things considered, the muni market is behaving rationally and efficiently — albeit we are seeing disproportionate participation from the institutional investor with retail keeping to the sidelines ahead of Election Day,” Lipton said.

“As market participants strategize their investment thesis once the election results are in, public health policy, infrastructure initiatives, and potential individual and corporate tax adjustments will frame the narrative,” Lipton said.

While cash continues to be put to work, he said, the market may see some flow volatility once the Presidential election is over.

He said this outlook is not purely driven by politics, but also by elevating anxiety brought about by rising COVID-19 caseloads.

“Not only are investors thinking about the balance of power in Washington D.C. come next week, they are also focused on the timeline for mitigating therapeutics and a safe and efficacious vaccine,” he continued. While prospects for passing the next wave of congressional relief ahead of Nov. 3 are quickly fading, any hopes that state and local governments will receive much-needed assistance are likely to carry into a post-election lame-duck session of Congress, according to Lipton.

Higher taxes, particularly on the corporate side, he said, could likely boost demand for tax-exemption, resulting in a potential shift towards tighter spreads.

Credit, on the other hand, will remain influenced by the progress of economic recovery, he added.

“While we can expect to see higher instances of impairment, the outlook for overall credit quality remains favorable with the vast majority of muni issuers displaying resiliency,” Lipton said.

Primary market
This week’s supply is estimated at $15.8 billion in a calendar composed or $12.3 billion of negotiated deals and $3.5 billion of competitive sales.

The bonds will be priced for institutions on Wednesday after a second day of retail orders. Also Wednesday, the TFA plans to competitively sell about $200 million of taxable fixed-rate bonds.

Last Thursday, New York State Comptroller Thomas DiNapoli said the securities industry saw its pre-tax profits rise 82% in the first six months of 2020. Wall Street is the biggest contributor to NYC’s economy, accounting for about 17% of all economic activity. Its estimated contribution of $3.9 billion to the city’s total tax collections in the fiscal year ending June 30 was down 5%, reflecting a decline in jobs and capital gains.

On Tuesday, Citigroup is set to price the California Health Facilities Financing Authority’s (Aa3/AA-/AA-/NR) $450 million of Series 2020 taxable senior revenue bonds for the “No Place Like Home” program.

The South Carolina Public Service Authority is coming to market with $652.35 million of bonds for Santee Cooper in two issues on Tuesday.

In the competitive arena on Tuesday, Hudson County, N.J., is selling $223.086 million of unlimited tax general improvement bonds. NW Financial Group is the financial advisor; Wilentz Goldman is the bond counsel. Proceeds will be used to refund on a current basis part of 2019 bond anticipation note issue and to provide for capital improvements and equipment.

The Evergreen School District No. 114, Wash., is selling $230.55 million of unlimited tax GOS backed by the Washington State School District Credit Enhancement Program. The financial advisor is the Educational Services District 112 of Vancouver, Wash. Pacifica Law Group is the bond counsel. Proceeds will be used for capital improvements.

Secondary market
An active primary market might be grabbing the headlines, but FHN Financial said data from the Municipal Securities Rulemaking Board show that secondary commitments are not falling by the wayside.

“Recent activity suggests secondary trading is 50%-60% of totally daily volume. Steady syndicate levels are giving bid-sides more confidence to hold generic AAA benchmark curves to a tight range,” FHN said in a weekly market report. “There is some push to force natural AAA names in the 10-year area behind 1% with more concession — a welcome development from what was a long-run trade between 0.70% and 0.80%.”

Trading in sectors that have been more adversely affected with lockdown effects such as New York City credits, large-hub airports and healthcare systems, are all showing relaxed yield relationships that area creating new-found flows, FHN said. Syndicate pricings that are among the heaviest in memory indicate a comfort level with wider ranges, the report said.

Last week, the most traded muni sector was industrial development followed by education and utilities, according to IHS Markit.

Hopes for a stimulus drove up yields last week, but faded to disappointment by Friday, Wells Fargo said in a Monday market note.

Wells Fargo added that although higher-grade munis underperformed on the week, AAAs are still outperforming BBBs by 312 basis points year to date and would likely to continue to do so without a stimulus deal.

Treasuries were stronger as stock prices traded down.