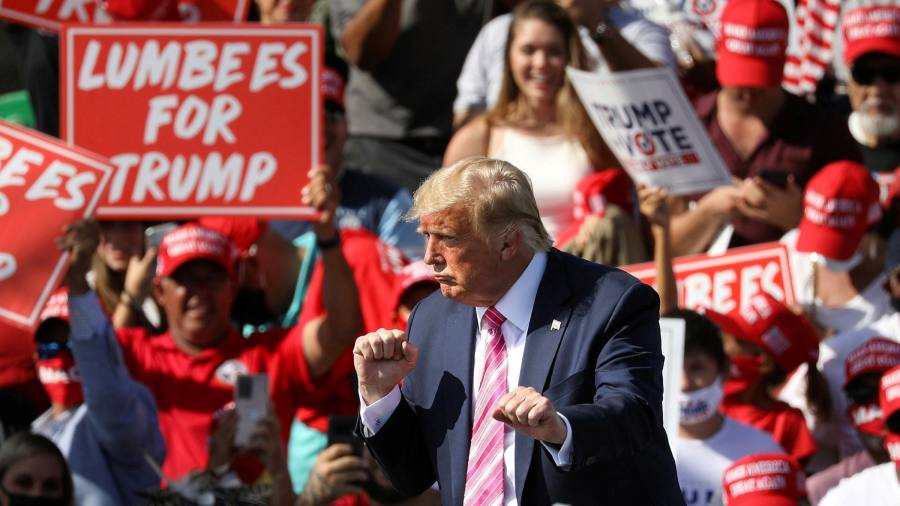 US states were grappling with surges in coronavirus cases that threatened to overwhelm hospitals as Donald Trump and Joe Biden staged competing campaign rallies on Saturday with just 10 days to go until the presidential election.

Mr Trump was due to visit three battleground states — North Carolina, Ohio and Wisconsin — on Saturday alone as he tries to catch up with his Democratic rival, who is leading in national polls by 8.7 percentage points, according to Financial Times analysis of Real Clear Politics data.

At his first rally in Lumberton North Carolina, Mr Trump insisted the US was “rounding the turn” on coronavirus, despite several states posting record one-day increases in new Covid-19 infections on Friday. These included the critical swing states of Ohio, Pennsylvania and Wisconsin.

“We are doing great. Our numbers are incredible,” Mr Trump said at the rally on Saturday afternoon. Mr Trump blamed the media for focusing on the infection numbers, which he said were the result of widespread testing.

“Americans are tired of all this negativity.”

More than 200,000 Americans have died from Covid-19 — a higher total than any other country — and a record 83,010 new cases were reported on Friday alone, according to the Covid Tracking Project.

Mr Biden, the Democratic challenger, on Saturday toured Pennsylvania, a swing state where Mr Trump beat Hillary Clinton four years ago by a razor-thin margin of some 44,000 votes.

“It’s go-time, folks. It’s game day,” Mr Biden told a drive-in rally in Bucks county, just north of Philadelphia. “We have 10 days left. And it may come down to Pennsylvania. The choice has never been clearer and the stakes have never been higher.”

The former vice-president, who has sought to make November’s election a referendum on Mr Trump’s handling of the coronavirus pandemic, tore into the president’s public health record.

“Yesterday, while he’s telling everything’s all right, we saw the highest number — 85,000 new cases in one day — since this pandemic began,” Mr Biden said. He has said that if he were president, he would mandate mask-wearing in federal buildings and in interstate travel, and encourage state governors and local officials to do the same in their jurisdictions.

Amid public health concerns about voting on election day, at least 56m Americans have already voted early, either by mail or in-person, according to the University of Florida’s US Elections Project.

The president told reporters that it was a “very secure vote” and everything was perfect”, adding: “I voted for a guy named Trump.”

Taliban rockets target presidential palace in Kabul
Silver price in danger of 20% drop on worst weekly close in 3 months – InvestingCube
What Millennials Really Think About Social Security – And Why They Might Not Be Entirely Wrong
Government Spending is Out of Control
A simple framework for making investments that are good for your clients, your team, and the world