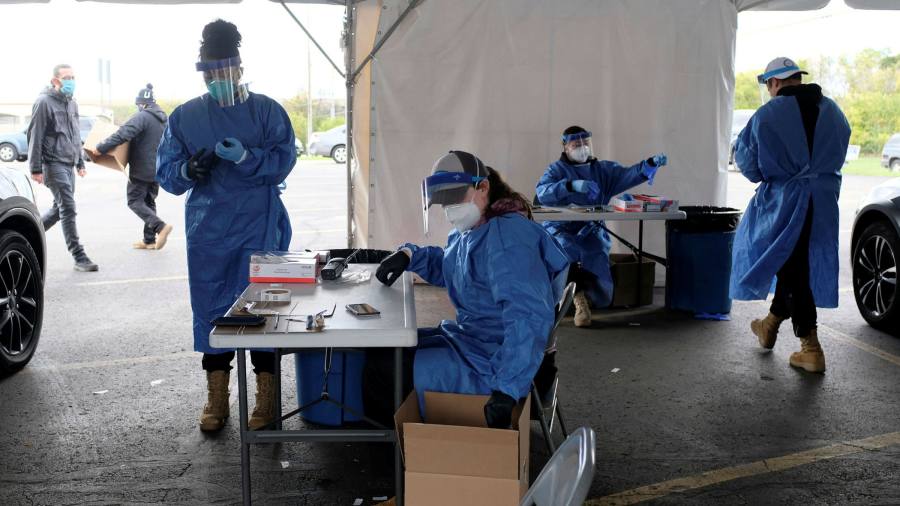 The US’s third big coronavirus outbreak showed no sign of abating on Friday, with hard-hit states like Wisconsin, Minnesota and Indiana reporting record one-day increases that pushed the nation’s overall tally above 8m.

Although the new spate of cases has been concentrated in the Midwest and other northern states that are beginning to move into cold and flu season, other states like North Carolina are also posting record jumps.

The US reported a further 68,124 coronavirus cases, the biggest one-day increase since July 30, according to Covid Tracking Project data. Deaths rose by 877, down from Thursday’s one-week high of 951.

The US has confirmed more coronavirus cases than any other country since the start of the pandemic, at just over 8m.

Wisconsin’s tally of 3,861 cases recorded over the past 24 hours was the second record jump in infections in a row, having hit a record of 3,747 on Thursday. Minnesota and Indiana also reported one-day records of 2,297 and 2,328, respectively, while Ohio’s jump of 2,148 infections sat just 30 cases shy of its record.

Illinois reported 4,554 new cases, up from 4,015 on Thursday and 3,117 a week ago. Although the state recorded more cases once before, that one-day spike in early September was due to reporting delays earlier in the month.

The new rise in infections comes at the same time President Donald Trump has tried to convince voters in key battleground states that the pandemic is under control amid multiple polls showing voters are turning against him because of his handling of outbreak.

“We are rounding the turn,” Mr Trump told a rally in Fort Myers, Florida, on Friday. “We are prevailing, it’s amazing what’s happening.”

Joe Biden, his Democratic rival, continued to hit Mr Trump on the pandemic, telling a campaign event outside the Michigan city of Detroit that coronavirus was “not disappearing” and arguing many of the Covid-related deaths were “avoidable”. 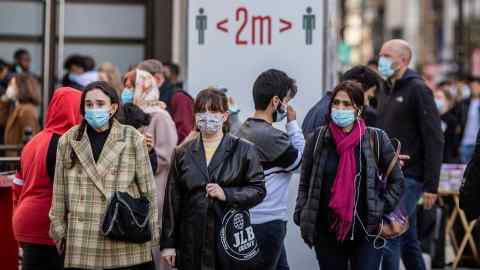 “If projections — pray God they’re not right — but if they are right, in the next several months, there will be over 200,000 additional deaths,” Mr Biden said. “That will be in one year, 400,000 Americans will have died. That’s more than lost in all of World War II. World War II was four years.”

The Midwest has established itself as the new hotspot for coronavirus in the US. In the past three days, all 12 Midwest states reported their highest average daily case rates; more than 20 states nationwide have set single-day records for new cases this month.

Wisconsin’s tally is particularly dire, averaging more than 3,000 cases a day over the past week. Only eight other states — all with larger populations — have ever averaged more than that threshold of cases a day over a seven-day period, according to Financial Times analysis of Covid Tracking Project data.

Wisconsin’s health department attributed 21 new deaths to coronavirus, up from 18 on Thursday and compared with 16 a week ago. In Illinois, authorities reported 38 deaths, down from a nearly-four-month high of 53 on Thursday.

North Carolina reported 2,684 new cases, the second day in a row of a record increase. Mandy Cohen, the state’s health secretary, warned on Thursday that while the state overall has “sufficient hospital capacity, some of our smaller hospitals are feeling the strain already”.