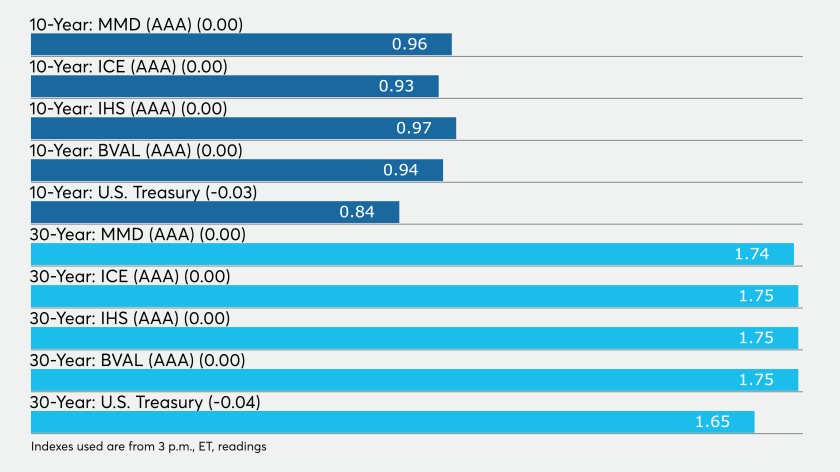 Municipal bond buyers will see large deals from California, New York and Texas issuers in a calendar that totals almost $16 billion. One again taxable issues will be making a strong showing throughout the week.

Ahead of the supply set to thunder into the municipal market, there was a mixed tone on the buy side Friday.

“It is very quiet in the secondary market as the municipal and Treasury markets are reacting with a positive tone to the equity market,” said Howard Mackey, managing director at NW Financial in Hoboken, N.J.

Besides municipals backing up in sympathy with Treasuries, spreads have widened a bit with the growing visible supply on the horizon, according to Mackey. That is leaving to continued heavy demand in specialty states, such as New Jersey and Pennsylvania, where supply is limited. Albeit, most of that demand is institutionally driven, he noted.

“Inflows are still positive and we still have a fair amount of cash and demand” from the separately managed accounts the firm oversees, Mackey said. “We haven’t seen much individual demand from retail,” as mom and pop investors are avoiding market volatility and uncertainty, he added.

He said next week might be the last window of opportunity for sizable volume ahead of the upcoming election.

“I wouldn’t be surprised if the market activity and demand starts falling off a little and investors get more concerned as they weigh things out until after the election,” he said.

In secondary trading, municipals were little changed Friday, with yields on the AAA scales remain mostly steady ahead of the continuing supply surge.

Analysts at IFR Markets said the U.S. economy faces risks until an effective vaccine is available to the population.

“Until the pandemic is brought under control the risks to the economy are more towards stagflation. Some sectors (housing, retail sales, digital, WFH) are unfettered by the virus and the economy’s inclination is to rush forward and get back to business as usual,” IFR said.

“Meanwhile, both monetary and fiscal policymakers’ inclinations tend overdo it regarding getting the economy and its inflation expectations. The Fed intends to throw fuel on the economic/inflation fire until well after a full economic recovery is underway,” IFR said. “As the Fed is out of ammo, they have become forceful advocates for aggressive fiscal stimulus spending.”

Looking ahead, the Presidential contest may have some impact upon the municipal bond market, says Refinitiv MMD Senior Market Strategist Daniel Berger.

“This is noteworthy should there be a change in Washington. First, there might be greater relief for the high-profile, financially stressed states. The second notable impact is that a new administration that might impose higher taxes leading to a greater demand for tax-exempt municipal bonds,” he said. “The potentially improved credit outlook combined with this increased demand could lead to lower interest rates for municipal bonds.”

Primary market
IHS Ipreo estimates volume for the upcoming week at $15.8 billion. The calendar is composed of $12.3 billion of negotiated deals and $3.5 billion of competitive sales. Refinitiv estimates the total consists of $10 billion of tax-exempts and $5.8 billion of taxables. The year-to-date weekly volume average is $6.2 billion.

On the calendar, education deals from the Golden State issuers take the top spots.

The California State Public Works Board (Aa3/A+/AA-/NR) is coming to market with $508.3 million of Series 2021A lease revenue refunding forward delivery bonds for various projects. Wells Fargo Securities is set to price the bonds on Wednesday.

The California Health Facilities Financing Authority (Aa3/AA-/AA-/NR) is offering $450 million of Series 2020 taxable senior revenue bonds for the No Place Like Home program. Citigroup is set to price the bonds on Tuesday.

Issuers from New York also have their place on the new-issue calendar.

The New York City Transitional Finance Authority will hit the market with about $1.1 billion of future tax-secured subordinate bonds. The deal is comprised of $924.215 million of tax-exempt fixed-rate bonds and $200 million of taxable fixed-rates.

Book-running lead manager Ramirez & Co. is expected to price the tax-exempts on Wednesday after a two-day retail order period. The TFA also plans to competitively sell the taxable fixed-rate bonds on Wednesday.

The New York Metropolitan Transportation Authority will be issuing about $258 million of climate bond certified Series 2020E transportation revenue refunding bonds. JPMorgan is set to price the bonds on Thursday.

“Given the uncertain policy landscape, we do not have the means to provide said forecast with conviction,” Citi said, adding that if this amount is reached it would set a new annual record for municipal supply.

City said if the Federal Reserve’s Municipal Liquidity Facility remains operational beyond 2020, issuance through the MLF would be counted in its estimates.

Net issuance is estimated at about $175 billion, of which a majority woukd come from taxable supply, Citi said.

“We stress that this is just a preliminary estimate and we will be able to finalize these numbers only after the outcome of the upcoming U.S. Presidential and Senate elections,” the report said. “Thus, we could revise these numbers upwards (possible) or downwards (a lot less likely).”

But Citi added that in any scenario, it is convinced 2021 will see a robust supply slate.

“Municipal issuance will be utilized by public agencies and state and local governments to rebuild their respective budgets and economies (and infrastructure) as the nation recovers from the pandemic,” Citi said. “The $3 trillion U.S. infrastructure upgrade, needless to say, will be financed via the municipal market.

“We also believe that the renewed focus on ESG will incentivize issuers to fund social projects via the municipal market,” Citi said.

Secondary market
Tobacco bonds were trading about three basis points weaker from last Friday to Thursday, IHS said. Reviewing trades and quotes, IHS said the Buckeye Class 2B2 5s of 2055 N/R with a 2030 call date priced wider at $107, down from $107.5.

The most active bond types traded this week were revenue bonds, followed by GOs and taxable, according to IHS Markit.

Bond Buyer indexes move higher
The weekly average yield to maturity of the Bond Buyer Municipal Bond Index, which is based on 40 long-term bond prices, rose one basis point to 3.63% from 3.62% in the previous week.