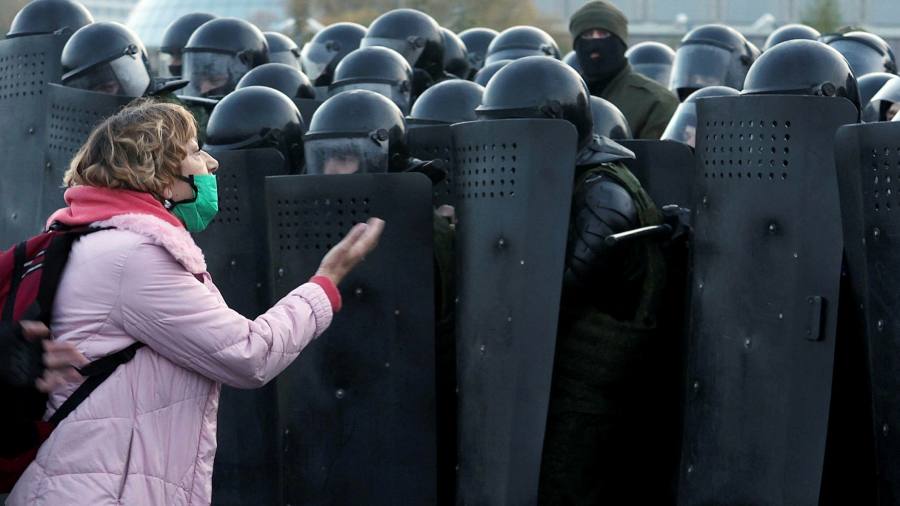 Belarusian authorities launched a brutal crackdown on Sunday evening on protesters who took to the streets for an 11th straight weekend to demand the departure of strongman leader, Alexander Lukashenko.

In the capital Minsk, riot police used stun grenades to disperse protesters, who hard turned out in their tens of thousands to protest against Mr Lukashenko. The president has been under intense pressure since claiming victory in a deeply flawed election on August 9.

Footage shared by Belarusian media showed streets in Minsk filling with smoke and reverberating to the sound of explosions, which also set car alarms blaring. Police in body armour chased protesters through streets and courtyards, and detained those they could catch.

A list of people detained, compiled by the rights group Viasna, had 224 names on it by Sunday evening, in cities ranging from Minsk, to Brest and Grodno in the west and Mogilev and Gomel in the east.

The latest round of protests came ahead of a deadline at midnight on Sunday set by opposition leaders for Mr Lukashenko to step down, or face a nationwide strike on Monday. If successful, a labour stoppage would add to the mounting strains on Belarus’s already stagnating economy.

We demand that: 1. Lukashenko must go. 2. [The] violence has to stop. 3. Political prisoners must be released

Svetlana Tikhanovskaya, the main opposition candidate in the August election, who was forced into exile in Lithuania under pressure from Belarus’s security services, urged law enforcement officials to “express solidarity” with the protesters.

“We demand that: 1. Lukashenko must go. 2. [The] violence has to stop. 3. Political prisoners must be released,” she wrote on Twitter.

“Unless authorities deliver, Belarusians will start a national strike tomorrow on October 26th. Together we are stronger than any regime and we will return the law to Belarus.”

The protests are the most sustained and serious challenge that Mr Lukashenko, a 66-year-old former collective farm boss, has faced during his 26-year authoritarian rule in the former Soviet state.

Since the first demonstrations erupted after he claimed a landslide victory over Ms Tikhanovskaya, he has tried a variety of ways to subdue them.

In the days immediately after the election, security forces launched a savage crackdown on protesters, beating and detaining thousands. They only backed off when the brutality appeared to galvanise the demonstrations.

However, the two days later ostensible olive branch was accompanied by a threat that police could use live rounds against protesters. Opposition leaders dismissed the episode as a sham.

“You can’t have dialogue in a prison cell,” Ms Tikhanovskaya said at the time.