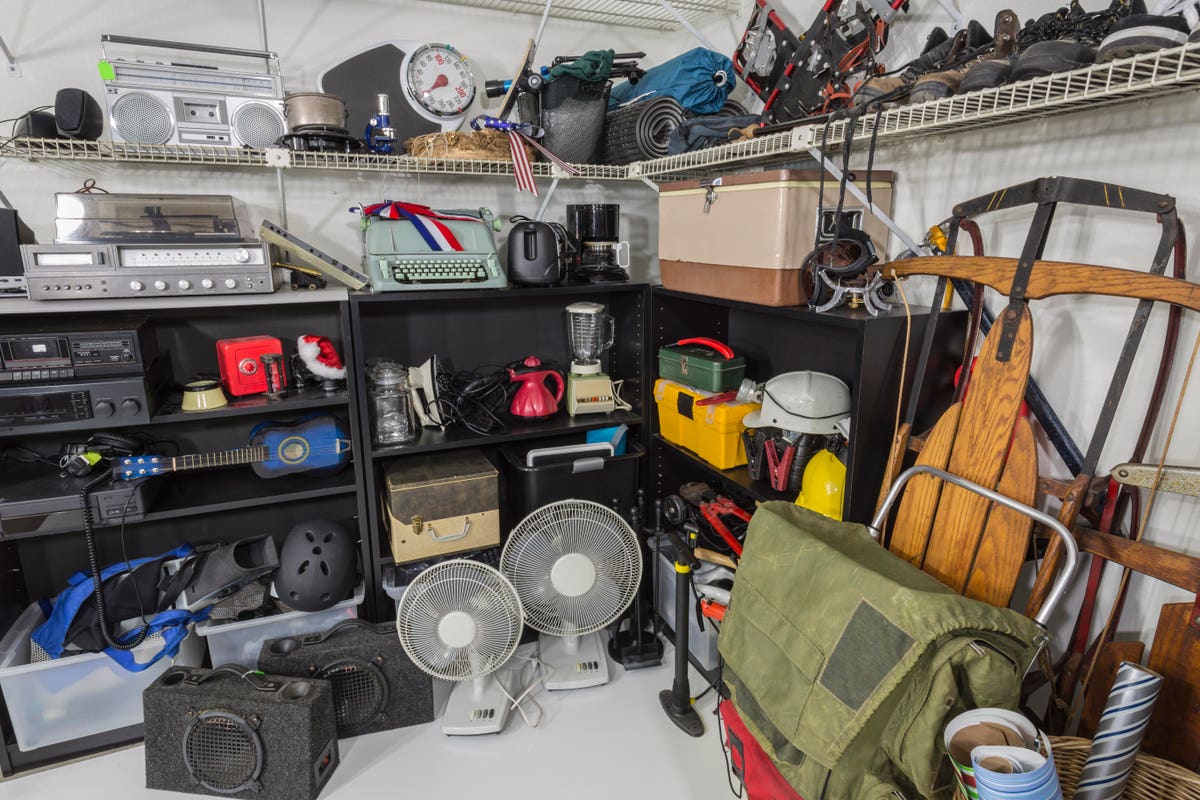 Ever since I wrote the viral 2017 Next Avenue post, “Sorry, Nobody Wants Your Parents’ Stuff,” I’ve been a little obsessed with Americans’ love/hate relationship with their possessions and downsizing. So, I was fascinated to read University of Kansas sociology and gerontology professor David J. Ekerdt’s new book, Downsizing: Confronting Our Possessions in Later Life, and to have a chance to interview him about it.

Ekerdt has actually conducted exhaustive interviews with Americans over 50 about their experiences shedding their stuff.

In 2002-2003, he and his researchers spoke with 38 people age 60 and older who’d moved in the previous year within, or to, the region around Lawrence, Kansas, and Kansas City, Mo. They also interviewed 98 people 60+ in the area around Detroit and again in Kansas and Missouri between 2008 and 2013. And in 2010, they put questions about relocation and possessions into the mammoth University of Michigan Health and Retirement Study (HRS), surveying 1,814 Americans age 50 and older.

One of the most revealing findings from the HRS questionnaire: 61% of people in their 60s said they felt they had more things than they needed. As Ekerdt writes in Downsizing, older Americans have a “predicament with possessions.”

“People talked about waking up in the morning and making more lists and their sleep being disrupted as the deadline was bearing down on them.”

“I don’t want to scold people,” he told me. “I think it’s a given that people accumulate things for all sorts of reasons. It’s more convenient to do nothing [about that] than it is to do something.

Here’s the rest of my interview with the king of “stuff” research:

Next Avenue: How and why did you become so interested in the subject of downsizing and possessions?

David J. Ekerdt: I have been studying over my career how people make transitions in later life and everything it entailed, but also the way people get ready for the future. Thinking of the residential relocation question, that will almost always entail people moving to smaller houses, which means they have to reduce by perhaps half or more the quantity of the possessions they have. And the further forward you go in life, the more difficult this might become.

So, we sought funding from NIH [National Institutes of Health) to learn how people went about doing this exactly and what we could learn to help inform people.

What surprised you from your surveys?

People often described downsizing as being hard work and drudgery.

And it’s quite complicated; it’s a cognitive task you have to think through, with endless details. You have to make lists. People talked about waking up in the morning and making more lists and their sleep being disrupted as the deadline was bearing down on them. That’s how stress tends to express itself.

And it’s emotional: you have to stop and consider whether you will still want to have things and protect them, or try to place them with relatives. So, it’s a social task.

And how did people say they felt after they downsized?

They had relief. Their accomplishment was a form of empowerment.

You say that some people use the ‘magical thinking’ approach to downsizing. What do you mean?

This is when people are funny. One person said: ‘I just wished at one point there could be a fire to take care of all of these things.’

You said you found a lot of ‘divestment inertia.’ What do you mean by that?

It’s typical for people to do less and less about their possessions as they move into their seventies, eighties and nineties. About half of people in their seventies have difficulty stooping and crouching and kneeling. By the time they’re eighty, almost two-thirds do. Imagine cleaning out a house without stooping, crouching and kneeling. And over half of people who are eighty have difficulty lifting and carrying something as heavy as ten pounds. So the inertia is not surprising.

What do you think were the most important and interesting findings from the surveys you conducted?

I think I’d go right to one of the major things: There is a sequence of strategies people use once they embark on downsizing and have to decide what they will keep.

If you need to move, we found the most common length of time for this downsizing is about six weeks to two months. In that period of time, the work you have to do to give things away and sell them is not going to move much material out of the house unless you turn the selling over to someone like an estate seller.

Yard Sales: A Lot of Work

How did selling items, yard sales and estate sales work out for the downsizers?

About a quarter of the people did what I call opportunity selling. That’s like when a neighbor hears you’re moving and buys your lawn mower.

Half of the people tried more engagement — with yard sales or church sales. Everyone will tell you that a yard sale is a lot of work.

Some went with delegated sales where an auctioneer or an auction house takes everything away and removes your identity from everything.

“They also said it wasn’t about the money. It was ‘We got rid of it.’ That word ‘rid’ is always mentioned.”

Some tried estate sales and they were pleased sometimes. But you have to understand the ground rules. The seller might mix your possessions in with others. Or the people found the estate sales person would hold the sale in the middle of the week, rather than on a Saturday or a Sunday when the people downsizing thought would get more traffic.

Do people get much money when they sell their things?

The first person we interviewed sold everything for twenty-eight thousand dollars and she even made her own granddaughter, who was interested in the grandfather clock, come to the sale. But most people don’t realize that much money.

Were they disappointed about that?

Mostly they said ‘It was nice that we got something, but it wasn’t that much.’ They also said it wasn’t about the money. It was ‘We got rid of it.’ That word ‘rid’ is always mentioned.

One of the problems with selling things is that people have almost no idea of the prices people will pay for them and they are continually disappointed by the prices they get. TV shows like “Antiques Roadshow” are tempting to believe in.

The Good Feeling From Donating Stuff

People we surveyed tried to make batch donations at large agencies like Goodwill or Salvation Army. But they also tried to place things with perhaps a woman’s shelter for their linens and bedding and utensils. When they were done donating to the shelter, they felt good about having done that.

Some of the charities are closed to things they will accept. Some offer to pick things up at your house, but you have to be specific about what they’re picking up. You can’t unload the attic on them.

Some people in our studies found that charities would not pick up in their neighborhood.

Why do people compress their downsizing into a short period of time? And what’s their advice to others?

When we asked people in our study for their advice to others, they all said: Don’t wait. Start early. Do it while you still can. I would second that.

They also said: Get help and pay for it if you have to. If you don’t, you will be in for months of pretty hard work. It will be pretty laborious.

When to Start Getting Rid of Your Possessions

Does it ever make sense to delay your downsizing of your possessions?

There’s a good reason to wait until you know what your destination is because until then you don’t know what’s going to fit and what you’re going to need.

If you will have a yard, you will want to retain your gardening supplies and your lawnmower. But if not, then all that material can be released. If you won’t have much space and you now have bookshelves, you’ll have to downsize your books.

Do people delay the downsizing because they’re sentimental about their possessions?

That would be another reason to hold back. There are two main reasons we have something: either it’s useful or it symbolizes something. Your mother’s cookbook might be less useful than your potato peeler, but it symbolizes your mother.

To release these symbolic things, it’s a confrontation with yourself: What kind of person am I going to be in the future?

A number of the women we talked to said that when they moved, they brought service for four or six plates. That was them measuring the size of what their hospitality would be in the future.

Our Stuff, Our Selves

How did downsizing, or a failure to downsize, relate to identity?

Possessions are an extension of ourselves. In the book, there’s a woman in her basement going through boxes, finding trophies her children earned in grade school. Being a mother was in those things. And that’s why it takes a great amount of courage to surrender these things and decide you’re going to move forward.

You also found what you called a strong form of ‘intentional placement’ for unloading possessions, which you called a ‘safe passage.’ What is that?

Safe passage goes back to olden days when there were bandits in the countryside and someone would accompany you from one border to another. With downsizing, people are intentionally trying to give their possessions a safe passage into the future to people who would value them and use them and respect them as they did.

You write that downsizing is often easier for affluent people than for poorer people. Why?

Affluent people have resources to obtain help to hire people to help them move and sell things.

And people of modest means may not have as much discretion about when they will move. One of the strategies some people use when moving is they move first and then settle things back at the house they left after the move. If you have a modest income, you might not be able to pay two mortgages or rents or a double set of utilities for months. When a slot is open for an apartment, you’ve got to do it now.

The Pandemic and Downsizing

How is the pandemic affecting downsizing?

I was talking to a senior move manager who helps people do it and she said people are still moving, but it’s harder to do face-to-face transactions.

In your study, did you find the adult kids wanted their parents’ possessions?

One thing we were hearing was: ‘We offered things to our kids and they didn’t want much of anything.’ This is a staple of popular media. It’s kind of unflattering to both generations; that the younger people are selfish and the older people are tone deaf.

There are good reasons for refusing parents’ possessions. They can be out of style or worn out. And the children are visitors now, so they’re less familiar with what their parents’ things mean.

Also, it puts an obligation on your children to archive things, so you won’t come over and say: ‘Where are those teacups I gave you? I don’t see them out there.’

Anyone who is moving in their seventies or eighties — their adult children have households that are fully stocked and they might not need anything else.

What is your advice to the adult children whose parents do want them to take things?

Take them — and take some more. Because the true gift is the receiving of things.

Be glad your parents are letting go of things and do them a favor of accepting their books or tools or a piece of furniture if you can, instead of saying: ‘That’s not my taste.’ Affirm the giver with open arms.