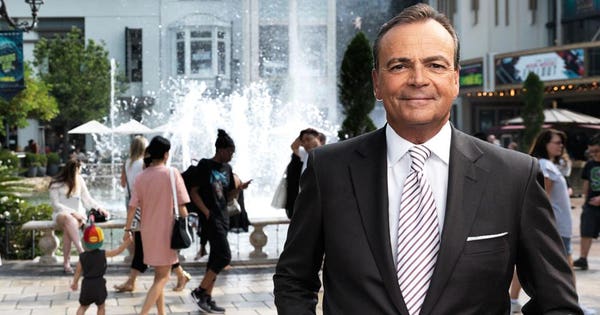 Billionaire real estate developer Rick Caruso finds himself in an uncomfortable position this week. The University of Southern California, where Caruso is chair of the board of trustees, is in the spotlight as part of a college admissions scandal involving charges that wealthy parents resorted to bribery and cheating to get their children into college.

In a twist that seems pulled from a movie script, the daughter of actress Lori Loughlin was aboard Caruso’s 215-foot yacht when the news broke. Lori Loughlin was one of more than 50 people charged by federal investigators Tuesday.

“My daughter and a group of students left for spring break prior to the government’s announcement yesterday,” Caruso told gossip site TMZ, where the report originally appeared on Wednesday. “Once we became aware of the investigation, the young woman decided it would be in her best interests to return home.” Both Loughlin and Caruso’s daughters are students at USC, which has not been charged with wrongdoing.

A representative for Caruso confirmed the story but declined to comment further citing Caruso’s desire to protect his children.

On Tuesday USC released a brief but strongly worded statement from Caruso: “The charges filed today against employees of USC are disturbing and the alleged activity is absolutely wrong. I am saddened that these people would abuse their positions of trust and, as the government has alleged, victimize USC in the process. There is no option other than zero tolerance for this type of behavior. As a result, USC has fired the alleged wrongdoers.”

Caruso’s connections to USC run deep. His father Hank attended the school, and Caruso himself graduated in 1980 with a business degree. All four of his children have attended the university, including his youngest, who is currently a sophomore and reportedly friends with Loughlin’s daughter Olivia Jade.

The Caruso name appears on at least two campus buildings: the USC Caruso Catholic Center and the USC Tina & Rick Caruso Department of Otolaryngology. Caruso and his wife Tina have donated or pledged $40 million to his alma mater.

This is the second major scandal Caruso has had to contend with at USC. A longtime board member, Caruso only took over as chair in May to lead an ongoing investigation into the misconduct and reporting failures that allegedly occurred at the USC student health center. “My fellow Trustees and I also pledged to ensure a cultural shift within the University that places the safety of students and patients as our top priority,” he wrote in his latest update to the community in October.

He was tapped in part because of his previous experience with controversy as president of the Los Angeles Police Commission. In that role he helped overhaul the LAPD’s disciplinary procedures and recruited William Bratton as police chief.

Caruso made his fortune, which Forbes pegs at $4 billion, by developing open-air shopping centers in and around Los Angeles. The Grove, his best-known property, welcomes about 20 million visitors each year, more than the Great Wall of China or Disneyland. He recently opened a new retail development in L.A.’s Pacific Palisades neighborhood and a boutique hotel in Montecito, California, near Santa Barbara.

He often entertains on his yacht, Invictus, which is named for William Ernest Henley’s 1875 poem—“I am the master of my fate. I am the captain of my soul.”

For more on Caruso and his real estate business, read our 2018 cover profile.