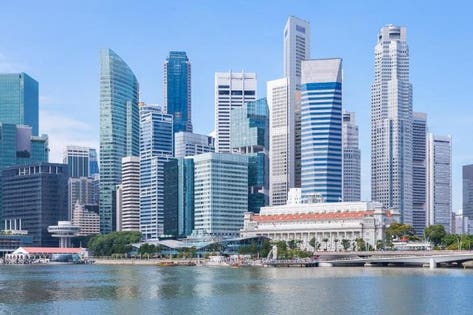 Marina Bay and Financial district in Singapore. If your city is a tech hub, a finance hub, or known for being an epicenter of high culture, media and entertainment, then real estate prices are likely to be prohibitive for the vast majority of the city’s employees. (Getty Images)Getty

Face it, if your city is home to high culture, high finance, or a national hub for media and entertainment, it is going to require a six-figure salary to buy a house and maybe one very close to that just to rent one.

According to a survey on the world’s costlier cities, released on Monday by The Economist Intelligence Unit (EIU), Singapore, Paris and Hong Kong are top three most expensive places to live. The two most expensive U.S. cities come in the bottom half of the richest 10 urban areas, with New York (No. 7) edging out Los Angeles (No. 10). Both cities did move up more a few notches in the cost of living index, however, with New York going up six spots on the list and LA going up four. It’s probably not a list that anyone but a real estate agent and existing homeowners care to see their cities on. Newcomers and American dreamers in these global cities will need to some creative financing to be able to afford properties that easily go for over $1 million.

The top 10 cities are divided between Asia and Europe. Singapore is the only city in the top 10 that has maintained its ranking from the previous year.

The Worldwide Cost of Living survey compares the costs of 160 products and services in 133 world cities. Products include the cost of food, clothing, household supplies, rent, public transportation, utility bills, private schools, recreational and even how much it costs for maids and gardeners; which is increasingly becoming standard in mega-cities like these. The survey is designed mainly for multinational corporations looking to price the costs of living for expats employed in overseas offices.

A stronger dollar last year meant that cities in the U.S. became more expensive for professional globe-trotters. Both New York and LA’s climb in cost represent a sharp increase since 2013 when New York and Los Angeles were not even in the top 10. They were tied for 39th place.

The survey uses New York City as its baseline. So New York’s cost of living is 100. The top three are all at 107, putting them fairly higher than New York.

The highest climbers on the U.S. side were San Francisco (to 25 overall from 37 last year), Houston (30th from 41st), Seattle (38th from 46th) and Detroit and Cleveland (both at 67, up from 75).  Keeping in mind the target audience for this survey, what makes New York and LA more costly is maid service and things like gasoline are more expensive than in other parts of the world.

Global cities are getting cheaper, but there’s a reason for that.

The global cost of living has fallen to 69%, down from 73% last year — meaning the cost of living baseline of 100 is 69 instead of 73 on average for the 133 cities on the EIUs list. Five years ago, the average cost of living index was 82% and 10 years ago it was 89%. One reason for the cost of living averages to decline overall is because cities in Latin America, as well as costs of living in Turkey, have fallen at a steeper rate than prices have risen in world-class cities.

The “converging costs in traditionally more expensive cities like Copenhagen, Seoul, New York, and Los Angeles is a testament to globalization the similarity of tastes and shopping patterns,” says Roxana Slavcheva, the editor of the survey.

Pagoda Street in Chinatown, Singapore. Housing here is as expensive as it is in Tribeca. Overall, Singapore’s cost of living is higher than that of any major American city.(Getty Images)Getty

More remarkable is the widening gap between North American and South American cities. Buenos Aires, Caracas, São Paulo, and Rio de Janeiro have all tumbled in the rankings due to government subsidy cuts to things like public transportation and electricity, to high inflation. Brazil is just coming out of a two-year recession. Argentina is currently in one. And Venezuela is in its third year of an economic depression.

A quick comparison of real estate of similar size and location shows that Tribeca, New York can be cheaper than the Chinatown district of Singapore. Based on sample listings in the area, a two bedroom, 1,100 square foot condo goes for around $2.02 million in Chinatown’s Altex Tian luxury residential tower. A similarly sized property at The Leonard in Tribeca with two bedrooms and two baths will run you a cool $2.3 million.

The EIU says they look at 50,000 individual prices in each survey. The survey is conducted each March and September. Researchers tour a range of consumer stores from staples to the superfluous, from mid-priced stores to specialty outlets. Prices are converted into dollars using current exchange rates and are weighted in order to achieve comparative indexes.