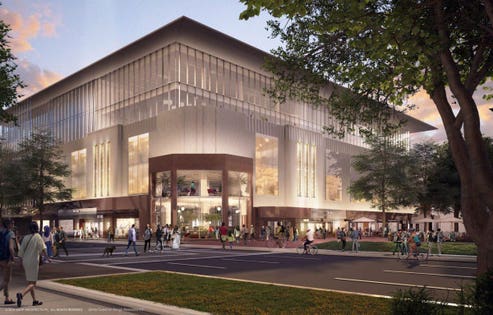 Innovation in Houston will have a centerpiece in The Ion, part of the emerging innovation corridor being cultivated by a public-private initiative to grow the city’s entrepreneurial ecosystem.

A building, a concept and a mindset, “The Ion” in Houston will be the centerpiece of an innovation district within an innovation corridor emerging to foster, focus and support technology, ideas, startups and established enterprise.

The public-private initiative to bolster Houston’s innovation economy – or ecosystem, in tech-development speak – has buy-in from a network of the city’s academic institutions, entrepreneurial and business communities, and civic leadership.

At Urban Land Institute Houston’s 2019 spring conference held this week, an estimated 300 of the region’s real estate and land use leaders had an opportunity to hear more about the district’s inaugural project, which kicks off in May, and the long-term impact of the broader framework along the four-mile innovation corridor.

Located in Midtown, the district sits on Main Street between downtown and the Texas Medical Center, within three miles of five universities, on a Metro transit line and near an intersection of freeways.

Thacker summarized the district’s goals: significantly boost innovation, develop high quality jobs (lots of them and at all levels, not just high-tech), and reap financial results over time.

The property also includes the former Sears flagship store, circa 1939. A concrete behemoth in the Art Deco style, it was shuttered last year in anticipation of its soon-to-start transformation from retail to innovation hub.

Earlier this year the five-story building was rechristened as “The Ion.” As explained in that announcement, the name draws from the Greek word for “go” (ienai). And the suffix “–ion” appear in many words associated with the building’s mission: innovation, creation, inspiration and acceleration.

The Ion is not Rice-branded, Thacker noted. It is to be a shared, inclusive entity in its form, use and support, including by other four- and two-year academic institutions in the city as well as emerging and established enterprise.

Rice is contributing $100 million toward the inaugural project, which re-purposes and renovates the 270,000-square-foot landmark.

Early plans have indicated the building will retain and preserve signature elements of its era – such as the three-sided storefront, canopies and decorative tilework – while pushing more natural light to the bunker-like core, offices scaled to a variety of tenant uses, a venue for presentations and programs highlighting innovation process and a restaurant – for general use, not just tech tenants.

While The Ion’s expected completion is late 2020, pilot programs targeting the innovation spectrum will launch this fall and be held just up the innovation corridor at Houston Station, a tech incubator partner with a track record. Likely programming ranges from entrepreneurial workshop and thought-leadership conferences to industry lectures and networking.

In seeding the programming ahead of time, The Ion will open activated, said Houston Station CEO Gabriela Rowe, keynote panelist.

Houston already has innovators in many fields – energy, life sciences, manufacturing and aerospace, among them – but they have tended to be isolated and by-the-bootstrap endeavors, Rowe said, in part due to the city’s sprawl (more than 600 square miles) and wildcatter mentality.

“There has been no Petri dish for new ideas, no center of gravity for entrepreneurs,” she said.

The Ion is that center, providing density, programs and opportunities for “curated collisions” that spark collaboration, plus resources for where to go next.

So it’s an innovation hub – with spokes connecting within and beyond the district and corridor.

Go with what you know

Keynote panelist Kate Wittels of HRS, a consultant on tech community formation and infrastructure, said cities with innovation economies are built off their local industries. So Houston’s problem-solving applications will not be the same as in, say, Silicon Valley – or Austin. And another difference is the average age of Houston innovators – 41, perhaps reflecting the heavy industries that dominate the economy, she observed.

Wittels said that attracting and retaining a work force today requires facilities where the talent wants to be – not where the CEO wants to set up. What is offered in and at the workplace needs to consider not only how the box is designed but how it’s filled and what happens in it, she said.

And near it. The district’s long-term footprint would also incorporate related commercial development, housing, public spaces and what the rechristening announcement called “best-in-class infrastructure.”

In other words, an integrated neighborhood, not a corporate campus, Wittels said.

Then, now and next

The collaborative model supporting innovation isn’t a first for Houston industries, Rowe has said in previous appearances, pointing to Texas Medical Center and NASA as examples of how the city goes big to tackle big challenges.

Meanwhile, new players are joining the pipeline. Earlier this spring, MassChallenge, a global network of zero-equity startup accelerators, announced it would launch an inaugural startup cohort in Houston this summer. It’s the second Texas-based program for the Boston-based network. Its Austin location debuted a year ago, accelerated 84 companies and awarded $500,000 in equity-free cash in their program.

Central Houston and the Downtown Redevelopment Authority pursued the opportunity, supported by a five-year economic development from DRA to operate it in the innovation corridor.

Areas Most At Risk Of Hurricane-Force Wind And Storm Surge Damage
Investors to see $8B of supply to close out volatile June, Q2
Johnny Cash’s Former California Home Lists For $1.795 Million
Stocks making the biggest moves premarket: Winnebago, La-Z-Boy, Revlon and others
What is StrongBlock (STRONG) and how does it work?