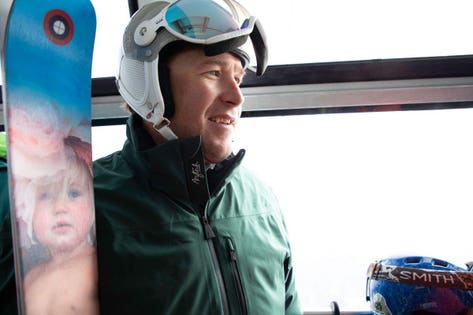 With a record six Olympic medals and two World Cup wins, Bode Miller is among the best  male alpine ski racers of all time. Two seasons into retirement, he still competes like a champion even though he’s done bombing slalom gates.

Miller is an equity partner and the chief innovation officer at Aztech Mountain, a performance fashion brand based in Aspen, and is part owner of Bomber, a custom ski company with a boutique factory in Italy.

Last October, four months after Miller and his wife, Morgan, lost their 19-month-old daughter in a drowning accident in a neighbor’s pool, the couple gave birth to a son. Miller says it has been the most challenging year of his life. “So much of my career was about crashing and screwing up and moving on, and in a way that equips you to deal with reality,” he says. “But nothing is worse than losing a child. I hope there’s nothing worse, because if there is, it’ll break you.”

This winter, Miller and the family are back on the slopes when they’re not home together in Orange County, California. Miller recently shared his picks for where to ski, what to wear and what gear to use this winter. Here’s what he recommends.

Jackson Hole is a pretty unique ski town. I first went there at the end of the nineties for races. Coming from New Hampshire, I was blown away to see a mountain like this, and the lift access to steep, gnarly terrain with cornices and chutes that’s normally only available if you’re skiing off-piste or heli-skiing. You look off the edge and it’s just these wicked open faces you can whip around.

I love staying at Caldera House, which is right in the center of Teton Village. It’s a hotel and club where the skiing component is part of a lifestyle. In Jackson, more so than almost anywhere else in the country, you can live the ski-bummy life in a way that’s actually very, very comfortable. A lot of the ski bums you see in town are billionaires. They know how to live well without being pretentious about it. So, at Caldera, you have a great chef, great cocktails, amazing rooms and service, and you’re just steps away from the mountain and tram. It’s a choice to come to the mountains, and not inexpensive, but the people who run this place really push themselves to create a standout experience for guests.

A couple years ago, I was doing a photo shoot in Portillo, Chile, when I grabbed an Aztech Mountain jacket from a big wardrobe the woman had laid out for me. The clothing was all pretty high end–Toni Sailer, Kjus, Canada Goose and all that. One of them was the Nuke Jacket from Aztech, and I put it on and loved it. It’s pretty nasty down in Chile. You’re up at 10,000 feet to start and go up from there, and the wind was blowing like crazy. I just kept gravitating back to the Aztech clothing because not only did it look the best but it kept me warm without being too technical looking. They also make clothes you can wear on the mountain but also feel stylish wearing in Manhattan.

I thought the brand had huge potential, and not long afterwards, I met Aztech’s founders, David Roth and Heifara Rutgers, at a party in New York. Great guys. They’re really smart and considerate about what makes great performance wear. I came onboard and have really been engaged with the whole process. After over 25 years of racing at that level, I have, like, a lame bachelor’s degree in 40 different things, including what works and what doesn’t with clothing when you’re skiing. I’m involved with everything from choosing colors to how the cuffs work, to the interior pocket materials. The cool thing is they’re a pretty small start-up type company so we make decisions together that really reflect the ideas of a handful of very passionate skiers and technical designers.

I am part owner and brand ambassador for Bomber, which makes performance custom skis out of their factory in Italy. They have a membership program for ski services and experiences, and the skis are true standouts. Wood core construction, all made by hand. They have an RFID chip in the back that lets you measure your performance. The skis are incredibly responsive and my philosophy aligns with the company’s in that we both think there’s a higher level of control and quality in small production lines rather than the commodity production of the big brands. I also love the look you can create through customization. I have a pair of Basquiat Bombers and they also made a pair for me with my daughter, Emmy’s, face on them, so I can ski with my baby girl.