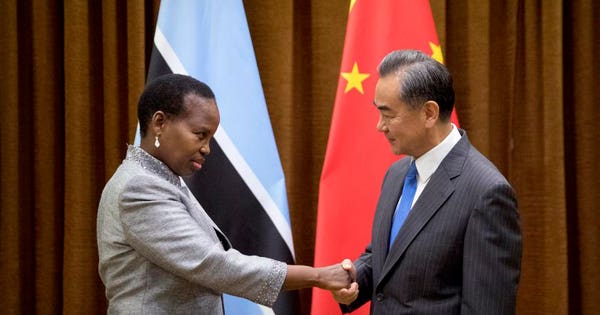 Chinese corporations are all over Africa.  In June 2017 a McKinsey & Company report estimated that there are more than 10,000 Chinese-owned firms operating in Africa.

What are Chinese corporations doing in Africa? That’s a highly controversial issue.

This is the view several African politicians have. The Zambian politician Michael Sata was one of them. At least he was before being elected President of Zambia in 2011. He wrote a paper presented to Harvard University in 2007 that said “European colonial exploitation in comparison to Chinese exploitation appears benign, because even though the commercial exploitation was just as bad, the colonial agents also invested in social and economic infrastructure services Chinese investment, on the other hand, is focused on taking out of Africa as much as can be taken out, without any regard to the welfare of the local people.” (quoted in Scott D. Taylor’s “The Nature of Chinese Capital in Africa, Current History, May 2018, p. 197)

Sata’s bold position got some support by a deadly blast at an explosives factory partly owned by the Chinese state killing 50 Zambian workers.

Globalization managed to skip Africa by for years. There were several reasons for this. Africa was considered to have poor infrastructure, political instability, and low income. “The trade in oil, gas, gems, metals and rare earth minerals wreaks havoc in Africa. During the years when Brazil, India, China and the other “emerging markets” have transformed their economies, Africa’s resource states remained tethered to the bottom of the industrial supply chain,” writes Tom Burgis in The Looting of Africa (New York: Perseus Books Group, 2015). While Africa accounts for about 30 per cent of the world’s reserves of hydrocarbons and minerals and 14 per cent of the world’s population, its share of global manufacturing stood in 2011 exactly where it stood in 2000: at 1 percent.

Everything changed when China came along. The country was desperate for raw materials and energy to power their growing manufacturing capacity. They put Africa on the globalization map. The continent was placed right next to Shanghai in terms of Beijing’s business priorities.

Africa was at the top of the Beijing economic agenda. It was an easy and convenient target. Chinese leaders sent business delegations to every capital in Africa year after year. These delegates secured infrastructure projects and proposed trade deals, converting Africa into a “second continent” for China. Metaphorically, that is.

Howard W. French describes the situation in the book China’s Second Continent (New York: Alfred A. Knopf, 2015), explaining; ““Sensing that Africa had been cast aside by the West in the wake of the Cold War, Beijing saw the continent as the perfect proving ground for some Chinese companies to cut their teeth in international business. It certainly did not hurt that Africa was also the repository of an immense share of global resources—raw materials that were vital both for China’s extraordinary ongoing industrial expansion and for its across-the-board push for national reconstruction.”

The long arm of globalization had touched Africa. Trade between China and the “second continent” of Africa reached close to $300 billion in 2015.

Not everyone feels that China is attempting to turn Africa into a Chinese colony though. One such person is Ching Kwan Lee, a professor at the University of California. Lee argued in the Specter of Global China: Politics, Labor, and Foreign Investment in Africa (University of Chicago Press, 2017) that the investments the Chinese state made in Africa weren’t made as “imperialists” or “colonialists”. Nor were ones by private corporations. Chinese corporations aren’t being motivated by profits. They have a long-term horizon in mind, and they make for good local citizens. The Chinese people in Africa pay their fair share of taxes to the countries they do business with. Lee goes so far as to contend that Chinese corporations actually promote African independence and autonomy, rather than the usual dependence that is associated with colonialism. China is helping Africa to stand by themselves, rather than making Africa dependent on them.

Maybe it would be best to avoid sharing this opinion with the Pakistanis and Sri Lankans that are heavily indebted to China. These are the people that are most at-risk of becoming modern-day colonies for Beijing.

Save for a Down Payment or Pay Off Student Loans?
Central African Republic president launches crypto initiative following Bitcoin adoption
If the Kremlin ever Wakes Up Things Will Go Badly for the West
Your financial liability to your government is infinite
Pending Home Sales See Surprise Rebound In May But Experts Warn Housing Market Is ‘Undergoing A Transition’