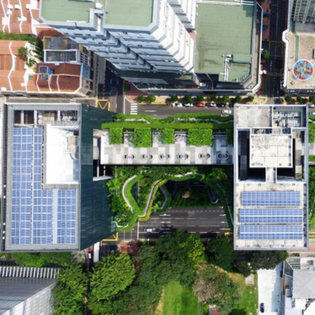 There’s no real estate market like New York. I don’t say that to be romantic or sentimental: The buying and selling of property in this city is much more complex and expensive than in other metro areas. The major steps being taken to ease the pressure on property owners in the city, however, deserve to be noted. One in particular has gone far too unheralded, and it just so happens to incentivize us to make one of the most beneficial (and simple) choices.

NYC Department of Buildings offers what’s known as the Solar Electric Generating System (SEGS) Tax Abatement. Since the solar panels alleviate some of the stress on the city’s electric grid, this program incentivizes builders by recouping them either 5% of the installation costs, annual property taxes, or $62,500, whichever is lowest — so the bigger the solar array, the better the savings. In a competitive city like this, large buildings can use every cost edge available to them. If you don’t think you could use $62,500 in saved costs, I’d wonder why you’re an entrepreneur at all.

But there’s reason for grave concern for NYC’s property owners: Their time to cash in through major solar installations is rapidly dwindling. The city tax credit, enacted in 2008, is nearing its 10-year expiration date and on the first of January, 2019, it will be no more. That cash break that could have gone toward other improvements and enticements for tenants will vanish. It’s unfortunate that an expiration date had to be put on a program that promoted both smart business practices and green technology implementation, but such is the nature of city bureaucracy. If you’re an owner in New York City, the time to install solar in your building is now.

Thankfully, these limits don’t extend outside the five boroughs. Both the state and the federal government offer similar benefits for those who adopt solar technology, so you’re not completely out in the cold. These programs offer similarly attractive benefits for adopters of this green tech, so if you’re even slightly interested in what solar can do, you’d be smart to check out the benefits.

New York State’s Megawatt Block Incentive gives an up-front rebate, dependent on the amount of power your residential or commercial solar array generates. The state also accounts for energy your solar panels put back into the grid. This net metering policy establishes a “credit bank” made up of the money you save the electric grid, which you can draw upon to help handle energy outlays later on, say, during the winter when heating costs rise.

Individual homeowners who make use of solar get a tax credit as well. New York State’s Residential Solar Credit offers residents 25% back, up to $5,000, on the costs of your solar equipment. That counts even if you lease your panels instead of buying; you’ll get those tax savings either way. So for those of us in the real estate sphere, installing solar at our properties and our homes allows us to “double dip” on credits and rebates in New York state. But that isn’t even the end of it.

The federal government also recognizes the good of spreading solar power throughout the country. Known as the investment tax credit (ITC), this program lets you deduct 30% of installation costs from your federal taxes. This one applies to both residential and commercial power and has no ceiling, meaning enormous savings are possible for major property owners who choose to take advantage. This program is scheduled to end in 2021 but will be reduced in size (to 26% in 2020, 22% in 2021) as time ticks away. There’s no reason to drag your feet on this decision.

I hate to feel like I’m beating the same drum over and over, but adopting solar power ought to be a simple choice for property owners. After paying the negligible (and incentive-slashed) installation costs, you’ll be generating energy to allay your power costs while ensuring a cleaner future at the same time. It’s not just for tree-huggers — today’s luxury clients have ever more choices for where they take up residence, and green energy isn’t just great for conservation, it’s great marketing.

There are a million and one ways to stand out in a crowded industry, but to keep that attention you’ve got to come from a place of integrity. Switching over to solar won’t just save you money; it’ll affirm for your potential clients that they’re making the right choice when they move into one of your buildings. Potential tenants will feel good about living in a space that’s helping save energy, and you’ll feel good about saving money on your power bills. It’s a win-win, and the considerable tax savings and rebates are the icing on the cake.

So even though the city is letting its solar tax abatement run its course, there’s no reason to despair for missing out. State and federal programs have NYC property owners covered, both residential and commercial. I’ve always considered the solar switch to be the easiest choice I’ve ever made in business — the sooner you get on board too, the greater the long-term benefits you’ll realize.

Inflation poses biggest threat to IIJA rollout: U.S. DOT official
Hot, Hot, Hot! Mortgage Purchase Applications UP 6% WoW, Refi Applications DOWN -3.1% WoW As Fed Keeps Massive Covid Stimulus In Place (AEI Home Price Index UP 17% YoY In May)
Advisor Group’s second big deal is largest of the year in its channel
Wechat to Prohibit Accounts From Providing Some NFT and Crypto Services
Will Global Markets Be Pushed Deeper Into Crisis By The Fed?